LUAIN -- On August 31, 1767, Henry Joy McCracken, leader of the United Irish rising in Antrim, was born in Belfast. McCracken was running a cotton factory by the age of 22. He and Thomas Russell organized the first Society of United Irishmen in Belfast in 1791. He was imprisoned…

On the outbreak of the War many of these Irish rushed to join the ranks, enlisting for 3 months. Some of these, serving under officers like…

This Week in the History of the Irish: August 23 - August 29

LUAIN -- On August 24, 1968, the Northern Ireland Civil Rights Association marched from Coalisland to Dungannon in County Tyrone in one of the first large-scale…

Born in Kinneigh, Co. Cork, Ricard O’Sullivan-Burke received his early education in Dunmanway where he seems to have developed a keen interest in the military. At the age of 15 years, he enlisted in the South Cork Light Infantry (Militia) and served at the barracks in Bandon, Kinsale, Limerick and Dublin. However, within three years Ricard had…

Colonel Knox Walker was in command of 2nd TN. Infantry Regt, a.k.a. “Irish Regiment”. Early uniforms made by the ladies of the city consisted of a dark, 8 button, frock coat,…

Led by the colourful, Brig-Gen. Thomas Francis Meagher, the Irish Brigade began Sept. 17th by crossing the Antietam at Pry’s Ford before joining the battle, like most of the II Corps, piecemeal. Gen. French trailed Sedgwick toward the West Woods before they veered southwards and the CS centre, where they encountered DH…

Originally organized at Fort Henry, TN., the 10th was comprised of men from the Nashville area, as well as, Humphreys, Giles, Davidson, and Montgomery counties of Tennessee. Initially serving at Ft. Henry the 720 men of the regiment were transferred to Ft. Donelson where it was part of Col. Heiman’s command which was surrendered in February…

Albert D.J. Cashier enlisted as a private in Company G, 95th Illinois Infantry in August 1862. Standing at 5 feet, 3 inches tall, he was… As August comes to a close, the fruits of summer show no signs of slowing down — lots of peaches, blackberries, plums, and nectarines available for snacking and baking. This tart recipe starts with a shortbread-like crust and is then filled with peaches and blackberries. (You can substitute…

This Week in the History of the Irish: August 16 - August 22 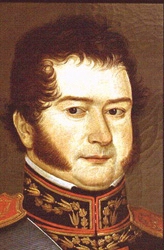 LUAIN -- On August 17, 1778, Bernardo O'Higgins , the father of Chilean independence, was born in Chile. Bernardo's mother was…

DOMHNAIGH -- On August 9, 1876, Josephine Bracken, whose parents were from Belfast, was born in Victoria City, British Hong Kong. Her father James, a soldier in the British army, was a native of County Offaly. Josephine's mother, a McBride, died in childbirth. She was…

Dan Breen was startled awake from his dozing slumber by the sound of tramping feet. The small room suddenly flashed to near daylight as a spotlight played across the window looking out to the back of the house. Breen leaped to his feet and grabbed his Mauser pistol off the chair where he had left… Fourteen Irishmen would receive the Medal of Honor for their actions during this battle.

The 14 men and their ships:

This Week in the History of the Irish: August 2 - August 8

DOMHNAIGH -- In the early morning hours of August 2, 1943, a small American torpedo boat was moving just west of New Georgia in the Solomon Islands. In command was a young…