Led by the colourful, Brig-Gen. Thomas Francis Meagher, the Irish Brigade began Sept. 17th by crossing the Antietam at Pry’s Ford before joining the battle, like most of the II Corps, piecemeal. Gen. French trailed Sedgwick toward the West Woods before they veered southwards and the CS centre, where they encountered DH Hill’s Division, frantically piling rail fences in front of a sunken road, and fierce CS resistance which halted the US, 3rd Division’s advance.

It was now that the Irish Brigade stepped up and “double-quicked” to their place in the front line. The 69th NY, being the most senior regiment in the brigade, took the lead and were followed, in order, by 29th Mass, 63rd & 88th NY, disposing their excess equipment in a cornfield near the Roulette Farm. On the right of the line of battle, the Irish Brigade began to move forward, coming under heavy artillery fire as soon as they came into view and suffering casualties. On reaching the fence, CS skirmishers raked the Irish line causing two of the 88th NY, both ex-British soldiers, to find rifled Enfield muskets and engage the enemy.

The line, again, halted briefly and orders were given to lie down to allow battle debris to be cleared from their front. As soon as this had been done, the Irish raised up, dressed ranks and advanced once more. With the CS artillery fire was opening huge gaps in the Irish line, the highly experienced Irishmen, simply closed ranks and continued to advance, men still falling and the Brigade’s chaplains, Fr. Corby and Fr. Ouellet administering to those men, as they, themselves, kept up with the regiment. Closing on the CS line, Gen. Meagher raised himself on his saddle to rally his men and, with artillery shells exploding around him, cried: “Boys! Raise the colours and follow me!!”

The men of Posey’s 16th Mississippi left the fence and went to meet the Irish advance, the CS volley caused the left flank of the 63rd NY to disintegrate, but on seeing this the remainder of the Irish Brigade turned and poured fire upon the Mississippians, nearly wiping them out. By now the Irish were within 50 yards of their foe, Meagher’s brigade fired volley after volley into the CS line but they could not break it, with the CS line returning fire. Some of the Irish took it upon themselves to charge the fence, but they shortened their lives in doing so. Gen. Meagher’s horse had been hit, causing the General to fall and hit his head on the ground, leaving him so badly shaken that he had to be carried from the field. All the time, the Irish Brigade traded volleys with the CS, the casualty rate continually rising on both sides., for over half an hour the bloodbath continued with musket barrels becoming red-hot. 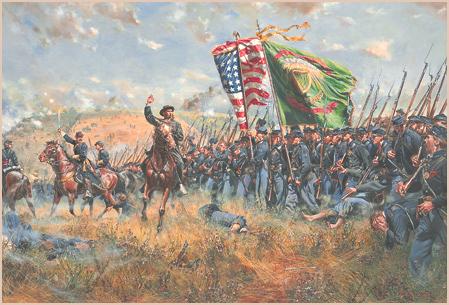 Gen. McClellan watched the unfolding events from a nearby hilltop. He saw the green flags fall, rise and fall again with such regularity that an aide is said to have cried: “The day is lost, General—The Irish fly!”, but the US commander, calmly replied: “No, no! Their flags are up– they are charging!!”.

(Left: Father Corby blesses the Irish Brigade as they begin their advance on "The Sunken Road" at Antietam in “Sons of Erin” by Don Troiani.)

By now, the commander of the 1st Division, Gen. Israel Richardson, was so concerned at the plight of the Irish Brigade, that he ordered Gen. Caldwell to relieve the badly battered Irish. Caldwell’s men moved in behind the Irish and, as if they were on the parade ground, the exhausted Irish broke by companies to the rear. Leaving over 100 dead and 400 wounded on the field, the actions of the Irish Brigade had paved the way for Gen. Caldwell’s men to continue the fight and, eventually, take the CS position.

The Irish Brigade had, once again, lived up to its hard-earned reputation.