“Members of Glasnevin Trust, the Jesuit Community, members of the public and fellow “Pards”. Let me first begin by acknowledging and giving sincere thanks to Father Tom Leyden, Superior of the Jesuit Order and George McCullough, Glasnevin Trust for their kind permission to allow us to gather here today to honour Father John Bannon on the centenary anniversary of his death. Thank you all.

Born on December 29, 1829, in Rooskey, County Roscommon, John Bannon would become one of the leading lights of the Confederate cause in Ireland.

He began his clerical studies in 1847 and was ordained six years later. Shortly after, the new cleric opted to administer his duties in the far-off city of St. Louis, Missouri, U.S.A., at that time home to approximately 10,000 Irishmen.

A noted hard-worker amongst the Irish poor, especially in an area known as the “Kerry Patch,” so-called due to the large number of Kerry and Cork natives living there, Father Bannon was to the forefront of fundraising for a new church, named St. John the Apostle and was the chief supervisor of its construction.

By the late 1850s when war fever was taking hold across America, Father Bannon, like many of his parishioners, joined a local militia unit, “The Washington Blues” commanded by Captain Kelly and when war was declared, Father Bannon was appointed as chaplain of 1st Missouri Confederate Brigade, under the command of General Sterling Price. The priest quickly endeared himself to the troops and General Officers by regularly putting himself in the line of fire and disregarding any personnel danger. Father Bannon, at the Battle of Pea Ridge, even disobeyed the Confederate army commander Earl van Dorn, who was told by the cleric:

"General, I serve a much higher rank than you!”

The Irishman was allowed to continue his work on the battlefield.

Times of battle proved to the busiest for Father Bannon: Before a battle, he was to be found moving from campfire to campfire hearing the confessions of the many Irish within the ranks of the Missouri brigade; during the battle, he was to be seen going to tend and give comfort, as best he could, to the wounded, while in the aftermath of the fight, he was administering the last rites to those who had died. 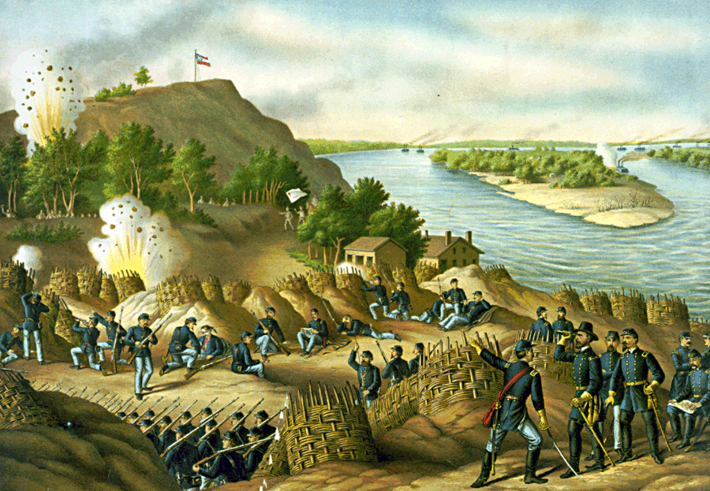 Among the battles Father Bannon was present at were Pea Ridge, Farmington, Iuka, Corinth; Champion Hill and Vicksburg.

(Left: Siege of Vicksburg by Kurz and Allison.)

He was among the Confederate prisoners taken at Vicksburg in July 1863. Paroled the following month at Mobile, Alabama, he traveled to Richmond, Virginia, where he was invited to a meeting with Jefferson Davis, president of the Confederacy. At this meeting, he was asked by the president to undertake, on behalf of the Confederacy, a mission to his native land and discourage his fellow countrymen from enlisting in the Union army. Prior to this, he was asked to take a letter, from Davis, to the Vatican and His Holiness Pope Pius IX seeking papal intercession.

Although no formal recognition of the Confederacy was received from the Vatican, Father Bannon was asked to forward a letter from His Holiness addressed to “The Illustrious and Honourable Jefferson Davis, President Confederate States of America” -- this, in diplomatic terms, (was thought to be) a “de facto” recognition of the Confederacy as an independent state and caused a huge uproar in the United States.

Father John Bannon set foot, once again, on his native land in late October 1863 and threw himself, zealously, into his cause, but before taking some time to contact the relatives of some 50 of his former Missouri comrades to inform them of their deaths

In the following months, Bannon traveled the length and breadth of Ireland urging any Irish thinking of emigrating NOT to join the Union army, he had thousands of hand-bills printed with a similar message and organized their distribution at the many seaports around Ireland. Further to this, he had posters printed and distributed to every church in the land; this poster displayed the exchange of letters between President Davis and the Pope and was joined by the following words, which Father Bannon himself, wrote:

“As a priest of the Catholic Church, I am anxious to see the desires of the Holy Father realized speedily – therefore I have taken this means to lay before you the expression of his sentiments on the subject of the American War, knowing that no Catholic will persevere in the advocacy of an aggression condemned by his Holiness.”

By May 1864, when Father Bannon’s mission in Ireland ceased, the enlistment of Irishmen in the Union army had dropped by two-thirds. He duly advised Confederate Secretary of War Judah Benjamin that his funds were depleted; Bannon was allowed to leave the service with the thanks of the secretary and a bonus of $3,000.

August 1864 saw Father Bannon enter the Jesuit Seminary at Milltown and was soon appointed to St. Francis Xavier parish in Dublin. He remained there, carrying out his priestly duties, even being made superior of the parish between 1884-89. Bannon never forgot his wartime experiences and never lost his admiration for the Confederacy and, while he rarely spoke publicly about the war in America, it seems that he often regaled Jesuit students with stories of his time there to such an extent that they became so enthused, the older man was ordered by the Jesuit superior to stop such talk. As the years passed by, Father Bannon was visited on many occasions by former Missouri comrades, traveling Europe. These men made it a point to pay a visit to Ireland, especially to meet with their former chaplain and these meetings went on for many hours.

Fr. John Bannon died, early on the morning of July 14, 1913. His funeral was attended by over 80 priests representing different orders, churches, parishes and dioceses throughout Ireland at the very spot where we stand today.

At this point, Sgt. McAlister stepped out again to end the proceeding with this verse from the pen of Theodore O’Hara, Col. 33rd Alabama Inf., C.S.A.:

Talk about mixed messages; the Confederacy ?

It seems that there was quite a large contingent of Irish Protestants in the South, with their support of the Confederacy.

Daniel, there were many thousands of Irish Catholics in the south that fought for the Confederacy as well. This was especially true with some Louisiana regiments, as New Orleans was a fairly major destination for Irish Catholic immigrants in the years before the war. I don't think most of the common soldiers in the Confederate army saw themselves as fighting to preserve slavery. People tend to band together with their neighbors against people from far away. I don't think most of these Irishmen who enlisted in the Confederacy looked on secession the same way we do, looking back from over 150 years in the future.

Your comments are erudite and make sense.

Thanks for your comment Daniel. I see that Joe got to answer before I could do so. I agree with all that Joe said about the Irish fighting for the South. Irishmen tended to integrate better in the South-maybe because it was a more agrarian society and the hard work that went with farming etc suited those immigrants that made their homes in the South. These Irish embedded themselves in their new homes and applied themselves and became accepted by the neighbours. So when War came, Irishmen thought it only proper and correct to stand shoulder-to-shoulder with their neighbours in their time of strife. One other aspect, which I have read in a few books, diaries is that some Irish felt that the Northern States trying to suppress the rights of the Southern States was akin to Britain's subjugation of Ireland.

Anyway all I know is what I have read and studied, but living in the 20th & 21st century makes it impossible to speak to any of the participants so we are left to draw our own conclusions and agree to disagree about these. IMO War has never really solved anything.

My book "organized labor" detail the history of my Family from Ireland to owning the Landmark Tavern on 46th St where my Grandmother was born there in 1887.

Very odd memory of very rich Irish merchants when I visited Charleston to apply for a job at the Spoleto Festival which is mentioned in my Exits % entrances book on 30 years Off-Broadway too..

Happy to hear from both of you.