Australia: How Did The Irish Get There? 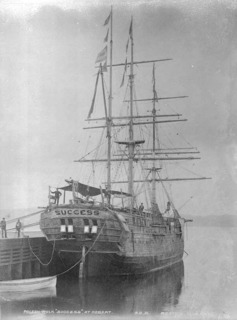 Any cursory look at the population of Australia will turn up a large percentage of Irish surnames among the population. One might be tempted to ask how so many people from such a poor nation manage to emigrate there. The answer to that question is that, although some emigrated voluntarily, especially from the 1840s onward, a very large number of them never paid for the passage to Australia, they came as the guests of the British Empire.

For many years the English, as a way to lessen prison over crowding and make a profit to boot, had sold convicts to shipping contractors, who then sold these men and women to planters in the New World as indentured servants, usually for terms of seven years or longer. But with the coming of the American Revolution and with the growing preference in the Americas for black slaves, whose labor was bought for life, a new destination had to be found for these surplus convicts.

In 1786 the English found this new destination: Botany Bay in eastern Australia. Although Botany Bay itself soon proved to be an unsuitable location for a penal colony and the colony was moved to Port Jackson, near what is now Sydney, the name Botany Bay entered Irish folklore as the destination of all convicts. The first convict ship with solely Irish convicts was the "Queen" in 1791; the last Irish convict ship arrived in Australia in August of 1853. Though that marked the end of ships leaving Ireland for the sole purpose of transporting convicts to Australia, convicts were still shipped there until 1868, the last ship to arrive included 62 Fenians who had participated in the 1867 rising. In the end perhaps as many as 40,000 Irish men, women, and children had been transported, the euphemism the British used for deportation, to Australia.

(A government jail gang in Sydney in 1830 by Augustus Earle.National Library of Australia.) Certainly most Irish then and now would quarrel with the term convict being applied to most of those who were transported. Many were unquestionably political prisoners, those transported for the 1798 rising, Young Irelanders such as Thomas Francis Meagher and John Mitchel , and many Fenians later. But if we look at some of the crimes committed by others who were transported: theft of linen, a shirt, a handkerchief, many for stealing sheep and cattle, turnips, corn, or potatoes (many of these later offenses during the Famine), it is obvious that if not political prisoners per se these people were, at the very least, victims of a corrupt political system. Some of those who were transported were as young as eleven or twelve. Considering the impossibly low standard of living that was imposed on the native Irish population, living in a land of abundance, and even without imposing the values of the 1990's, how can the English colonial system in Ireland be looked on by any unbiased person as anything but incredibly corrupt.

(Below: Flogging a convict at Moreton Bay, 1836 - Artist unknown) 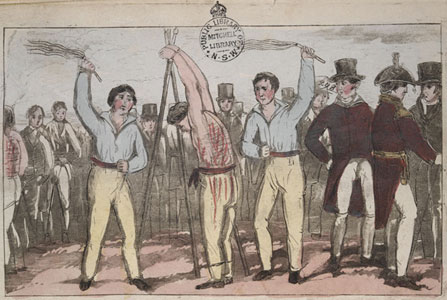 The Irish who were transported to Australia for what are, today, the most minor of offenses, offenses they were often driven to by extremes of poverty, were torn from family, friends, and a country many of them loved dearly. They endured a perilous journey which often included brutal treatment by the ships crews: flogging, handcuffing, chaining, and other indignities. In Australia they were forced to do hard physical labor, often on short rations and were punished if they didn't attend Anglican services. Catholic masses were not permanently allowed in the penal colony until 1820.

The vast majority of the Irish who were transported to Australia were ordinary people who did what they had to do to survive, most never again saw the land and people they loved. For many years Australians were reluctant to study or talk about the history of the so-called convicts from whom many of them descend. That is unfortunate because Australia is a richer land today for their suffering. Their history and their contributions to the building of Austrailia should not be forgotten. - Joseph Gannon

Thank you for a very interesting article. It reminds me of two things, one serious and one not so serious. The serious one is to recommend Robert Hughes's great book The Fatal Shore to anybody who wishes to learn more about the early history of Australia.

The not so serious reminder is about the young Irish lad who turned up in Australia without the right paperwork and was subject to questioning about how fit an Aussie he could become if he was let in. The Border Police officer asked him if he had a criminal record. The young lad's reply was, 'I didn't think I needed one anymore.' Needless to say, after a reply like that, he was sent back home on the next plane out.

Transportations to Australia did not really end in 1968. In fact the transportation of children, some of them orphaned, some of them merely the children of poor people, to Australia continued beyond the middle of the 20th century. In her very moving book, published in the US under the title: 'Oranges and Sunshine' , and in the UK as 'Oranges and Sunshine: Empty Cradles', Margaret Humphreys tells some tearfully tragic but true accounts of physical and sexual abuse and of mothers wrongly told their children had died, children told their parents did not want them, etc. Even some of the children of women who had signed up to war work in WW2 were taken away from them and never returned.

Sharp proof reading eye there, Ger! Thank you for a great blog, Joe Gannon - one needs regular, sharp reminders of the unspeakable horrors inflicted by the powerful on the poor, by those who would have considered themselves to be 'upright, God fearing citizens.

It is interesting to note that thousands of Irish people are moving to Australia today.