Born in Kinneigh, Co. Cork, Ricard O’Sullivan-Burke received his early education in Dunmanway where he seems to have developed a keen interest in the military. At the age of 15 years, he enlisted in the South Cork Light Infantry (Militia) and served at the barracks in Bandon, Kinsale, Limerick and Dublin. However, within three years Ricard had deserted and took a ship to, of all places, London (!) before carrying onto the United States and New York City. The young man then roamed through Mexico and South America, returning to the US just before War broke out.

When it did, O’Sullivan-Burke enlisted in the 15th NY Light Artillery but the enlistment was declared illegal and, therefore, void. The young man, immediately, went to the recruiting depot of the 15th NY Engineers and promptly reenlisted and was on the field, as colour-bearer, at 1st Bull Run for which he was promoted to Quarter-Master Sergeant. Following the Federal retreat, the 15th went into intensive engineer training and O’Sullivan-Burke became known for his proficiency in this.

During the War, O’Sullivan-Burke and his regiment saw action at Yorktown, Battle of Gloucester, the “7 Days Battles” and, finally at Fredericksburg in December 1862. Indeed while here, he was part of a Union detachment building a bridge over the Rappahannock, when they getting supplies when they came across an elderly man’s home, who attempted to lure him inside. However, O’Sullivan-Burke noticed the man’s nervousness and he ordered the man to open the door fully. Inside were 3 CS soldiers, the Irishman was gracious as he allowed his adversaries return to their lines and giving the old man a pardon.

During 1863, now a 1st Lt., O’Sullivan-Burke was assigned to the staff of the Chief Engineer at Gen. Grant’s HQ, near Petersburg, Virginia- a position he held until War’s end. While kept busy with Grant’s Army of The Potomac, the Irishman still found time to think of his home country’s future by becoming involved with one of the many “Fenian circles” active within the Union army, becoming head of “The Brothers Sheares Circle” ad plotting against British rule in Ireland. 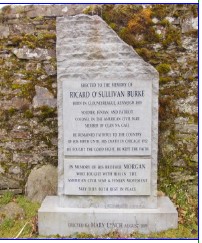 Mustered out of the army on 13 June 1865, O’Sullivan-Burke travelled to New York and meet with Fenian Brotherhood chief, John O’Mahony before returning to Ireland where he participated in many Fenian activities, both, in Ireland and the United Kingdom where he allegedly led the rescue of three political prisoners in Manchester in 1867; “The Manchester Martyrs”.

In 1873, Ricard O’Sullivan-Burke returned to the US where he met his future wife, Mary Sheehy, at Fort Wayne, Indiana. They soon married and had two children, Richard Jr. and Nellie.

Col. Ricard O’Sullivan-Burke died in Chicago, Illinois in 1922 and is buried in the Mount Olivet Cemetery.