By late 1850, both Mary and her brother were living in New Orleans where she earned a living (and had an excellent reputation) as a teacher of English, French, and music up until the outbreak of War in 1861. It was around this time that the siblings quarreled and Samuel, in a fit of pique, enlisted in Co. F, 6th LA. Infantry. Mary did all she could to have her brother discharged, as she felt that he was not cut out to be a soldier, but even a letter to the British Consul was to no avail and, so, Mary Hill went off to War to “keep an eye on her brother”!, following the 6th to Virginia.

Here she found work in the field hospitals after the battle of 1st Manassas and the many other battles and skirmishes involving the 6th, throughout the Dominion State. Soon Mary was not only caring for her brother but all the members of the regiment that were wounded or became ill. Such was her dedication that her efforts were widely recognized by officers and privates alike in their reports and letters. During the Seven Days battles around Richmond, Mary was matron of the Louisiana hospital seen, by many, as an angel of mercy and subsequently became known as: “The Florence Nightingale of The Army of Northern Virginia”.

1863 saw Mary return to Ireland on family business, being allowed to leave through New Orleans by permission of the city’s Provost-Marshall. However, while she was in Ireland, charges were brought against her that she was a Confederate spy and Mary Hill was duly arrested and imprisoned, in the Julia Street prison, upon her return to New Orleans. The charges were carrying a forged letter to an unknown CS General and other letters for the enemy between the lines along with clothes and food. The last two charges, Mary acknowledged as the letters, clothes, and food were all for her brother!! The other charge she fought and during her trial, she questioned why she was arrested while there were, at least, 3 other ladies by the name of “Mary Hill” in New Orleans at the same time.

Mary was convicted and imprisoned for a number of months, suffering harsh treatment and cruelty before eventually being released when the British Consul pointed out that she was a British subject. Indeed after the War, Mary's health suffered badly due to her imprisonment and she was considered an invalid, so she brought an unsuccessful claim against the US Government for compensation. 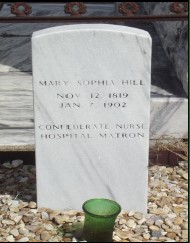 However she did spend time in the newly instituted hospital, a Soldiers Home for those veterans of the Armies of Northern Virginia and Tennessee, rising to the post of matron, a position she took no pay for as it was yet to be on a firm financial footing.

She moved to Brooklyn, NY where she lived with her nephew until her death from cancer on January 7, 1902.

Mary Sophia Hill stipulated that, upon death, she be buried in New Orleans and when the train bearing her body arrived in that city, it was met by aging men in gray uniforms (her devoted brother, Samuel, was too ill to attend) who accompanied her to the Greenwood Cemetery, her final resting place.

In 2005, the President of the Louisiana Division of the UDC unveiled a granite grave marker to the Confederate nurse from across the ocean.