Last week, owing to the confluence of three events -- a massive head cold (no fever), our COVID-19 pandemic quarantine and the Lenten season -- I determined… Social distance. Work from home. Shelter in place. Self-quarantine. The new normal appears to be upon us, whether we like it or not. As much as I would prefer to be out and about, I do find solace in my kitchen, and this new confinement has given me the time to bake some brown soda bread recipes…

(right) defeated the Spanish at the battle of Maipo River,…

LUAIN -- On March 30, 1873, Richard Church (left), of County Cork, soldier, sometimes called the "liberator of Greece," died in Athens. Church was born in Cork in 1784. As a young man, he ran off to join the British army. As ensign in the 13th (Somersetshire) Light Infantry he…

In the last week of July 431 A.D., Patricius left his residence at Ard Mhacha and traveled with his retinue south toward the kingdom of Midhe. He had been summoned, by royal decree, to a meeting with the reigning monarch, king Laoghaire Mac Neill at the court at Tara. His journey would take him along…

I Just Love a Good Mystery!

Those pictured above -- more likely both of them -- had witnessed and survived another pandemic, the Irish Famine, where generations of whole families were swept away by starvation, typhoid and influenza. Their weather-beaten lined faces tell a story of resilience, and perhaps… 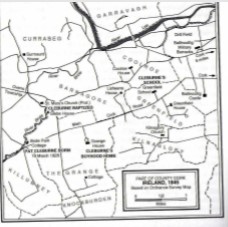 On the day following Christmas 1849, the barque “Bridgetown” finally docked in New Orleans and its 258 passengers disembarked. One of the cabin passengers was a 21 year old Irishman who was destined to become the recipient of great admiration, devotion and loyalty especially during the last four…