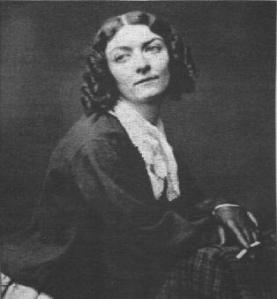 Her name was Lola, she was a showgirl… so far, so true (and with thanks to Barry Manilow), but this particular Lola  also happened to be one of Europe’s most beautiful and talked-about women, who married several times and who was linked to some of the most prominent men in Europe.

Lola Montez… the name is redolent of exotic allure, and she certainly didn’t disappoint. Lola’s reputation for being a beautiful and temperamental seductress who could wrap men around her finger was well deserved, but what wasn’t so well known at the time was that she was actually Irish.

Eliza Rosanna Gilbert was born in Grange, County Sligo, in 1821 (or 1818, depending on which articles you read) to Elizabeth Oliver, daughter of the former High Sheriff of Cork, and Edward Gilbert, an army officer, who took his family off to a posting in India soon after the birth.

Shortly after their arrival, Eliza’s father died of cholera. Elizabeth remarried the following year, and sent Eliza back to England to be raised by her husband’s relatives.

Young Eliza had an independent streak, a trait she showed in 1837, when she eloped with a Lieutenant Thomas James. After five years together, they separated and she became a professional dancer. In June of 1843, Eliza appeared on a London stage as “Lola Montez, the Spanish dancer.”

Unfortunately for her, she was recognised and it soon became the talk of London that the sexy dancer called Lola was none other than Mrs. James, the wife of a British officer.

It all became too much and Lola headed to Paris where she worked as a dancer, enjoying the attention of a string of lovers, including composer Franz Liszt and author Alexandre Dumas. France got a little too hot, however, following the death of one of her lovers in a duel.

The stories of Lola’s cavorting are legion – she is said to have danced her way around the globe, to have privately ‘entertained’ the Tsar of Russia, and been paid one thousand roubles for her efforts. She is also said to have refused a fortune to be the mistress of the Viceroy of Poland and was even implicated in the alleged murder of a man on a riverboat in Fiji.

King Ludwig I of Bavaria

By 1846, Lola was in Munich and it is at this point that her career as a courtesan really took off when she caught the eye of Ludwig I of Bavaria. The story goes that Ludwig rather crudely asked her in public whether her bosom was real. Lola quashed any doubts by tearing open her dress to prove that it was.

From that point on Ludwig was hooked… so much so that he gave her a palace, lots of money from the public purse, and made her Countess of Landsfeld in 1847.

Europe at this time was fizzling with revolution. Rebellions would take place in Ireland, France and Belgium in that year and political intrigue was rife throughout the continent. Bavaria was in the thick of it.

For more than a year, she exercised great political power, encouraging support for liberalism at the expense of arch conservatives. In fact, her influence became so great that the conservative administration of Karl von Abel was dismissed because Von Abel objected to her being made a Countess.

Bavaria’s university students were divided in their sympathies, and conflicts arose, leading Ludwig, at Lola’s instigation, to close the university, which in turn led to further unrest as traders came out in support of the students.

In March 1848, under pressure from a growing revolutionary movement, the university was re-opened and Ludwig abdicated. Montez fled to London later that year where she met married George Trafford Heald, a young and wealthy cavalry officer.

However, the terms of her divorce from Thomas James did not permit remarriage while either party was living, and Lola and her new husband had to flee to France, and later Spain, to escape a bigamy action. This marriage didn’t last either. In 1851, Lola set off to make a new start in America.

For over a year she performed as a dancer and actress in the eastern United States, one of her offerings being a play called Lola Montez in Bavaria. In 1853, she moved to San Francisco, marrying journalist Patrick Hull in July.

That marriage failed, too. Nearly two years later Montez departed for a tour of the Australian gold fields. Here she performed her risque Spider Dance, in which she would find spiders in her clothing, peeling layer after layer off until she was naked. The routine caused outrage and rapture in equal measure.

Any hopes she had of bagging herself a rich miner came to nothing, though. All that Lola managed to get was a bad review from The Ballarat Times. After reading it, she attacked the paper’s editor with a whip – something which she was quite fond of doing, apparently.

Lola was thoroughly fed up with Australia and departed for America in 1856. Back in the States, she lectured and wrote several books on beauty and deportment. Though achieving a modicum of success, she was never again to enjoy the fame and influence of her days as Ludwig’s mistress. She contracted pneumonia and died penniless in Brooklyn in 1861.

It had been a whirlwind life for Sligo-born Eliza Gilbert aka Lola Montez, the woman whose dance routines and sex appeal had set stages alight around the world. However, she wasn’t the only Irish Eliza setting influential hearts aflutter.

There was another Eliza, a contemporary of Gilbert’s, who would achieve equal notoriety in South America and go down in history as the ‘Queen of Paraguay.'

Born in Charleville, County Cork, on March 6, 1835, Eliza Alicia Lynch left Ireland aged seven and moved to Paris. Ten years later she was married to a French army officer, who was posted to Algeria.

That didn’t last long and soon young Eliza Lynch was back in France, having left her husband. Eliza wangled her way into the salon of Princess Mathilde Bonaparte. It is suggested that she was a courtesan to wealthy men during this period.

In 1854, though, she managed to catch the eye of General Francisco Solano Lopez, heir apparent to the Paraguyan presidency and one of the richest men in South America.

Lopez loved her, and brought Eliza back with him to his homeland that same year.

The pair never wed, despite Eliza’s own marriage having being annulled. Nevertheless, she did bear him six children.

Francisco succeeded his father as president in 1862, with Eliza becoming de facto first lady. She would spend the next 15 years as the most powerful woman in the country, leading the way in the fashion, arts and culture scenes.

Things changed, though, when Lopez embroiled his country in the vicious War of Triple Alliamce, in which Paraguay was pitted against the combined forces of Brazil, Argentina and Uruguay.

The war was a brutal affair in which up to 90pc of Paraguay’s men would die and almost 50pc of its women.

Eliza accompanied López during the entire war and was present when he and their eldest son were killed in Cerro Cora on March 1, 1870. She buried them both with her bare hands before being taken prisoner.

Madam Lynch, as she was known, fled to Europe with her children, dying in obscurity in Paris on July 27, 1886. In Paraguay, she is celebrated for her courage and loyalty through that bitter war period.

Over a hundred years after her death, Eliza’s body was exhumed and re-interred in Paraguay’s national cemetery. However, it is only in recent times that the life of this extraordinary woman has been brought to light in the country of her birth.

Two extraordinary Irish women… two Elizas… contemporaries who made places for themselves on the world stage at a time when females were meant to be seen and not heard. Rare women, indeed, and ones worth celebrating.

Rare women indeed . In that era; in Ireland , women were earning their living by Prostitution. What's changed over the years . Absolutely nothing ; women get slated and vilified for using the bodys to make a living . Men get clapped on the back  and told "nice one mate".

A lovey story David Lawlor ; nice to know that some of the women of Ireland; were actually  uplifted  in life for services rendered .

Glad you liked it. They were great women. It's a pity they aen't recognised as such in their homeland

I know what you're saying, but I do think that there is, finally, some recognition being given - at least for the women who fought for Irish freedom. There's an excellent book, recently published, called Women of the Irish Revolution (Mercier), by Liz Gilis. There are some great photos in it and it gives potted histories of the women and the role they played. Well worth a look. In fact, I might just write a blog post about it.

And this account from fellow member Jim Goulding about Eliza Lynch: http://thewildgeese.irish/profiles/blogs/eliza-lynch-the-paramour-o...

I like the cigarette in Lola's pose -- very bold!

Well I must say ; good on you girls, Lola and Eliza  ; you did what you could with the talents that you had available to you . Love the video ; and yes I too like the pose with the cigarette.

When some  youngster here in England are said to prostituting themselves to pay their way through University; Lola and Eliza  were way before their time '' in getting to the top''   -- albeit not through academia . !!!

Mr. Lawlor, yet again, I am thrilled with your writing style! Such a gift to present facts so engagingly. You are an asset to the written word, indeed. And what a story of these two women who maneuvered through life on the string of their feminine wiles!  I just loved this post; thank you so much!

Great video, Gerry, and an excellent post by Jim Goulding.

Using one's wiles to get ahead is nothing knew - they just happen to do it better than most, Mary.

Thanks again for the complimetnt, Claire. I'm glad you liked the article!