Michael Collins sat hunched over the small office desk, studying the papers before him. Liam waited, watching as the head of the IRA, Minister of Intelligence and Minister for Finance hurriedly wrote a series of notes and slipped them into tiny envelopes. There was efficiency to the movements, not a panicked rush. Liam could see that he was tall and well set. There was a vibrant air about him, too, even when seated.

‘I told the lads outside that there’s a raid going on just down the road,’ he ventured, still watching.

The pen never faltered. ‘Don’t worry about that. The boys will give good warning if they come our way, and sky lights make for great escape hatches.’

Collins’s eye flicked up towards the small window in the roof before returning to his work. When he was finished he put the fountain pen away and sat back, studying the man before him.

‘Relax there, will you and sit down… this isn’t a parade ground.’

Liam did as he was asked.

‘I’m hearin’ great things about you, Liam. That business with the County Inspector – what was his name, Webber – a few months back was well handled and I hear you’ve been hard at work since your little exile. If we had more of your kind the Brits would be wavin’ the white flag over Dublin Castle.’

‘I don’t know about that, sir. There are plenty of good men out there, and that hasn’t happened yet.’

Collins lost some of his cheeriness. ‘You’re right, there are good men; just not enough and with not enough weapons either. Who am I trying to tell – sure, you know yourself… you can see it on the ground when you pull a trigger and hear a click because the last bullet is already gone. That’s why something has to change.’ He reached around and took a piece of paper from his inside jacket pocket. ‘Here,’ he said, shoving it across the desk, ‘have a read of that.’

Liam took up the note and read, his eyes widening with each word.

To: Officers Commanding All Units

In view of conversations now being entered into by our Government with the Government of Great Britain and in pursuance of mutual understandings to suspend hostilities during these conversations, active operations by our troops will be suspended as from Monday July Eleventh.

It was signed by the Chief of Staff, General Mulcahy. Collins beckoned with his fingers and the paper was duly returned.

‘You’re in a small circle Liam, there’s only a handful of people who know about that. The order will be going out to brigades around the country later today. This fight can’t go on forever, not that you’d think it from some of the guff being spouted from people who ought to know better. There are those out there who think we can whip the Brits with one hand tied behind our backs and a pint of porter in the other. They don’t understand the reality of the situation… how desperate things really are.’

Liam nodded. ‘You’re right. It’s all we can do to mount an attack some days. But why are you telling me this, sir?’

Collins stretched back, working at the kinks in his neck. Dark rings ran beneath his eyes and his face was pale. ‘One thing we all learned back in ‘Sixteen is that timing is vital to achieve success. That bit of paper took a lot of to–ing and fro–ing before it could be agreed. Tell me, Liam, have ye heard of a fella by the name of Alfred Cope?’

Liam thought a moment. ‘The name’s familiar. Is he a big wig up in Dublin Castle?’

‘That he is boy. Assistant Under–Secretary Alfred Cope – Andy to his pals – is one of a rare breed… an Englishman with a good political brain for what goes on over here. He’s been trying to get us all around a table for a few months now. There was a man he used – a British intelligence officer by the name of Powell – who acted as a kind of intermediary in the early days when this was being raised by the Brits. I’ve no time for the British secret service, but Powell and Andy were different. 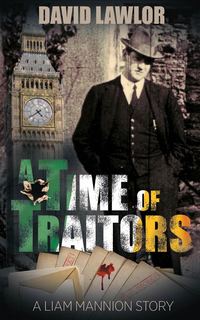 ‘It now turns out that Powell is dead – stabbed in a London alley a few days ago. Now, it might be a coincidence … that the man who was a key courier in the lead up to this truce winds up dead just as it is due to come into effect, but I’m not much for coincidence myself.’

Collins leaned forward in his chair. ‘This is important. This truce could be the beginning of the end. There’ll be talks. They won’t be easy, of course. We won’t be going into those meetings cap in hand, but if there’s a deal to be struck I want it made.’ He paused to rub the tiredness away. ‘I’ve heard whispers… not even that, actually, but I fear there are those who would do all in their power to stop that happening. They are close by, too.’

‘What do you mean?’ asked Liam

‘Maybe one of them got wind of this truce and tried to stop it before it even got started. Maybe Powell’s death is some sort of warning, not to pursue negotiations. Maybe they think we can defeat the Brits without sitting around a table.’

‘That it is, but there is one thing I’m certain of: I didn’t order Powell’s murder. I’m not even sure how others even got to know about him, but I think they did.’

Collins stood and walked around the desk to Liam and looked him in the eye. ‘I’ve had you checked out – you’re a bit of a loner, you don’t seem to hold with factions.’

‘That’s right boy, it is coming down to that already – whether you are with De Valera or Collins – The Long Fella or The Big Fella. I want you to go over there, to London… look into this murder and see what you can find out.’

Collins ignored the question. ‘I believe a Superintendent Caviston is heading up the investigation. Does that name ring any bells with you?’

Liam shrugged. ‘There was a Caviston running Drogheda station when I was in the Tans, but he’s an RIC man.’

‘It’s the same fellow. He transferred across a few months back, while you were hiding out in England. He will be told to extend all courtesy to you and provide you with whatever information he’s gleaned.’

‘Courtesy! Sure he’ll have me arrested as soon as he lays eyes on me.’

‘No, he won’t. The Brits are worried about this killing, as am I. It’s in both our interests to get to the bottom of the motive. You can talk with some of our contacts over there – see what they know about this. The Brits can work their end of things. Between you, an answer should be found.’

Liam couldn’t believe what he was hearing. ‘You want me to work with the British police?’

‘I do... And if you tell anyone I said that I’ll put a cap in your head quicker than you can say Hail Mary.’

Collins’s blue eyes were deadly serious. He watched Liam a moment longer then grinned and clapped him on the arm. ‘But it won’t come to that, will it, boy?’ The eyes never lost their seriousness. ‘You can smoke if you like.’

Liam took out his tin of Players. ‘Want one?’

Collins perched himself on the edge of the desk and shook his head. ‘I gave them up a while back. I was relying on them a bit too much, but puff away. I still like the smell.’

Liam did just that as he tried to get his head around what was being asked of him.

Collins took out his pen and began writing on a small piece of paper. ‘I’ll give you a fortnight to sort your affairs, but I want you on the boat over there sharpish. You can tell your replacement that now is the time to prepare… train his men, get more weapons… there may be a truce but the men must remain alert and active. Here’s two names. The first one’s a landlady… she’s a good girl who’s done us much service. The other is head of the IRB in England – you’ll be reporting to him. He’ll put you in touch with Caviston and whoever might be of help from our side.’

Comment by Alan Brown on July 19, 2015 at 11:04pm
Interesting reading. I am the writer/director of the Irish feature film The Cormack Brothers. It is screening this Wednesday 22nd in the Aisling Center in Yonkers from 8pm. Tells the true story of 2 Brithers wrongfully hanged in 1858 Tipperary. Would be good to meet. Regards Alan

Thanks Alan. I'm in Dublin, so when you get back from the States we might be able to arrange something. Best of luck with the screening.

Jakkers, the Big Fella is still creating widespread interest around the world even after all these years. The 1916-2016 celebrations will bring even more interest in the Irish experience, there and around the world.

Thanks Fran. Yep, the centenary is sure revitalise interest, Richard. I just hope the Irish government does it justice.

Money is the lubricating factor in governmental activities, so if they can make a Euro or two on the entire affair we may see "justice" done to recognize Irish Independence. Like "MIck" , with Dev and the governmental group in jail (inactive) we may have to take care of the celebrations; ourselves alone. Slainte!

Haha, you hit the nail on the head there, Richard

Da brought me up that if you want to swing a hammer its better to hit the nail than a finger ;-) ( it also allows me to play the guitar and sing Pub songs without bleeding all over the fret board); which means that most of our political figures must have heavily bandaged fingers as they usually miss the nail.  Wait, I think there could be a new song in that thought,..... where's me guitar???  Slainte!