On October 12, 1867, after picking up cargo from Sheerness and Plymouth harbors, a fully rigged, 875-ton frigate, cast off from her moorings at Portsmouth on the south coast of England. The vessel, bound for Western Australia, her hold full to overflowing with what the British authorities deemed ‘the dregs of society,’ turned southwest and set sail for the other side of the world. The ‘Hougoumount’ (above) was embarking on her final, lucrative voyage as a ‘convict’ ship, chartered to transport 280 prisoners to what would be their final destination, some for long periods of time and some for the rest of their lives, depending on the severity of their crimes. Among the ‘convicts’ on board the ‘Hougoumont’ during that fateful journey were a group of 62 Fenians, all Irish political prisoners. They had been sentenced for taking part in the Fenian Rising of 1867.

The name Fenian comes from the old Gaelic word Fianna, and was first used in 1848 by John O’Mahony, a Celtic scholar living in the United States. He had founded a group of Irish republicans and applied the name Fenian to the group. In ancient Ireland, the Fianna were warrior groups of young men who lived apart from the mainstream and in times of trouble they were called on to fight the enemy. What set this journey apart from the many previous was the unusual fact that many of the men on board were fully literate. The Fenians were a highly educated group of individuals and not the ‘illiterate hooligans’ as portrayed by the British propaganda of the day. 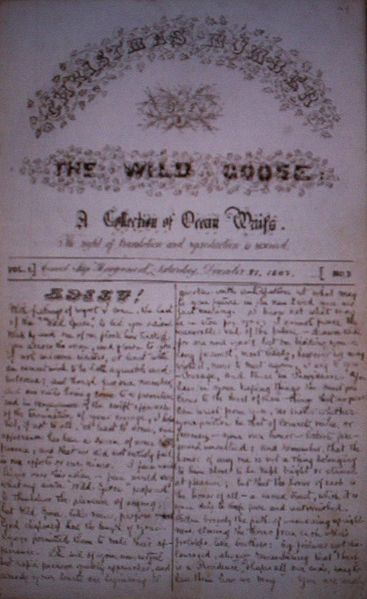 Many journals written by the Fenians during the voyage still exist and seven editions of a newspaper, titled The Wild Goose, can be seen in the State Library of New South Wales. The fact that those men, under abominable conditions and with their futures largely unknown, had the courage and will to write down for posterity, their thoughts and experiences, attests to the indomitable Irish spirit.  One of the convicts, John Boyle O’Reilly, went on to become a noted poet, journalist and author.

John Boyle O’Reilly was born June 28, 1844, at Dowth Castle in County Meath, just before the time of the Great Hunger. His family were fairly wealthy, strongly patriotic and fiercely resented British rule in all its forms. His father was a schoolmaster and his mother was a relative of John Allen, a close friend of Robert Emmet. Allen had played an important role in the Rising of 1803, led by Emmet. In his formative years, O’Reilly received a good early education and at age 13, when his older brother was stricken with tuberculosis, he took over as an apprentice at a local newspaper. When he was 15, he went to live with relatives in Preston, Lancashire, and worked at the newspaper office there. In 1861 he enrolled in the 11th Lancashire Rifle Volunteers and received military training. On his return to Ireland in 1863, he enlisted with the 10th. Hussars in Dublin. Later, in 1865, he joined the secret society the Irish Republican Brotherhood and started to recruit new members from within his regiment. He recruited 80 members in total, all men with military training, who were disciplined and knew how to handle weaponry.

Unfortunately, by late 1865, the Irish Republican Brotherhood (IRB). had become such a large and popular movement that it could no longer evade detection by the British authorities. The government made a number of raids, seized records, and gathered evidence from informers. Many were arrested, including O'Reilly. For his part in the conspiracy, O'Reilly was sentenced to 20 years’ penal servitude. It appears that he was originally sentenced to death, but his sentence was commuted to 20 years. He served nearly two years in English prisons before being put aboard the Hougoumont for transportation to the British colony of Western Australia. 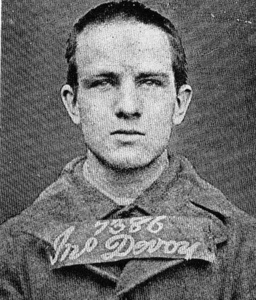 If we pause here and reflect on this man’s life so far, we can clearly see that he was intended to play the role that he eventually played in Irish history. His life could have taken no other path. If we ponder on the place of his birth we see that he was born in an area of Ireland that is directly linked to ancient Ireland in its formative years. Dowth, County Meath, lies in the area of Ireland dubbed 'royal midhe' so named because in ancient times, Midhe was the fifth province. It was given the 'royal' term because the valley known as ‘Bru na Boinne’ holds the ‘Hill of Tara,’ the seat of power of Ireland's ard ri (high kings) and the ancient place where they were crowned. Across the river, high up on the east bank, sits the Neolithic ‘Newgrange’ passage tomb, another sacred site tied forever with Ireland’s history. ‘Bru na Boinne’ is the crucible where many of Ireland’s major historical events were forged, that still impact our lives today.

Knowingly or otherwise, O’Boyle surely would have absorbed and been influenced by the energies emanating from those sacred sites and their histories. This, coupled with his staunchly republican lineage led him, I am sure, on his predestined path.

'Home, friends, all that I loved in the world were there, almost beside me, -- there, ‘under the sun’ and I, for loving them, a hunted, outlawed fugitive, an escaped convict, was sailing away from all I treasured -- perhaps, forever.'

In 1869, O'Reilly escaped from prison on the whaling ship 'Gazelle' and made his way to Boston. Later, in 1871, he would meet with noted Fenian John Devoy and together, with assistance from Clan na Gael, they would plan the successful escape of six remaining Fenian prisoners from Australia's shores.

*This week in June 1876, John Boyle O'Reilly received news of the successful escape of six Fenian prisoners from Australia on board the ship Catalpa. O'Reilly had played a major part in the escape plans. (JAB)

I always enjoy your engaging work!

And I yours Ms. Fullerton.

I love reading about our Irish History --- that fighting spirit, that made Irish people all over the world so proud of their heritage, gives me goosebumps even now when I am reading it.

So many similarities exist between John Boyle OReilly and John Mitchel. Both were sentenced to death for similar sentiments on the excesses of empire on the Irish. Both would have harrowing recollections of the Great Hunger. Both had their sentences commuted to transportation to Western Australia and in Mitchels case, to Van Diemens Land. Both escaped to the USA and both were journalists. 'Jail Journal' by Mitchel with an introduction by Arthur Griffith is a wonderful read about his transportation and after life. The National Museum of Ireland has a similar account of O'Reilly in its excellent "Soldiers and Chiefs" exhibition.

While John Boyle O'Reilly  may have had some family resources affording him an education before heading to England, my great grandfather was born in the same year of 1844. He had a sister and two brothers. It seems they all perished in the 1847 business or the devastating aftermath of disease hunger and pestilence. I believe he was raised by the PLU system although I have found no records in the Poor House for that time. He was the youngest, and I picked him up again in the civil Records Marriages in 1870. No records were kept of inmates of these institutions and the only time surnames or any names were mentioned was when a child was bold, needing chastisement and the punishment allotted. A million died and no records worth talking about regarding surnames. Like the ordinary soldier's anonymity except for death records, except when they were rarely mentioned 'in dispatches' Men of this calibre would be considered very dangerous characters today.

So its easy to understand what made men like Mitchel and O'Reilly tick.

Wonderful article -  O Reilly was a great friend of P S Gilmore the Bandleader the most publicised Irishman of 19th Century America, for whom he wrote a poem entitled "Exile of Erin" which was scheduled to be performed at the World Peace Jubilee in 1872 . But at a function prior to the great event in Faneuil Hall in Boston attended by all dignitaries of the City and State , including members of the press. When they all arrived at Faneuil Hall there were ceremonial greetings such as the Royal Grenadiers Band's arrival at the Albany Railroad. From there they marched behind the First Regiment Massachusetts Infantry and Gilmore's Band to Boston Common. Members of the Press were assembled in Faneuil Hall from all parts of the country as well as the elected Members of the City Hall led by the Mayor who welcomed all to the city for the event. Acknowledgment was given to what the Jubilee had already taught the world in terms of Peace and goodwill amongst all men. John Boyle O Reilly, poet, Fenian and editor of the Boston Pilot said in his speech that that the Jubilee was an example of “what Irishmen can do – Mr Gilmore and myself, for instance”.

Thanks Michael. Same to you.