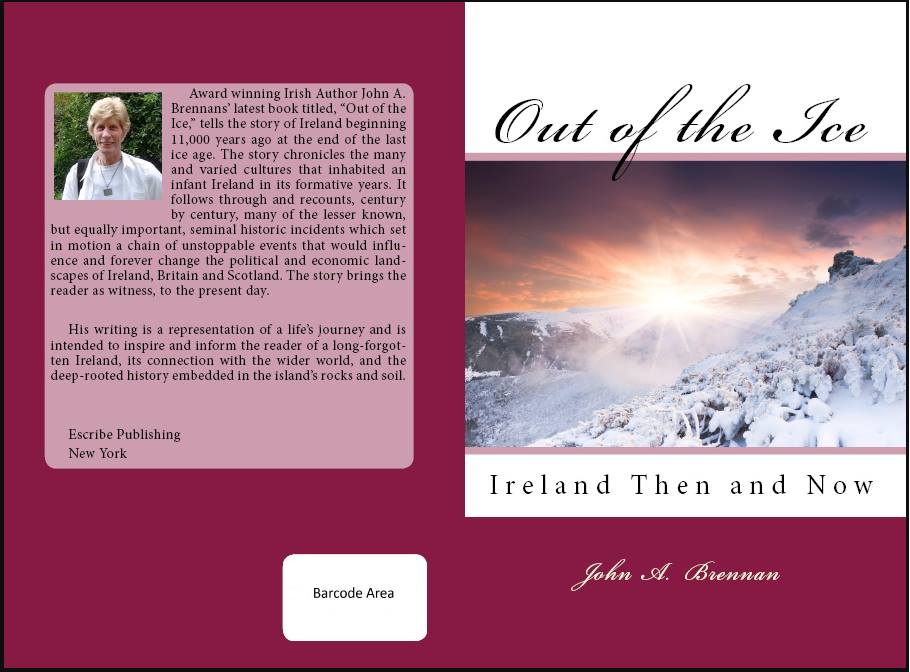 Delighted to learn that my book “Out of the Ice: Ireland Then and Now” has been chosen as an "Award Winning Finalist in the History category of the 2018 International Book Awards."
Escribe Publishing Inc.
New York
ISBN: 978-1548558246
http://www.internationalbookawards.com/
Finalist
History: General
https://www.amazon.com/author/johnabrennan

Irish author and poet John Anthony Brennan has previously written a book of poetry and a philosophical memoir; but his latest production, Out of the Ice: Ireland Then and Now, represents yet another genre: a history of Ireland that begins in the Ice Age and moves to modern times. One would anticipate that such a survey by an author who has written in other genres might be less authoritative than those produced by a dedicated historian; but the fact is that Out of the Ice offers a different flavor and atmosphere as it details the different cultures that influenced Ireland's development.

First, there's the figure of Cessair, whose early landing in Ireland made her the first major figure to arrive in that country: "According to many of the old writings, the first individually named human to make an impact in Ireland was Cessair, a daughter of the biblical Noahs' son Bith and his wife Birren, who were denied a place on the Ark. Cessair, together with three men and fifty women, set sail on their own. In some versions of the tale, Noah tells them to go to the western edge of the world to escape the oncoming Flood. In other versions, when their people are denied a place on Noah's Ark, Cessair tells them to make an idol to advise them. This idol tells them to escape the Flood by sailing to Ireland. They set out in three ships and reach Ireland after a long, seven year journey."

Various groups arrived and proceeded to leave their footprints on Ireland (the Fomorians, a seafaring pirate group; the Partholonians, a group led by the son of the King of Greece which introduced farming, cooking, brewing and stone-buildings to the island; and a 'supernatural' race, the Tuatha De Danann, charged with "removing the evil Fomorians" who also introduced the storytelling tradition to the nation); all before the Celts (which is where too many histories of the country begin).

John A. Brennan's attention to historic detail and his references to the ancient writings supporting this history lend to a seasoned, logical progression of events that does more than document dates and peoples, but charts what each group brought to the country to help build the Irish culture we know today. This approach offers far more insights than the traditional historical focus on events, delving into the influences and ideas behind the modern Irish psyche.

The story In Chapter three titled “Regicide and New Beginnings” tells of a seminal event, involving three kings and several chieftains and nobles that took place in Ireland during the latter half of the first century A.D., and which set in motion a chain of events that would influence and forever change the political and economic landscapes of Ireland, Britain and Scotland.

Chapter Four, “New World Order” brings us to the fifth century and gives the reader insights into the lesser known story of the roles played by the Pagan high king Laoghaire and his high Druid Lochra and their battles with the Roman known as Patricius and his message of Christianity.

In Chapter five the story titled “The Destruction of Royal Brega” chronicles the account of the first known group of foreigners to launch highly organized, violent raids in Ireland. Most people believe it was the Vikings, who raided Lambay Island in 795 AD. What many people are not aware of is that a century before the emergence of the Vikings, another equally violent group, not from the Fjords of Norway, but from a place much closer to home, beat them to it.

Chapters continue with this foundation of tracing different peoples and what they introduced to Ireland, from the Normans and the invasion armies that "overwhelmed the Viking established towns of Wexford, Waterford and Dublin in 1169-1170" to the Scottish Gallowglass: "The Gallowglass," as they were called, were elite mercenary warriors and members of the Gaelic clans of Scotland. As Gaels, they shared a common background and language with the Irish, but as they had intermarried with the Vikings, the Irish Gaels nicknamed them "Gall Gaeil" meaning foreign Gaels. Large numbers of gallowglass settled in Ireland after losing their land and property during the Scottish Independence wars."

From political and social struggles to individuals and groups who left specific marks on the country's history and peoples, Out of the Ice offers a special approach that few other Irish histories can match, eschewing the dryness of academia in favor of a research-supported but lively pursuit of what makes the Irish who they are today.

With its focus on lesser-known historic events through the centuries, Out of the Ice creates an evolutionary process that is highly recommended for any reader of Irish history who may have pursued other books on the subject, but who here will receive a more thought-provoking blend of facts and cultural insights.

Out of the Ice: Ireland Then and Now

Read a Review in:

My, Mr. Brennan, you're impressive! Looking forward to reading this book!

Thank you as always Claire. If you do get a chance to read it I would value your opinion.

I most definitely will!

It's a recommended read.  There are some surprises between the covers. Everyone who calls themselves Irish should at least have a read or indeed, own a copy.

Thank you Patrick. I'm glad you enjoyed it.