St. Colmcille, also known as St. Columba, was born on this day Dec. 7 in 521 AD in Gartan, modern day County Donegal, Ireland. He is known among other things, as the Patron Saint of the city of Derry and benefactor and supporter of Poets.

On a frigid, mist shrouded morning in 563 AD a battered, wave tossed Curragh (boat) came to rest on the rocky shore of the island of Iona (Isle of Hermits,) just below the ruins of an old, iron age fort. The tattered leather sail and thin wicker sides, covered in cracked and split cow hides, attested to the dangers encountered by anyone brave or desperate enough to challenge the open ocean. But on that day, the soaked, shivering crew of thirteen men had little choice as their lives were at stake. Expelled from their homeland of Ireland in the wake of a violent war which claimed more than three thousand lives, they had to flee under threat of death, never to live again in the land of their birth. Their meager possessions, prized books and writing materials, a few saintly relics and a gold altar cross, had thankfully survived the treacherous journey. Ironically, the cause of their exile was an argument over a single book. 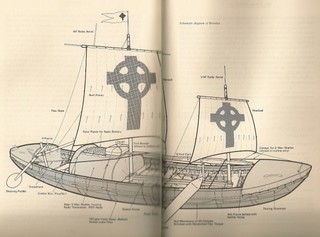 Two centuries earlier, in 347 AD, a man whose writings would change the Christian world, was born at a place called Stridon, a small village that straddled the border of Dalmatia, in north-eastern Italy. The son of Eusebius the bishop of Caesarea, Jerome was an historian, theologian and like his father before him, a translator. His translations of the original Hebrew biblical writings into Latin, became known as ‘Jerome’s Vulgate,’ a comprehensive work and the earliest version of our modern day bible. ‘Jerome’s Vulgate’ would go on to have a profound and long lasting effect on Irish Christianity and forever change the lives of all involved.

In 495 AD a scholar monk and scribe named Finnian, sometimes referred to as ‘Finbarr the white head,’ (a reference to the color of his hair,) was born in the north-east of Ireland in the province of Ulster. He founded a monastic settlement overlooking Strangford Lough, in an area that today we know as County Down. Attached to the monastery was a school and scriptorium, which became a renowned center of scholarship, learning and translation. Movilla Abbey, (monastery of the plain of the notable tree,) taught all subjects including mathematics, geography, history, language and would later use ‘Jerome’s Vulgate’ as the benchmark for all religious studies. The Abbey, built on the site of an earlier pre-Christian, Druidic place of learning, it may have taken its name from a local forested area covered with large trees, which were sacred to the ancients. Traveler monks and scribes regularly left the monastery and scoured the then known world, seeking knowledge and inspiration. On their return, perhaps years later, they passed on to their fellow scribes, all materials that they had garnered, most of which was written in the language of its country of origin, notably Greek, and Hebrew. Undaunted, and with their otherworldly abilities, the scribes painstakingly pored over the ancient writings and converted them to the Latin and Gaelic languages. Eager pupils from all over Ireland came to Movilla to study and learn the craft of translating and illuminating manuscripts. One of the pupils who enrolled in the school was a scholar named Colmcille, also known as Columba, who was described as “a striking figure of great stature and powerful build, with a loud, melodious voice which could be heard from one hilltop to another.”

Colmcille was born in 521 AD in Gartan, modern day County Donegal, Ireland. He was the great-great grandson of Niall of the Nine Hostages, an Irish high king who reigned in the 5th century. As a teenager he enrolled in the school at Movilla, and studied under the abbot Finnian. By the age of twenty-one he was already a deacon and with his studies completed, he travelled south to Leinster and enrolled as a pupil of an old bard named Gemman. His studies with Gemman complete, he then entered the monastery of Clonard, situated on the River Boyne in modern day County Meath. During that period, many of the important names in the history of Irish Christianity studied there, the average number of scholars sometimes exceeding three thousand. Another of Colmcille’s teachers was the esteemed scholar monk, Mobhi, whose monastery at Glasnevin taught such famous men as Ciaran, Canice and Comgall, many of whom would later become known as the Apostles of Ireland. 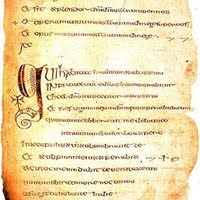 In 540 AD, on his return to Ireland from a trip to Rome, Finnian had in his possession a copy of the book, ‘Jerome’s Vulgate.’ Knowing that he had in his hands, a vitally important work, his intention was to translate, transcribe it into the Gaelic language, and distribute among the many monasteries and schools. Unbeknownst to Finnian, Colmcille, his brightest pupil, had borrowed the book without his knowledge and did his own translation, with the same intentions as Finnian. Finnian, enraged, demanded Colmcille return the copy, but was met with an unwavering refusal. This incident sparked the confrontation that became known as the Battle of Cúl Dreimhne (Battle of the Book,) which took place at Cairbre Drom Cliabh (County Sligo,) in 561 AD.

"To every cow belongs her calf, therefore to every book belongs its copy." King Diarmait mac Cerbaill.

That quote, in essence, conveyed the king’s decision regarding what was essentially the first copyright case ever brought before an Irish court and perhaps the world. Finnian, whose loyalty and fealty was to king Diarmait, petitioned him to intervene in the dispute. A hearing was duly convened and lawyers for both parties argued their client’s respective cases. Finnian’s side argued that as he owned the original manuscript of ‘Jerome’s Vulgate,’ he also owned the copy. Colmcille’s lawyers, while agreeing to Finnian’s ownership of the original, disagreed with the king’s decision regarding the copy, and argued that as Colmcille did all the work of translating and transcribing, the copy should be his. Nonetheless, the king’s word was final and the matter appeared to be settled. But this was not the first time the king had incurred Colmcille’s ire and for him, it was the final insult. Soon after, he set out to avenge the wrongful decisions. The first event that had so incensed Colmcille, occurred earlier, probably in 560 AD, when Curnan of Conn Acht, a relative of Colmcille, fatally injured a member of an opposing team during a hurling match. Fearing for his life he sought, and was granted refuge with Colmcille, invoking the age old ‘Law of Sanctuary.’ King Diarmait sent several of his heavily armed men to arrest Curnan and after a violent struggle, dragged him from Colmcille’s arms and killed him. It was the final straw when the court ruled against Colmcille and declared ownership of both the original and the copy of ‘Jerome’s Vulgate,’ to Finnian. An enraged Colmcille was driven to enlist the aid of the O’Neill clan and urge them to rise up and do battle with King Diarmait.

Early one fateful morning in 561 AD on a verdant, open plain, at Drumcliff, in what is now County Sligo, both armies assembled, faced each other across the wide expanse, and prepared to go to war. Nothing could stop it, not even the intervention of respected Filid with their words of appeasement. The die was cast, and now blood would stain the furrows and bracken as far as the horizon. At days’ end, almost three thousand men lay dead and dying in mortal agony, their death throes, haunting, pitiful screams, resounded on the soft evening air and could be heard for miles around. The blood soaked shields and broken claidebs (swords) lay scattered all around, some still clasped tightly in the hands of the butchered, broken bodies of the vanquished. That night, a pall of deathly silence enveloped the sorrowful plain, and nothing stirred for days.

Later, when the horror had subsided and sanity returned, a Synod of clerics and scholars was convened. Some of those who attended the Synod blamed Colmcille solely for the deaths and called for his execution, some favored excommunication, but when Brendan of Birr, a noted theologian, spoke on his behalf, a deal was made that allowed for the option of exile instead. Colmcille's conscience troubled him so badly he sought the advice of an elderly Hermit named Molaise. After much careful consideration, Molaise advised Colmcille to do his penance and accept the offer of exile. Colmcille duly left Ireland, and returned only once, many years later. Finnian’s monastery went on to become a very successful seat of learning and scholars, having heard of his teachings and sanctity, flocked to his monastic retreat. The traditions taught at Movilla were based on the scriptures contained in ’Jerome’s Vulgate,’ but also used the practices of the Desert monks of Egypt.

Colmcille founded an important abbey on Iona, which became a dominant religious and political institution in the region for centuries. He was highly regarded by both the Gaels of Dál Riata and the Picts, and is remembered today as a Christian saint and one of the Twelve Apostles of Ireland. Although in exile, he remained active in Irish politics, though he spent most of the remainder of his life in Scotland. What remains of his copy of ‘Jerome’s Vulgate,’ is housed in the Royal Irish Academy in Dublin.

Information verified by Geoffrey Keating’s “History of Ireland” and Michael O’Cleary’s writings in the “Annals of the Four Masters.”

A special thanks for the invaluable information provided by Wikimedia.

Wonderful article as per usual.. JAB... Heard you were doing a presentation at The Irish Society ..

Would love to be in the audience Saint Ciarán of Saighir , was originally to be one of the Twelve Apostles of Ireland .. however it appears that  Finnian of Clanard was substituted.. ..  These eleven men studied under Finnian  and were  known by old Irish writers, ..as the original Twelve  … Can’t seem to find out why !!!

Thanks Mary. Wikipedia has a good article about the Apostles of Ireland.