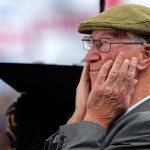 Wayne Rooney is tiny. Really tiny. I stood less than ten feet away from him on Sunday, on the pitch in the Aviva, and I reckoned I was taller than him. When I got home I checked and so I am. But then I reckoned I was taller than most of the Irish and English football players as the two teams lined up before the momentous replay of the friendly match twenty years ago. The original match that was stopped short with rioting.

Jack Charlton (pictured above), on the other hand, is very tall. He was also very emotional. A little skinny, he has not been well recently apparently. His grin was ear to ear. The crowd, all of the crowd, gave him a standing ovation. He was moved to tears. We clapped hard. The crowd cheered. It was an electric beginning.

The grass was wet with sprinklers. We had to duck these earlier. The paint was wet on the grass too. We had to avoid the lines. Do not step on the lines. We had to line up behind the team, smaller than expected up close, and never lose our concentration.

We had practised our unflappable faces. We were to be unstoppable. Regardless of the reaction from the crowd we were to remain fixated on our musical director.

The President, who is, to be fair, football sized, met the teams.  We got into position.

Then, we heard our introduction. We closed our ears to everyone else, looked nowhere else. Took the huge intake of air with which to sing. And sang.

It was the fastest two minutes of my life.  I don’t recall anything going so fast – it was like the final rattle of an examination with the clock racing around to the end point. We were so focused we did not have time to think.

The sound engineers set our volume to high, to stun. And we sung to stun. The BBC said that both anthems were immaculately observed before kickoff. I think there may have been some additional hubris but it counted for very little. The Irish Times said we were set to Spinal Tap 11 stun.

And then it was over. With the blood still ringing in our ears we stopped. Jack Charlton was not the only emotional person on the pitch. We paused. We didn’t want to leave the pitch and then piecemeal we turned and left the ground. We were like survivors, shell shocked and dazed. As we entered the tunnel to leave, the crowds clapped us again, some standing to show their appreciation.

And with our hearts beating, our eyes bright and our cheeks reddened we left the arena. It was without any doubt the most exciting part of the entire day.

Clearly a transcendent moment, these anthems, but what was the score of the match?

How exciting for you to be at a match where you could look on in awe at these know ' Celebs' for want of a better word ! We as a family were sitting outside the stadium listening to the roars of the people. My husband being English And I being Irish were cheering on both sides .