This farthing coin was recently sold on eBay for $102.50. When it was minted in 1842, as a trading token by James O'Flynn it was worth only a quarter of one penny. James O'Flyn(n) was listed under 'Linen and Woollen Drapers and Haberdashers' in the 1846 Slaters Directory for Loughrea, County Galway, my home town. The shop was on Main Street, long gone now, and I don't know where exactly it was, nor how long he was in business. I do know however that James O'Flynn was ahead of his time!

This tiny coin, (just 22mm diameter), made of brass or copper, minted possibly in Galway,  would have been used as payment or exchange for goods in James O'Flynn's business, and very likely, accepted as fair currency in most shops around the town of Loughrea, though probably not anywhere else.

Farthings were legal currency, the smallest denomination coin in circulation, a quarter of a penny. Ireland had had it's own currency and coinage issued by our parliament since 1620, but following the Act of Union in 1801, our Irish coinage was abolished and replaced by standard British coins, which from 1822 were minted in Dublin. They were the exact same as the English ones, with the king or queen on one side, Britannica on the other. A fine idea I am sure, but by 1842, there was a distinct a shortage of coins in circulation around Ireland.

Ireland had a population of 8 million people in 1842, most of whom were extraordinarily poor. Most of them never had much money, but when they did, they mostly used pennies, ha'pennies and farthings, rather than the bigger coins, shillings, florins, crowns and guineas, because they were mainly very poor and money was so rare. If you had a shilling back then (12 pennies) it was the equivalent of perhaps €150 or $200 nowadays. Whatever coins were in circulation were in peoples pockets or under the mattress. Few were in the banks, and eitherway, almost no tenant farmer or labourer had a bank account and nobody had a check-book! Cash was king, if you had it!

There were no 'Notes'. Our ancestors never saw a Pound note or a Fiver or a Tenner! They did not exist. People who had a lot of money, landlords, gentry and merchants, usually used Bank Notes, issued by an individual private bank, to 'pay the bearer', goods or services to the value of that particular note. Ordinary people used coins. You used a poke, or a bag in your pocket to hold the coins. By the way, 'poca' is Irish/gaelic for pocket, thus the word 'poke' became common in America amongst the 49-ers in the gold rush in California. You kept your grub-stake or your gold-dust in a poke and hope it would not be stolen!

Because ordinary folks used only smaller coins, those coins could be in short supply, especially the farthing, which was the 'de facto' basic unit of currency...no not the penny, you see, a penny was worth quite a lot! This shortage of coins was especially bad seasonally, ie. between harvests or fairs, in rural towns. Without currency in circulation, commerce would grind to a halt, the economy of small towns would falter.

If only we could print our own money eh? Well O'Flynn, and many other shop-keepers around Ireland solved this 'money shortage' by 'minting' their own farthings, basically printing their own money, money that was backed by the value of the goods on their shop-shelves. They didn't mint the bigger coins, just the smallest ones, the farthing or the ha'penny. This token, conspicuously did not ape the real coin, therefore it was not a counterfeit copy, no merely it was just that a token, (or a 'loyalty coin') which token could be exchanged as payment for goods in O'Flynns.Yes it had a nationalist slant with its beautiful shamrock wreath, but nationhood back in 1842 was just a far-off dream.

These new coins were vital for the farmers who supplied O'Flynns with wool, or whose family, say, worked at home, weaving or wool-carding for O'Flynns and other shops in town.

Back then shops like O'Flynns Drapery didn't sell ready-to-wear clothes. They sold fabric, for suits, for shirts, for sheets and mattress covers, etc. Most people only wore locally tailored clothes, made to order for you by the travelling tailor, or the town tailor. Tailors didn't sell cloth either, so you had to buy the cloth/fabric for your suit or dress from a shop like O'Flynns. In all likelihood, you had no cash, so you bought 'shop goods' on 'tick, or on credit.

For instance, if you were getting married, you might need a new suit. You went to O'Flynns for the linen to make two shirts, and serge cloth enough for a suit jacket and trousers, for which O'Flynn charged you say five shillings and sixpence, ( 5/6 ) for, and that debt was written up in their big 'Debtors Ledger. Later on, after you'd sheared your sheep, you might sell O'Flynn a 'bale' of wool, from your shearing. It would be weighed, and your account credited with say, six shillings and seven pence ( 6/7 ). The shop now owed you one shilling and one penny, ( 1/1 )and depending on what coins were available, they might give you a one shilling coin and four O'Flynn's 'farthing' tokens. Now you could go pay off other bills around town, for seed potatoes, corn meal, tea, sugar, whatever, and if you had some small change left, it was as likely to be O'Flynn coins as the queen's legal tender.

O'Flynns tokens would be accepted in the Loughrea pubs and shops, and in time would be accepted back by O'Flynn for more goods. Because of these intermittent shortages of legal coins, the local authorities turned a blind eye to the practice and allowed businesses like O'Flynns to issue their own farthing coins advertising their own businesses. However, After the famine, after the population of Ireland had halved, say by 1865, there was plenty of legal coins in circulation so O'Flynn would have melted down his coins and sold the brass or copper as scrap metal, rather than be accused of 'forging coins of the realm, a very serious crime indeed.

Somehow, this particular token got away and survived for the past 163 years, and brought its story with it! Fascinating eh! (I know, and long winded too...I just couldn't resist telling this story!). Just think of the tokens that our EU masters will issue next month when they print €billions of new currency, so that demand is encouraged in Europe, and deflation does not kill economic growth.

Now I wonder where they got that mad idea from? O'Flynns of Loughrea ... way ahead of their time, eh!

Here is the original eBay listing. 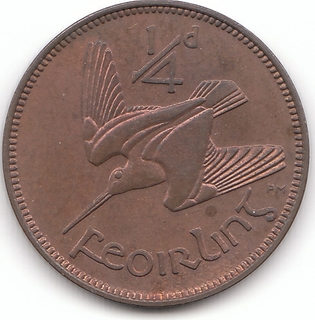 Thanks for reading, I do hope you enjoyed it. There are not too many of us that remember the farthing, let alone spent one. The Irish farthing ceased to be legal tender in 1969, but to be fair, you couldn't ever buy anything much with it. 4 of 'em would just about buy you a penny bar!

Called a 'feoirling' in Irish, I remember the Irish farthing had a bird on it, I always assumed it was a snipe, but it turned out to be a woodcock, which bird, ironically, I've never seen in the flesh, only on the coin!

Join Brian Nolan for an engaging and witty walk around Galway city www.galwaywalks.com ;

As children ; we were given all teh farthings to play with ; wish we had them now.