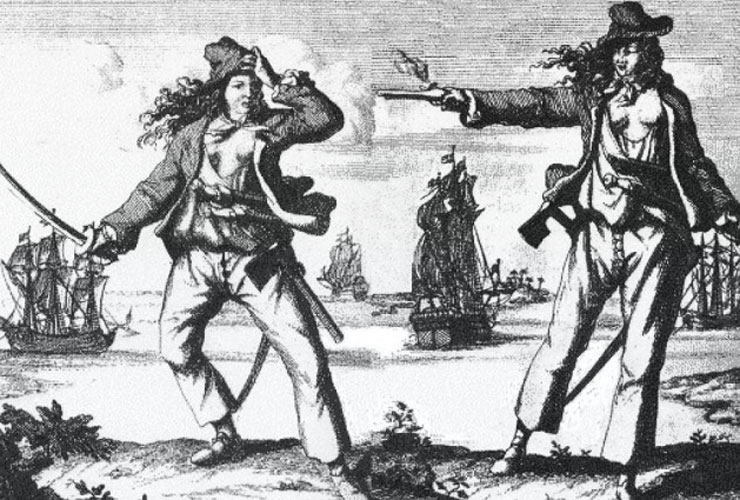 In the early 14th century, the Clan O’Malley, a great seafaring family, rose to power in Mayo. They ruled the southern shore of Clew Bay and most of the barony of Murrisk for over 300 years. They were ruthless pirates and terrorised the ships to and from Galway town, taxing all those who fished off their coasts. They traded with some coastal areas of France and Spain and built a row of castles facing the sea to protect their territory.

Their coat of arm bore the Latin Motto “Terra Marique Putens” (Valiant by sea and land).

The most famous O’Malley was Grainne or Grace O’Malley. She was born around 1530 at Belcare Castle near Westport . She was the only daughter of Eoghan Dubhdara (Black Oak) O’Malley and Margaret or Maeve Ní Mháille. She is commonly known by her Irish nickname Granuaile, or Gráinne ni Mhaille, a name reputed to come from the Irish for bald (Mhaol). According to legend, Grannie, as a young girl, wanted to join her father on the sea and travel with him to Spain. Her mother disagreed, saying she was a girl and not a sailor. Grainne shaved off her hair to disguise herself as a boy. Her father gave in, and so Grainne got on board and became Grainne Mhaol.

As a child, she lived at her family’s castles of Belclare Castle and Clare Island. She was educated, and it is said she spoke Latin.

Granuaile was born to be a galley captain, sea trader, sea raider, virago, diplomat and a great leader. She had a force of character that comes only once in a century.

When her father died, Granule inherited his large shipping and ‘trading business’ and became Queen of Umaill, chieftain of the Ó Máille clan.

In 1546, Grainne, who was then 15 years old, married Donal O'Flaherty, son of the Clan O’Flaherty chieftain in Connemara and ally of the O’Malleys. They lived at Bunowen castle on the coast near Ballyconneely, County Galway. In his company, she learned and polished the art of boarding ships. She bore him three children: Owen (Eoghan), Margaret (Méadhbh) and Murrough (Murchadh). When her husband was killed fighting ashore, Granuaile, aged 23, took over his castle and fighting ships. Then she returned to Mayo with many followers.

In 1566, she married politically again, this time to Richard Iron Dick of the Burke or Lower MacWilliam family, another land fighter. According to tradition, the couple married under early Irish law 'for one year certain.’ With this marriage Granuaile gained control of Rockfleet, near Newport.  She divorced him after one year, calling out a window to Iron Dick: "Richard Burke, I dismiss you,” but in English documents they remained married.

She was able to manage to keep his castle and remained an ally of Iron Dick.

Many stories grew up around her.

She gave birth to her son Tiobóid at sea, and within an hour, when her galley was boarded by Algerian pirates, she, wrapped in a blanket, appeared on deck leading her ships into battle, and so her crew, rallied again, captured the pirate vessel.

She had control of several castles, including Rockfleet in Clew Bay, Doona on Blacksod, Kildavnet on Achill Island, and the O’Malley Castle on Clare Island.

It was there Granuaile lived in summer. Clare Island was her stronghold, a place she loved so much and, above all, strategically placed at the centre of her sea kingdom. It is said she used to tie the mooring ropes of her galley to her bed through her bedroom window, ready to board quickly.

From Knockmore, she could send or receive messages and repeat them on other towers on Inishturk, Achill or Doona, using smoke columns or flags of different colours.

In 1580, after 15 years of battles and negotiations, Iron Dick Burke, Granuaile’s husband, was granted a knighthood by the English governor of Connacht, Sir Nicholas Malby. He was also given the highest title in Connacht, the McWilliam title. When the two men died, the new governor, Sir Richard Bingham, and his men again persecuted Granuaile and her followers. She made a historic journey sailing up the Thames wishing an audience with Queen Elizabeth I. It is said, when they met at Greenwich Palace, Granuaile refused to bow before Queen Elizabeth because she was herself a Queen, and not a subject of the Queen of England. The two women spoke in Latin and came to an agreement. Queen Elisabeth I released her sons Tibbot Burke and Murrough O'Flaherty, and her half-brother, Dónal na Píopa, while Granuaile put an end to piracy against England.

Despite her life full of adventures, Granuaile lived to an old age. She died in 1603 at Rockfleet Castle and was buried in the Cistercian Abbey on Clare Island.

After her death, she became an Irish folk hero of almost legendary status.

Well done  Grainne or Grace O’Malley,,, it is about time that our leading Ladies of Ireland were brought out of the Cupboard,  .. We women an multitaskers  Thank you Brian Hogan

What a character Grace must have been! This would make a fantastic movie or play with the right cast. Great re-telling Brian!

Dia  Gwit Brian,  Thank you for a delightful blog.  Grace O'Malley has always been of particular interest to me.  You have very succinctly presented her to all who read this.  A delightful tale - again thank you!