In rural Ireland, the Christmas shopping started on December 8, the Feast of the Immaculate Conception. On that date, shops would decorate their windows with Christmas decorations and Christmas fare. I remember when I was young, a Cadbury's merchandiser would organise our Christmas display window. There was such a sense of wonder for us youngsters to view the chocolate boxes with their alpine scenes or other landscapes adorning the larger chocolate boxes. People would come from near and far to view the extensive display of Christmas goodies.

On that day, also, people would visit Dublin, Galway or other larger population centres for their annual Christmas shopping outing. Back in the 1960s, after the emigration of the '50s there was a large trade in tins of Kimberley, Mikado and Coconut Creams, which were posted to relatives in the United Kingdom or America. These varieties of biscuits were not then available in the U.K and had a nostalgic value for relatives abroad. A special parcel office was opened in towns like Castlebar by An Post for the posting of parcels. In Castlebar this office was situated on The Mall, in the premises now occupied by Castlebar Boxing Club. All parcels had to have a customs declaration form and had to be sealed with a red wax. Free-range turkeys and home-cooked hams were also popular with our emigrants.

Our cities, large towns and villages would have street lights put up for the festive season and a special ceremony would be held to turn on the lights on December 8th, often accompanied by carol singers. 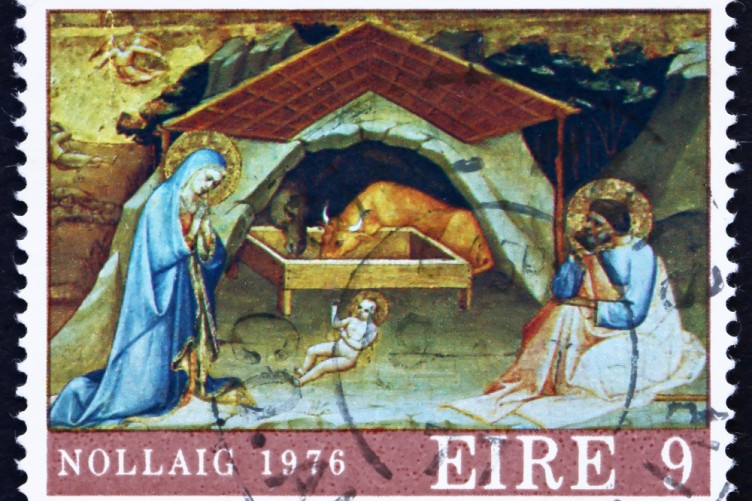 The sending of Christmas cards in paper format is hugely popular in Ireland. It isn't the oldest of Irish Christmas traditions, by any means, but there's an element to it — the inclusion of a long newsy letter, often with some recent photos — that I imagine is a throwback to the days of mass-emigration from the island. Back then, a letter from a long-separated family member would have been the season's best present. A card, possibly bearing some essence of the foreign land from which it was sent, would have added an exotic touch.

The card would be placed on public display while the letter would be stored safely but readily available for regular re-readings.

Today, Irish Christmas cards are big business, with cards exchanged between work colleagues, neighbours and friends, as well as family members near and far. And, in my experience, at least, the Christmas letter is still well-practised in Ireland. This practice is being replaced nowadays by more modern means of communication, such as Internet, e-mail and Skype.

The last Saturday prior to Christmas was known as Margadh Mór. This was the day the rural folk would come to town to buy their turkeys, hams, brussel sprouts and other perishable goods to get them over the Christmas festivities. All the shops would give a present (Christmas Box) or calendar to their customers in appreciation for their patronage.

In more recent times, Christmas has been getting more and more commercialised and seems to get underway in mid-October (or even earlier), when decorations, cards, food fancies and festive gifts begin to appear in shops and on TV.

While many complain about this long build-up and the over-commercialisation of what was purely a religious festival, the holiday season doesn't really begin in earnest until Christmas Eve: 24th December.

W.B Yeats once wrote, “All is changed, changed utterly - a terrible beauty is born.”

This could easily have been written in relation to the Christmas period. Maybe it is time to return to the more traditional Irish Christmas with a caring and sharing mentality among our peoples, rather than the greed and commercialism experiences in recent times.

Hello Brian, I remember well all of those days, Going into Dublin with the kids and seeing all of the Farming Folk , It was a very special time in my life . I had all my loved ones on this earth, and life was good, Sadly this time of happiness does not last [for me anyway] and illness and death and emigration took its toll,

Those memories however have stayed with me ; to carry me through ,, Happy Christmas.