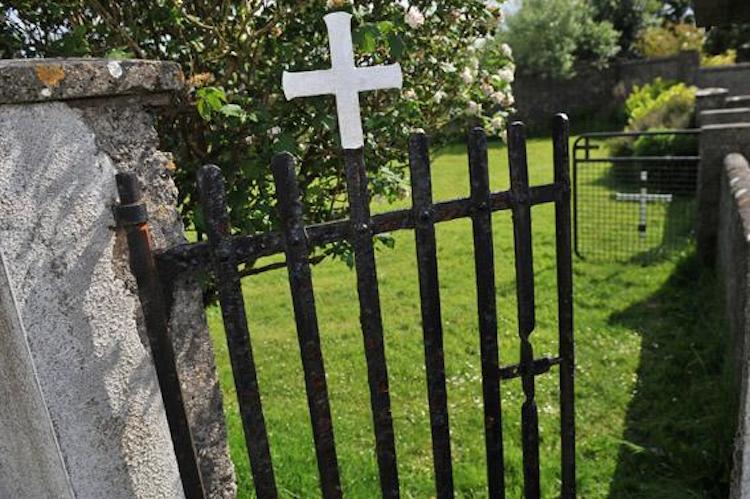 Irish Central: "Mass Grave of Up to 800 Dead Babies Exposed in County Galway"


After reading these headlines, one would be excused for thinking that an object that was clearly a tank for human excrement had been recently opened, and the bodies of 800 skeletons had been exhumed.  That is exactly what is said above, isn’t it?  Except that isn’t what happened at all.

Tuam Mother and Baby Home: The Trouble With the Septic Tank Story

The article above, from today’s Irish Times paints a very different picture.  The recent interest is not stemming from any new discovery.  The story is that the bones were seen by local boys in the 1970s in some kind of concrete enclosure.  One of those boys (now a man, still living in the area) says there might have been around 20 skeletons. A local historian has collected death certificates for 796 children who died in the home over a period of 36 years.  The resting place of their bodies, at this time, IS NOT KNOWN.  No excavation of the property has been done.  At this point, no 800 skeletons have been found.

The Times article raises more questions than answers.  Where are these children buried?  Why was no investigation conducted in the 1970s when bones were seen?  Was the crypt a septic tank, a water tank (as it was called in earlier stories), or something else?  Were these children given proper care when they were alive?  Then there are the philosophical questions: What is the relationship between the treatment of a body and the respect for a person?  How should we tread on land which is known to contain graves, and does this change with the passage of time?  Does engraving their names on a plaque right any of the wrongs suffered by the deceased, or does it serve another purpose: to remind us of the significance of every human life?

It’s important to note that the deaths of 796 children are not in doubt.  It is also clear that Catholic institutions like this one buried people in ways that were disrespectful and an affront to their own theological dictates.  After all, much larger mass graves than this one are found throughout the island, including 11,000 bodies found interred outside Miltown cemetery in Belfast.  The underlying view that certain human beings do not deserve life and dignity is intolerable, and the people who ran these institutions have plenty of questions to answer.  The people responsible for grossly misrepresenting these facts do as well.  Indignance is no substitute for accuracy.  As the facts continue to come out, they may be every bit as salacious as the rumours.  If they are less so, the inflated tales will only cloud the issue.  The truth, reported as it is verified, would honour the departed most.

Those of you who have followed this story, may have noticed its absence, until now, from this website.   A sense of caution unfamiliar in media circles prevailed as the dust settled around the shocking early reports.  At this point I feel obliged to disclose that my husband, Ryan, is an administrator on the site.  That makes me undeniably biased, but I hope my observations are still valid.

I appreciate that TheWildGeese.com is not interested in becoming just one more Irish tabloid.  As a reader, I am not interested in websites that run prematurely with half-baked stories and throw up headlines about Hollywood celebrities anytime there is the slightest hint of Irish connection.  Sites like that will continue to prosper, because the appetite for sensationalist voyeurism is wide, but it is also shallow.  I appreciate your desire to create something deeper; a community of people with interest in the history and culture of Ireland.  This includes debates on the issues of the moment, but also the themes of the age; the later giving the former context, nuance, and sanity.  To the Wild Geese community, I say, the broader, more balanced view you take does not go unnoticed.

This will likely not be the last article posted on the Wild Geese on this topic, and some may take a different view than mine on the way it should be reported here.  The Wild Geese will welcome those views as well, and that openness is another reason I will continue to be an avid reader.

You're missing the whole point of this opinion piece, Robbie.  Journalists (and others) have taken bits of information that have not been verified and have run with them.  That's not right.  It's now come to light that much of this story is, thus far, based on pure speculation.  Leave that to the tabloids.

By the way, I'm not a Catholic, so I'm not saying any of this to defend the Catholic Church.  They certainly have enough to answer for ... and they almost certainly have something to answer for here.  I'm simply a fan of people telling the truth and using facts on ALL sides, and that includes the media.

I understand the anger, and I'm no Catholic apologist.  I just think it's dangerous to wink at sensationalism and bad reporting so long as it only defames people who we think "deserve it."  That's one of those philosophies that comes back to bite its professor.

Comment by Robbie Doyle on June 8, 2014 at 12:32pm
There IS a large concrete tank used in Victorian times as a waste water treatment system. There WERE 796 child deaths at this Catholic-run residence for unmarried mothers and their children. Two anomalies HAVE been found in the soil adjacent to the concrete structure by engineers/archeologists. Two senior detectives HAVE now been assigned to the case to investigate the matter. All these facts are not a huge leap from the story you are ridiculing. Let's wait a week or so before seeing what is sensationalist and want is journalism. The "deserve it" comment is insulting to me. I never used such words.

"Let's wait a week or so before seeing what is sensationalist and want is journalism."

Don't you see, Robbie, that what you've just said there is exactly what this article is saying?  Instead of jumping on this without all the facts like they did (lest they be "scooped"), they should have waited a week or so to let all the facts come out.  As it stands, if they were wrong about anything they reported, they look like unprofessional imbeciles.  At least they would if journalistic integrity still meant anything.  We're used to this nonsense now and put up with it.

Oh, and Kelly's "deserve it" comment ... what makes you think she was directing that at you, Robbie?  I'm fairly certain that was directed at society at large.  No reason to be overly sensitive here.

Sorry if you felt insulted, Robbie.  No insult intended.  What I meant was that we should insist on the verifiable truth, even if the exaggerated story is about a group with whom we disagree.

I am Irish - I work with history and I am not a practising Catholic.  I read gravestones since 1996.

Where is this coming from re: Catholic nuns, yes they had control of me for five years.

I was a boarder in a catholic school for five years.  I never in one day saw   from the nuns

Disappointingly, my brother Dermot Nolan called me yesterday from Chicago, asking me what this was all about. I said where had he heard it? 'On NPR, National Public Radio in Indianapolis, yesterday morning, the entire country is talking about it', he said, 'and that's not good for Ireland or Ireland's image'. I tried to explain that the 'Home' in Tuam had been open for 40 years and that they had anything up to 400 children there at any given time from the 1920's on, and that 700 babies over that number of years was only around one or two a month, so it would not be really unusual, or nefarious, high infant mortality was a fact of life back then, and then I said that the babies bodies were not dumped in a septic tank, but buried in a plot, a small enclosed patch of grass, that unfortunately became part of a leech-field for a septic tank later, and how there was a 'Cilleen' in every town, where the unbaptised, the unfortunate un-named were buried without ceremony or rites..because the grave was un-marked, as most 'Cillins' in Ireland were, back then....and then I stopped, remembering marking the graves of pets at home, even the budgies and the gold-fish had little markers, but not our babies, and then I stopped making excuses, because I have no right to defend the indefensible, but I do defend Tuam, they should not be scape-goats for our failed institutions, especially the government ones, who managed the religious ones, who managed our shame.

Anne Marie Kennedy – To a Tuam Mother
Anne-Marie-KennedyAnne Marie Kennedy, MA in Writing, NUI Galway, is published in ROPES 2014, Black Heart Magazine and 4,3,3. She has work forthcoming in The Colony and The SHOp. She won ‘This is a story,’ a flash fiction competition and she is short listed for the Molly Keane Creative Writing Award, 2014.

To a Tuam Mother

Are you living at home in Attymon or Athenry, listening to Joe Duffy in private?
Or are you confined again?
In a communal place in a nursing home, or on a hospital bed, where you can’t get away from the news?

Are you terrified today, like when you were a slip of a girl?
Sent away by guilt-driven, God-fearing parents, or the curate-
That sent you to Tuam, from Taughmaconnell or Turloughmore.
To hide your shame, so as not to lay blame, but to make it go away.

And they did.
They hid you, and they hid him.

But you hear talk on the wireless of an official enquiry.
Will it bring to the light and what’s left of your life, the sixty year old, unmentionable child?

That you’ve never forgotten, or sometimes to be honest, you have.

But you’ve told no one; not your sister or husband nor the subsequent daughters that your almost virginal body bore.

Are you eighty and afraid?
Will names be named and will you be ashamed, again?

Thank for this article, i have been following stories  since I saw the movie philomeana

its rather disgusting and horrible in holy cathloic Ireland and to think I grew up in the era, and knew nothing about any of this.. my mother had  pregrant girls that came from the convent to work as maids in our home...surley my mother must have known something about all this ..??  .. I remember them working hard and looking after all of us 9 in total, helping mother...they got one day off a week..and they bussed it into Dublin by the time they got there half the day was gone...I remember the girls going back to the convent having the baby and telling me when they returned the the baby went to america..and they were lucky....I really dident   undstand this, or the pain the woman was going through with no one to talk to......I was a young girl.....