Irish mezzo soprano Tara Erraught has been turning heads in the international opera scene since 2011.  The Dundalk-born Erraught received her classical training from the Royal Irish Academy of Music in Dublin, and has already established herself as one of the opera world's hottest rising stars.  For many of us, Erraught's name has only come to our attention recently due to controversial reviews of her recent portrayal of Octavian in the Strauss opera Der Rosenkavalier at the Glydebourne Festival in England.

Several London critics wrote disparagingly about Erraught, but the criticism was of her body, rather than the singer's ... um ... singing:

Andrew Clark, writing for The Financial Times: "Tara Erraught's Octavian is a chubby bundle of puppy fat." He later noted that her performance was "gloriously sung."

Rupert Christiansen in The Telegraph: "Tara Erraught is dumpy of stature and whether in bedroom déshabille, disguised as Mariandel or in full aristocratic fig, her costuming makes her resemble something between Heidi and Just William. Is Jones simply trying to make the best of her intractable physique or is he trying to say something about the social-sexual dynamic?"

Richard Morrison in The Times of London: "Unbelievable, unsightly, and unappealing." 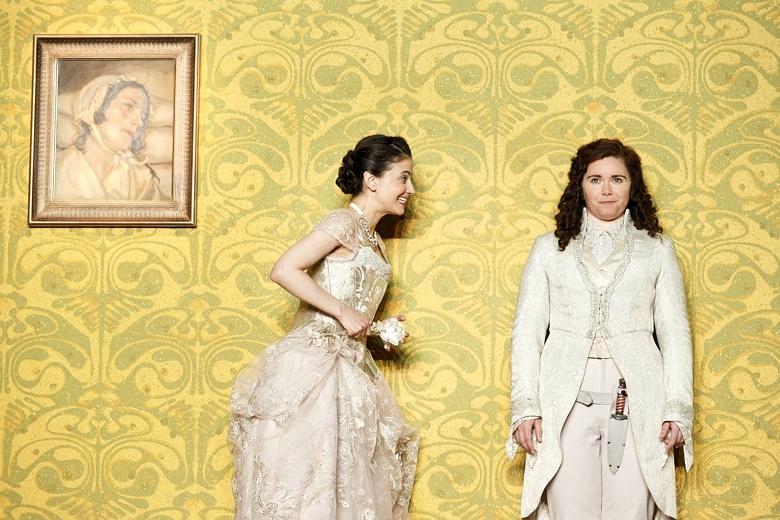 I'm not an opera buff, but isn't the opera scene supposed to be a bit more open to larger body types?  The not-so-svelte Pavarotti comes to mind.  Isn't there even a cliche about the fat lady?  And, by the way, Tara Erraught is not nearly as heavy as one might think from reading those critic's remarks.

To be fair to the male reviewers, they were not saying that full figured women do not belong on the stage.  They just didn't find Erraught believable in this role because of her looks.  In the production in question, Erraught is cast as a young man (a la Mary Martin as Peter Pan).  I will say that she makes a much more attractive woman than a man, and the costume designer hasn't done her any favours.  I think the critics could have stayed out of trouble by saying just that.  Instead, their barbs came across as very personal and misogynistic.

What do you think, Wild Geese?  Is it the case that opera is partially a visual art, and "not looking the part" is a viable criticism; or are these critics just being snooty chauvinistic air heads?  In my opinion, these guys have thoroughly compromised efforts by opera enthusiasts to show people like me that the art is anything above its exclusionary, vain, and silly stereotype.

Singers in Uproar Over Critical Body Insults at Glyndebourne

She's an attractive young woman who looks perfectly healthy to me.  Does she look right in costume and made up to look like a man?  No, but how many women would?!

I'm not an opera buff so I can't say whether the stage presence did not fit the bill here, but this kind of critique just seems to follow the 'Hollywood' style of trouncing actresses that carry any weight. I assumed opera was more about the voice than the body style. The critics in question seem mean and that was unnecessary.

Can't understand the kerfluffle here! I find Tara Erraught's looks very appealing. She can always lose weight if she prefers, but her voice, now that is an immediate and a tremendous gift to humanity! -- Ger

She has a very feminine body--very much so. She doesn't look like a teenage boy in a slightly padded bra. So, yes, in that role, she will look like a woman in male drag--wouldn't fool anyone. However, that being said, that is NOT what the "critics" said about her. Instead, they went for the "No fat chicks." mantra so typical of morons. The "critics" in question either probably biologically lack the capacity to be attracted to women at all (not that there's anything wrong with that) or--which is more likely--they are frustrated losers who've never managed to be "in the presence" of a woman without having had to pay her for the privilege.

Oh that Tara. Such beauty, such passion. See the sunrise in her face and the fire in her eyes. Oh to be counted among her friends. And sing, boy can she sing.....

Sorry, what were those men trolls saying about her again?

Critics have to justify their existence. They are the ultimate "hurler on the ditch." Much easier to stand on the sidelines and criticize the players than participate.

Comment by Paul Grajciar on June 6, 2014 at 8:31pm
So the young woman iz a bit Zoftig.We can't all be anorexic haute coture models.

a fine healthy woman- must have frightened some girly men

Yeah, I guess what they are trying to say is that she is TOO feminine to believably portray a teenage boy.  Fair enough, but why they expressed it the way they did is hard to figure.  They were really asking for the treatment they are getting now.  I hope Tara's career benefits from all the added publicity - I suspect it will.

Comment by Paul Grajciar on June 7, 2014 at 2:55am
This is society's stereotype of femininity
at play. Things need to change in that respect.