Dublin Castle was the seat of British rule in Ireland for over 700 years.  On top of the gate to the courtyard of the castle is a statue depicting Justice.  The statue is unusual for several reasons. The figure of Justice faces inward not outward as would be usual. This results in Justice facing the rulers of the castle and the statue turning its back to the city of Dublin and the Irish people in general.  Secondly, ignoring convention, Justice is neither blindfolded nor impartially looking straight forward; instead she  is looking admiringly at the sword in her hand and ignoring the scales of evidence.  As the events following the Easter Rebellion in 1916 show, the sculptor may have more accurately portrayed British justice in Ireland then he intended.

The Easter Rebellion, which had begun with the noble reading of the Proclamation of the Irish Republic by Padraig Pearse at the General Post Office (GPO), quickly descended into brutal urban warfare. After six days of combat, Pearse had ordered a surrender as he saw that the battle was increasingly descending into brutality. His decision was confirmed when he saw Robert Dillon, the innocent owner of a pub, attempt to evacuate his wife and daughter from the line of fire under a white flag only to see the three of them cut down by the crown forces.

With the surrender of the rebel forces and given the terrible suffering the fighting had inflicted on the city of Dublin it was a time for wisdom and sound judgment, a time where a spirit of justice could have won a great political victory. Unfortunately, such was not to be found in the British Military Governor, Sir John Maxwell. An unimaginative man whose Army career was already in question because of his involvement in the disastrous Gallipoli campaign, he seemed driven to redeem himself in the eyes of his political masters in taking a tough line with the rebels. He decided that the rebels would be tried in secret military courts-martial in violation of the very “Defense of the Realm Act” under which they were being prosecuted.

The defendants would be allowed no legal representation. It was a system rife with injustice, and between May 3rd and 12th, 1916, 14 men were executed, including all seven signers of the Proclamation. At times the sham nature of the “trials” became glaringly apparent. If William Pearse had been allowed legal counsel and a proper defense, it would be clear that he had no major role in the Rising, but rather he was convicted for the crime of being Padraig Pearse’s brother.  When Eamonn Ceannt asked to call Thomas MacDonagh as a witness, he was told that Thomas MacDonagh was not available as a witness as he had been shot that morning.

The harshness and injustice of Maxwell’s drumhead courts soon turned the hearts and minds of the Irish people. While the rebellion may not have initially had the support of the vast majority of the people, the fight that the volunteers had made against the overwhelming odds of the then greatest empire in the world had won their respect.  Even the British Prime Minister Herbert Asquith stated before the House of Commons:

“So far as the great body of insurgents is concerned I have no hesitation in saying in public that they conducted themselves with humanity which contrasted very much to their advantage with some of the so-called civilized enemies with which we are fighting in Europe...They fought very bravely and did not resort to outrage.” 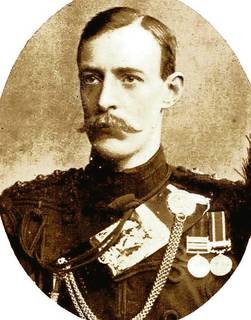 Unfortunately, the Prime Minister’s comments could not be applied to his own forces. During the height of the rebellion, a Capt. Bowen-Colthurst (right), invalided home from service on the Western Front, went to the British Barracks at Portobello. He found a well-known local character, Francis Sheehy-Skeffington being detained under suspicion of being a rebel sympathizer. Sheehy-Skeffington was a socialist, a supporter of women’s suffrage and a committed pacifist.  He had been attempting to organize a citizens committee to stop the widespread looting that had been occurring  when a commotion ensued and he had been mistakenly lifted as the instigator. Capt. Bowen-Colthurst ordered Sheehy-Skeffington’s hands bound and then he took him as a human shield on a “raid to look for Fenians.”

They came across a 17-year-old boy leaving Mass, Capt. Bowen-Colthurst ordered one of his men to strike him, knocking him to the ground and then Bowen-Colthurst shot and killed him.  Bowen-Colthurst then led his men to the shop of a local Dublin alderman, whom he claimed was a rebel (the man was actually a pro-British loyalist) and destroyed the building with grenades.  He “captured” two pro-British journalists. Upon returning to Portobello Barracks, Bowen-Colthurst had Sheehy-Skeffington and the two journalists shot by an improvised firing squad behind the barracks.

Bowen-Colthurst would go on to shoot another man and  ordered his men to toss him into the street to die of his wounds. The Barrack’s Commander, Major Sir Francis Fletcher Vane, a man of moral principle who had been absent from the barracks during Bowen-Colthurst’s rampage, was horrified at what had occurred and ordered Bowen-Colthurst placed under arrest and informed his superiors.

When General Maxwell, who was so diligently prosecuting the leaders of the rebellion, was notified he refused to order Bowen-Colthurst’s arrest. Instead a whitewash commenced literally: Royal Engineers were dispatched to fix the bullet holes in the Barracks courtyard, the bodies ordered buried and Bowen-Colthurst released to raid the home of Sheehy- Skeffington to look for after-the-fact justification for his murder.

However, Major Vane was a man of principle and took his evidence to London and the highest levels of the military and government where he pressed the issue till it could no longer be ignored.  Capt. Bowen-Colthurst was tried for murder, but  in a farce of a trial where prosecution and defense colluded was found not guilty by reason of insanity. Tim Healy, a well-known lawyer and politician of the time observed: "Never since the trial of Christ was there a greater travesty of justice."   Bowen-Colthurst was sent to an asylum for a short stint before he was declared sane and then released, receiving a full military pension until his death in 1965.  The noble Major Vane’s career was ruined; he was immediately dismissed from the army, his "services no longer required" and several attempts by Vane to publish accounts of his Boer War and Irish experiences were suppressed by vindictive military censors.

There were additional incidents. During the fighting at North King's Street, men of the South Staffordshire regiment entered civilian homes after the ceasefire and shot 15 men who were non-combatants. The officer commanding refused to attend an official inquiry into the matter, claiming he could find no British military witnesses.  The Coroner’s court ruled that two of the men, found buried in the basement of their home, had “been shot while an unarmed and unoffensive prisoner” and that if the British military had “any inclination they could produce the men responsible." Unfortunately, the British military had no such inclination. Instead a sham “identification parade” was held for the families of the murdered men. No one was identified; it would have been truly remarkable if anyone had been, for the suspects had already been transferred back to England. The facts of the inquiry were then sealed lest they be used for “hostile propaganda,” only being released some 85 years later in 2001. In the file, a notation was made “if the case had occurred in England, the right course would be to refer the case to the Department of Public Prosecution.” The people of Ireland were quick to note the hypocrisy of imperial justice.  Those who had days before jeered the Volunteers when they rose on Easter Monday now saw the nobility of their cause and the oppression they were fighting. Where justice and forbearance were warranted, the crown, through its military governor, delivered rashness and imprudence. In trying to stamp out the rebellion, General Maxwell fanned its flames and spread its embers to an Irish population that had previously not contemplated independence and for whom now nothing less would be accepted.

By being crushed by the steel fist of England, the leaders of 1916 ensured Ireland would slip from her grasp. One can wonder how different the outcome of Easter 1916 would have been, and how much future bloodshed could have been saved, if Justice faced outwardly from the seat of British administration and she gazed at the scales of truth and fairness rather than the sword.

It is interesting in the Centenary year of 1916, when we hear much of "examining the Rising in a new light" and of "inclusivity," the story of the honorable British  Major Vane (right) still goes under-reported while a political opportunist such as General Maxwell has a starring role on Broadway in "Bloody Irish."  Perhaps it is because the coverups and collisions of 100 years ago have an all too-familiar echo in much more recent history such as Bloody Sunday, Ballymurphy and Loughinisland. The Centenary should be a time to confront the past, and not just the censored politically correct version offered up by revisionists, so that we may learn from it and prevent history repeating itself.

Indeed , Neil F Cosgrove, a favorite   adage of my Grandmothers was " if we don't learn the lessons of the past , we are doomed to repeat them" ....

The politicians of the present day Ireland, have had it easy in comparison  to what the stalwarts of 1916 and the war of Independence had to cope with .......

The brutal murder of 15 Civilians on North King Street, with no arrest at all, is indicative of that injustice... In 1922 however, when Collins was executed , and supposedly with only anti-treaty and pro -treaty, present, that crime went unpunished, by the Leaders of the Free State ...

Excerpts from my article TWG  Jan 2016 ,........ " Mystery still surrounds Collins' death as all the witnesses gave conflicting statements, and, supposedly, there were only anti-Treaty and pro-Treaty Army personnel present. The lack of objectivity among those present, on its own, presents  a unique historical discussion, and the whole scenario reads like a “who done it“ drama. Most shockingly of all is the fact that the authorities did not investigate this crime properly, as it should have been.

Will Feehan and Singerson be able to get anywhere near the truth after all this time ... I do hope so.