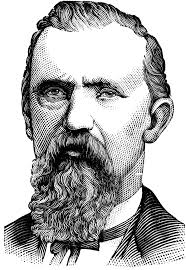 Jeremiah O'Donovan Rossa was born Jeremiah O'Donovan in Reenascreena, County Cork, on 10 September 1831. While he was the son of tenant farmers, the family could trace their ancestry back to nobler days when, before the English confiscation of Irish land, they had held the parish of Kilmeen. (The honorary title "Rossa" came from the town of Rossmore in that parish.) Rossa saw the horrors of the Great Hunger and Britain's indifference to Irish suffering first-hand as a child; losing his own father to starvation in 1847. He was then taken in by a cousin to work in his shop in Skibbereen; as per the song, the rest of his life would be dedicated to "Revenge for Skibbereen."

In 1856, the young O'Donovan Rossa formed the "Phoenix National Literary Society," a cover for a less-prosaic secret society dedicated to the liberation of Ireland. The name O'Donovan Rossa chose for his liberation effort was particularly apt, the Phoenix being the mythical Firebird bird that is reborn from its own ashes, which would become an enduring symbol of Ireland's quest for freedom. The "Phoenix National Literary Society" was a precursor to, and would later merge with, the much larger Irish Republican Brotherhood (IRB) founded in Dublin two years later. It would be future members of the IRB, which O'Donovan Rosa helped found, that would lead the Rising in 1916. The IRB would also adopt the name "Fenians" based on the legendary warrior poets of Irish myth -- the Fianna.

O'Donovan Rossa quickly gained notoriety as one of the IRB's most effective members, so much so that he was jailed by British authorities for 10 months without trial in in 1858. Upon his release, he became the editor for the Fenian newspaper "The Irish People" while secretly preparing for a rising to liberate Ireland. In 1865, the British authorities closed "The Irish People" and arrested most of the IRB leadership, including O'Donovan Rossa. O'Donovan Rossa was tried and convicted on the charge of high treason and sentenced to life imprisonment. He would spend the next six years in some of Britain's most notorious prisons. At one point, O'Donovan Rossa was manacled to a wall for 35 straight days; another time he was put into solitary confinement on bread and water tor refusing to take off his cap to the prison's doctor. In 1869, he was elected to the House of Commons to represent Tipperary, though the election was voided as O'Donovan Rossa was an imprisoned felon.

In 1871 after a public outcry over the scandalous conditions prevalent in the British prison system, O'Donovan Rossa and four other imprisoned Fenians, including the future IRB leader John Devoy, were offered release from prison on the condition that they would accept self-imposed exile. Boarding the S.S. Cuba, the "Cuba Five" as they became known, received a hero's welcome when they arrived in New York, where O'Donovan Rossa spent the rest of his life.  Such was O'Donovan Rossa's popularity that he was on his landing in New York put forth as a candidate for mayor in an unsuccessful bid to oust Boss Tweed of Tammany Hall. O'Donovan Rosa established his own newspaper, The United Irishman, and instituted a "skirmishing fund" to finance future risings in Ireland. His continued advocacy and use of physical force in England to achieve Ireland's independence soon caused a rift between O'Donovan Rossa and John Devoy, but it did bring Gladstone's first Home Rule Bill for Ireland to the floor of the British Parliament. In 1885, he was shot by an Englishwoman -- the British government denied responsibility, but even O'Donovan Rosa detractors did not fully believe this. 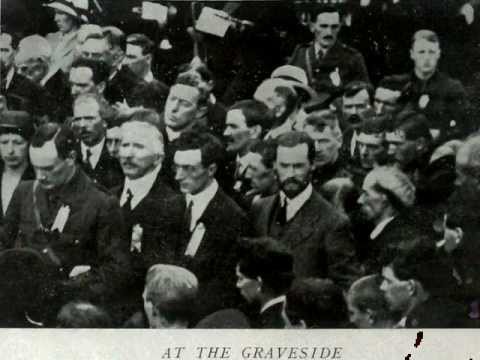 ineffective in dealing with an empire that would change the rules to its own ends, Irish nationalists saw the powerful symbology of O'Donovan Rossa and his link to the earlier armed struggle for Ireland's independence. While political rallies could be suppressed, not even the British authorities would interfere with a funeral. Tom Clarke, who would be the first signatory of the Proclamation a year later, telegraphed IRB leader John Devoy "Send (O'Donovan Rosa's) body home at once."

The body of O'Donovan Rosa was received a hero's welcome in Ireland. His funeral was one of the largest ever seen in Dublin, and Ireland was united in its grief and respect for the old unconquered Fenian. His funeral procession drew over 6,000 members of the Irish Volunteers, Catholic Church, GAA and other organizations marching to Glasnevin Cemetery in front of an estimated 60,000 onlookers. It was then that a young headmaster named Patrick Pearse (above-left: at the graveside) stepped forward to give O'Donovan Rosa's funeral oration, a speech that is one of the greatest orations in history and whose call still speaks to us today:

Like the phoenix he chose to symbolize his first efforts to win Ireland's independence. Ireland's march to freedom would arise new from O'Donovan Rosa's ashes at Easter 1916.

Comment by Thomas j shea on August 11, 2015 at 10:47pm
Tiochfaidh ar la.......fuck that, we need a spark now everyone who reads this tell four other "real Irish lads and /or lasses, the time is now, join my clan na Gael ( Irish American rep reserve unit called the real clan na Gael!!!!!!!!!

When I was researching Patrick Pearse I came across Jeremiah O'Donovan Rossa and have not got aroudn to doing any other research on him .. I Now have more understanding of this mand . Thank You

Neil, are you related to the Cosgrove who was a part of the Easter Rising? I can not remember his first name but I think he was a signatory of the Proclamation or the first president.( I cannot spell the Irish word for that but I think it is pronounced-teasheck)???