Patrick Gallagher was born in Derrintogher, County Mayo, Ireland on February 2, 1944. At the age of 18, Patrick immigrated to the United States for the promise of a new life, one filled with opportunity. He quickly started on the immigrant dream: studying law while working in real estate, even getting involved in local politics as a campaign worker for Senator Robert Kennedy. In 1966, Patrick was drafted for service in Vietnam. His heart-sick sister, also living in the States, urged him to avoid the horrors of war by simply returning to Ireland. Patrick, however, was committed to his new home in America and instead swore her to secrecy, along with other American relatives, to avoid worrying his family in Ireland. Patrick traveled to Ireland to visit his family, where he told no one that upon his return he would be inducted into the United States Marines.

Patrick shipped out to Vietnam as a member of Hotel Company, 2/4 Marines, 3rd Division. On the night of 18 July 1966, while serving in a forward position at Cam Lo with three fellow Marines who were sleeping, their position came under grenade attack by enemy forces. The first grenade Patrick was able to kick out of their position, where it exploded, only to be followed by a second grenade that fell between two of his comrades. Without hesitation, Gallagher threw himself on the grenade, willing to absorb the full brunt of the explosion to save his comrades. Miraculously, the grenade now pinned under Gallagher's body failed to go off. L.Cpl. Gallagher continued to lie on the grenade as his three comrades escaped the position while two more enemy grenades came in and exploded around him. With his comrades now in a position of safety and himself astoundingly unhurt, Gallagher's squad leader ordered Gallagher to roll off and threw the grenade, where it exploded upon hitting the ground. 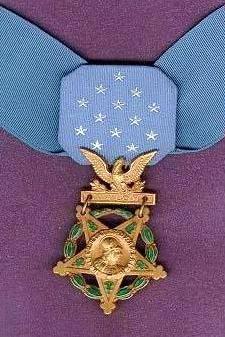 For his "extraordinary heroism and inspiring valor," Gallagher was awarded the Navy Cross. It is said that Gallagher was told that he was receiving the Navy Cross because “the grenade had not exploded and killed him. If it had, he would certainly have been a shoe in the Medal of Honor."  This is consistent with statements attributed to Gallagher's former executive officer -- that over his protests the Medal of Honor citation he had written was downgraded to a Navy Cross before being submitted to higher authority by his battalion. Again, the reason erroneously given for not recommending Lance Corporal Gallagher for the Medal of Honor was that his unselfish act of  heroism had not been fatal. There is no requirement, nor has there ever been, that a person must die to receive the Medal of Honor; the Medal is awarded for the act of valor performed, not what happened to the individual performing it. Tragically, two months after receiving the Navy Cross, due shortly to return stateside, L.Cpl. Gallagher was killed while on patrol.

(Right: The army version of the Medal of Honor.)

While certainly the Navy Cross is a prestigious honor worthy of the highest respect, the actions of L.Cpl. Gallagher on that night in Vietnam embody both in action and spirit the very reason why the Medal of Honor was established. Whether through misunderstanding the criteria for the honor or some other factor, the decision to downgrade the recommendation that he be awarded the Medal of Honor was clearly flawed.

There should never be a statute of limitations on the appropriate recognition of courage and valor.  Recently, Congress directed the Pentagon to conduct a further review of veterans who had previously been awarded Service Crosses.  As a result of that review, 24 heroic veterans have rightly had their awards upgraded, for it was found their actions merited our nation's highest honor.  Unfortunately, since Congress specified that this review be conducted specifically among service cross holders who were of Hispanic, Jewish and African-American heritage,  as a young Irish immigrant  L.Cpl. Gallagher's case has not been reviewed. We also note that the president recently conferred the Medal of Honor on First Lieutenant Alonzo Cushing more than 150 years after his gallantry at the Battle of Gettysburg. We should applaud all these actions doing justice, even belatedly, by those who sacrificed so much for our nation.

L.Cpl. Gallagher deserves to be given the same consideration.

Updated Note: When this article was originally written, the White House had initiated a program called "We the People" wherein the White House committed to review petitions submitted by citizens which achieved a threshold number of signatures.  This article concluded with a call for people to sign a "We the People" petition  asking that L. Cpl. Gallagher's award be re-reviewed for upgrade to the Medal of Honor.  For the many of you who did, thank you.

However, with the recent change in administration, the activeness of the "We the People" program is in doubt and it appear that  the L. Cpl. Gallagher petition was removed from the site.  We ask that people wishing to see  L. Cpl. Gallagher be given the recognition that his actions of 18 July 1966 properly merit to please contact their local Senate and Congressional representatives and ask that his award be reviewed for possible upgrade following recent precedent.  There is also a petition under way to have a Navy ship named for , the petition may be found here https://www.ipetitions.com/petition/patrickgallagher