Edward "Ned Daly" is one of the 1916 Easter Rising leaders less known for his role as Commandant in the Irish Military Brotherhood.  Out of a family of ten children, he was the only son born to Edward and Catharine Daly (nee O’Mara) in Limerick.  His father was a Fenian and his uncle, John Daly, was a prominent Republican who had taken part in the Fenian Rising of 1891.  Steeped in the traditions of Fenian ideology, it is no surprise that he would follow in the footsteps of his father and uncle.

His sister Kathleen was married to Thomas Clarke who was also a prominent member of the Irish Brotherhood.  Unfortunately, at the age of 42 years, Daly's father died some five months before the birth of his only son.  Ned Daly only knew his father through oral discussion and photos within the family.

Daly was educated by the Presentation Sisters and the Congregation of Christian Brothers.  He also spent some time at Leamy’s Commercial College.  Although he was never considered to be a brilliant academic student, he did show his skills in all things practical.  He moved to Glasgow, Scotland and became an apprentice baker for a short time before moving back to Limerick.  Once there, he spent time working at Speights Timber Yard before prior to his move to Dublin where he would live with his sister Kathleen and her husband Thomas Clarke.  In Dubin, Daly found work in a wholesale chemist shop.

By this time, he had immersed himself in the Irish Republican Brotherhood and reveled in the knowledge that he was one of only a small number of Irish men who were a part of this general movement.  It is a proven fact that he was, indeed, a member of the Irish Republican Brotherhood.  It is not known, however, when he actually joined.  It has been said that it was Thomas Clarke who initiated him into the Brotherhood.  Daly joined the newly founded Irish Volunteers in 1913.  He displayed professionalism, skills, and knowledge of military tactics including the training of his company and immersing himself in all military actions (such as the Howth gun-running).  He also helped Patrick Pearse organize the military funeral of the prominent Fenian Jeremiah O’Donovan Rossa in 1915 (he had been exilied to America).  This soon brought Ned Daly to the attention of his seniors.  In 1915, he was duly promoted to the rank of Commandant of the 1st Battalion.

On Easter Monday, the 24th April, 1916 and during the week of fighting that followed, Commandant Ned Daly was deployed with his troops to be based around the area of the Four Courts.  As was his role as a Commandant, he took it upon himself to raid the Bridewell Barracks.  It was there that his troops found 24 Dublin Metropolitan Police hiding in their cells.  He captured Colonel J.P. Brereton of the British Forces and held him in the Four Courts.  By Brereton's own account, he was treated with the utmost courtesy and respect by Daly’s troops.

Following on from that success, Daly gave orders for the Linenhall Barracks (this building housed the Army Pay Corp.) to be burned, thus disrupting the British systems.

Fierce fighting soon broke out between Commandant Daly’s 1st Battalion and the British Troops.  These pitched battles were fought all around the narrow streets of Smithfield’s up around by the Four Courts and the market area of Dublin.  When the order to surround came, Daly displayed magnificent leadership by ordereing his men to lay down their arms. 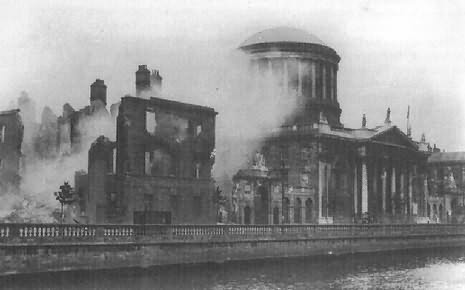 However, there was an incident after the surrender.  It has been said that some British troops lost control of themselves, battering their way into houses along North King Street and shooting some male residents indiscriminately.  The discovery of two shallow graves after the Rising led to an investigation.  This incident, combined with the treatment of all of the 1916 Easter Rising Leaders, helped sway public opinion in favor of the Irish Republican Brotherhood and their cause for a free Ireland.

The Capuchin Friars and the Jesuit Priests were on hand to minister to all of the 1916 Easter Rising Leaders.  Captured  outside of the Four Courts and taken to Kilmainham Gaol, Daly was duly courtmartialed and sentenced to be executed by firing squad.

On the 4th of May, 1916 at the age of 25 years, Ned Daly was shot dead and took the dubious honour of being the youngest of the 1916 Easters Rising Leaders to be executed.