Colonel Knox Walker was in command of 2nd TN. Infantry Regt, a.k.a. “Irish Regiment”. Early uniforms made by the ladies of the city consisted of a dark, 8 button, frock coat, trousers, and kepi. The men would carry flintlock or conversion muskets. On completion of basic training, the 2nd was sent to Columbus Kentucky where they would assist in the construction of water batteries before seeing their first action at Belmont Missouri on November 7th, 1861.

1862 would see the Tennessee Irish back in their adopted state and at Shiloh. The regiment took extremely heavy casualties, so much so that it would necessitate consolidation with 21st TN. (also Memphis origin with a large Irish contingent). The new unit would be designated as the 5th Confederate Infantry Regiment and it would go on to establish a reputation as one of the western army’s most reliable regiments and become a favourite of Major-General Patrick Cleburne.

The autumn of 1862 would see the 5th acting as escort for General Bragg’s Pioneer Corps during the Kentucky campaign. They were released from this duty and participated at the Battle of Perryville where they traded shots with the 10th Ohio, a Federal Irish unit. The action between these Irishmen was severe with the Federals having the upper hand. Despite running low on ammunition (the 5th was twice resupplied) the Confederate Irish continually refused to yield and were, eventually, joined by the 37th Tennessee and then by Gen. Cleburne leading his brigade onto the field securing the victory. By the end of 1862, the regiment had, again, returned to Tennessee and Murfreesboro before going into winter quarters at Tullahoma and then Wartrace.

Chickamauga in September 1863 would, once again, see the regiment’s high rate of attrition continue with Captains James Beard & George Moore among the fallen. Even though not part of his brigade, Gen. D.H. Hill was high in his praise for the Memphis Irish. Onto Missionary Ridge and again against overwhelming odds the regiment held until, finding themselves isolated, the 5th finally gave way. Gen. Cleburne used them at Ringgold Gap and his strategic placement of the regiment helped save the Southern army.

The following year would see the regiment involved in virtually all the engagements of the Army of Tennessee from Resaca in May through to Nashville in December even though it was now numbered less than 170 muskets. At Atlanta, these would be reduced further when a large number of them were taken prisoner after a ferocious struggle. Indeed the remnants of the regiment became disjointed in heavy woodland near Peachtree Creek. As Lt. Beard and corporal Coleman emerged onto the road from the woods just as Gen. James B. McPherson and his staff were approaching. Corporal Coleman quickly fired off a round at the Federals, hitting and instantly killing Gen. McPherson. The Confederates were soon taken prisoner and, eventually arrived in Utica, allegedly as the General’s body got there. Corporal Coleman’s comrades later spoke of the young man’s distress and regret at his impulsiveness. 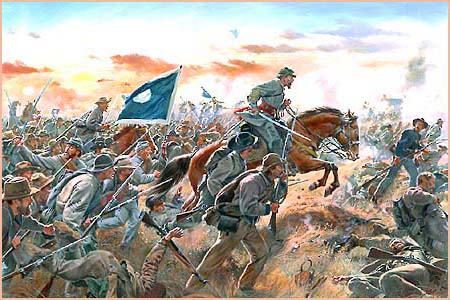 November 30 1864 would see the 5th Confederate Regiment at Franklin where it formed part of Granbury’s brigade. Gen. Cleburne, however, sought them out and placing himself at their head, he would lead their charge to the Federal breastworks around the small Middle-Tennessee town. Like the General many would fall, indeed Pvt. Richard “Dick” Cahill’s body was found inside the works with, at least, 4 bayonet wounds through his head the following morning. Later on, December 1, 1864, just 21 men from the 5th would answer the roll.

(Right: The final, tragic, moments of Patrick Cleburne at Franklin, as painted by artist Don Troiani.)

Within 2 weeks overwhelming Federal numbers would force an overall Southern retreat from before Nashville; it would not be easy for many of the soldiers were barefoot, clad in rags, and faced with constant harassment from pursuing Federal cavalry. They would finally reach Corinth Mississippi before being sent to North Carolina.

Here just before the Battle of Bentonville, the remaining members of the 5th would again be joined with other units to form Co. I, Consolidated Tennessee Infantry. When Gen. Johnston surrendered his army on April 26 1865 just 10 soldiers of the 5th Confederate Infantry Regiment laid down their muskets.