The West, the American West, is the place in our souls where romance and reality meet head-on. Ironically it is also the place where reality and romance have always met head-on. Ever since “the West” was that ill-defined space on the map west of the White Mountains, west of the Catskills and west of the Alleghenies, the West has been the place we build our myths and lose our illusions. It has also been the place where men (and women) lose their grasp of the small rules and small conventions of the East and become legends.

One such living legend was Hugh Glass, the half-remembered frontiersman. Glass was left for dead by his fur-trapper companions in the hostile howling wilderness of the frontier in the early 1820s. His survival and quest for vengeance is the inspiration for "The Revenant," a recently released movie featuring Leonardo DiCaprio as Glass and Tom Hardy as John Fitzgerald.

The saga is one of the great stories of the American West: A party of fur trappers deep in the hostile territory of what is now the Dakotas -- but was then the contested battleground of the Pawnee and the Arikara -- abandons their gravely wounded guide. The guide (Glass) then -- driven by sheer will and a lust for vengeance -- crawls 200+ miles through a snowy wilderness to hunt down the man he blames for abandoning him. The legend of Hugh Glass lives then in the dark part of our collective memory, where vengeance and justice hold hands, where men are as terrifying as bears, where what passes for civilization is a thin veneer of rules on a land where order is what you make of it and life must be fought for.

But the forgotten story of Hugh Glass -- and John Fitzgerald and Andrew Jackson for that matter -- is a story of a hard man born of hard people in a country of endless opportunity. It is the story of the first few generations of Ulster-Scots and Scots-Irish making their mark on America.

The Ulster Scots of the 18th (and 17th centuries) are the forgotten “Irishmen” of America. And yes, some will probably quibble that the Ulster Scots are Scottish, not Irish, not ethnic Irish at least. But this is America, and, eventually, if we dig deep enough, we all have to acknowledge that ethnic identity and geography don’t always match up as neatly as the written record would suggest. Many of the Palatine Germans of Pennsylvania are descended from people who did not live in the territory that became modern Germany. (And some are descended from a group of Germans who spent a generation or two in Ireland!) More recently one of my own great-grandmothers was born a subject of the next-to-the-last tsar of all the Russias, but she was not Russian, did not speak Russian and had no affection for, or loyalty to, the tsar. Still, a part of her was born out of the contested bloody battleground of the fringes of the Russian Empire. In the same way, a part of America -- or at least a part of the American frontier -- was born out of Ulster.

An depiction of Hugh Glass, being mauled by a grizzly bear in 1823, from a 1922 Milwaukee Journal newspaper article. Source: Wikimedia Commons 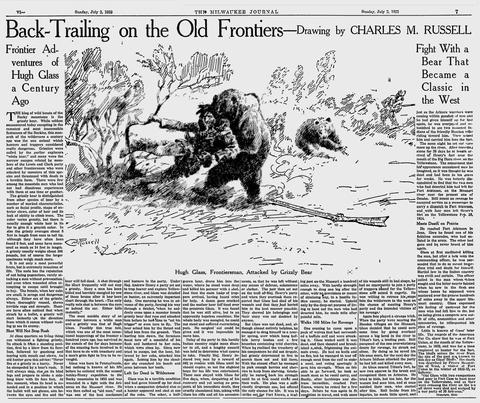 The Ulster-Scots who took sail for America in the 17th and 18th centuries packed up their bags and cast their lot upon the Atlantic for many of the same reasons their English, French, Dutch, German and Swedish contemporaries did: They wanted more and they were optimistic enough, or naive enough or possibly simply crazy enough to think that they could find it, build it or steal it in America. The early settlers were thus a bizarre mix of religious dissidents -- religious schism has been a way of life in America ever since the Dutch shrugged their collective shoulders in New Amsterdam and basically said, “Pray as you wish, please don’t burn anything down” -- and freebooters in rapid pursuit of a fast profit. As the descendants of the Bay Colony’s Puritans like to say, “Some came for God, and some came to fish for Cod.”

Thus, the Ulster Scots were not necessarily any different from any of the other very different groups that came to America. But they did display an early, consistent and frankly disproportionate interest in the frontier -- wherever that frontier happened to be.

Some of it may have been simply a matter of timing. As stern Protestants, the Ulster Scots were (relatively) welcome in most of the Eastern colonies. (Whether anyone ever felt truly welcomed in Puritan Boston is questionable -- the Puritans had even managed to pick a fight on religious grounds with the Quakers. Or perhaps it was the other way around, despite being pacifists the early Quakers were remarkably committed to publicly protesting anything and anyone they disapproved of.) However, the Ulster Scots had come to America relatively late compared to other groups, and much of “mapped” America was already staked out. The Boston Puritans were already well on their way to becoming the Boston Brahmins. The great patroons of the Hudson were becoming even richer. The frontier -- wherever it was -- was the best option for many Ulster Scots who were willing to endure incredible hardship in pursuit of a better life.

The Scotch-Irish (aka "Ulster Scots") made their way to what became Londonderry, New Hampshire, in 1719. In the mid-17th century, one of the first English-speaking men to cross over land to Lake Champlain was probably an Ulster-Scot. (As was often the case in the 17th century, he optimistically assumed that China -- and all her wealth -- was somewhere on the other side of Lake Champlain. Optimism and enviable survival skills would always be a characteristic of the Scots-Irish in America, geography not so much.) A generation or two later, the Scots-Irish would be among the first settlers to push into western Pennsylvania -- the land was cheaper, and they didn’t mind having to fight for it. Thus, when the 13 colonies finally stitched themselves into a nation and fought for independence, the American Scots-Irish already had almost a century’s worth of experience as frontiersmen. Andrew Jackson was a boy hero of the American Revolution, hero of the War of 1812, Medal of Honor recipient, congressman, senator, founder of the Democratic Party, quite possibly the first true American populist and a savage frontier expansionist. In fact, the word “genocide” has been used to describe Andrew Jackson’s opening of the frontier. This son of Scots-Irish emigrants from Antrim also became the 7th president of the United States.

By the time Jackson was winning laurels and frankly terrifying the British forces at the Battle of New Orleans -- where Jackson defeated a British force made up partially of Highlanders -- a new generation of Scots-Irish frontiersmen were heading much further west into the uncharted territory of the Great Plains and the Rocky Mountains. And it is there that the twinned legend of Hugh Glass and John Fitzgerald both begins and ends. In the savage cold winter of frontier America, Hugh Glass fought a bear and the West itself and lived to tell the tale, and John Fitzgerald fought Hugh Glass and did not live to tell the tale.

So ... to the nitty gritty of this new film. Will you feel as if "The Revenant" has dumped you in the wilderness of the 1820s? Maybe. It is confusing enough, in a good way. Few outsiders probably ever did understand the wars of the High Plains. Will it show you the West as it might have been? Absolutely. (The cinematography is amazing.) Will the story intrigue you? Maybe. The Hugh Glass story is a story of survival in its rawest form. (Ironically the best actor in a movie that is very well cast is Tom Hardy, and he is playing the “bad” guy. Although good and bad tend to exist in a grey world in the American West -- an invention more of 1950s-era movies than real life.) As a movie, is "The Revenant," nominated for 12 Academy Awards this month, likely to become as legendary as "Dances With Wolves"? Absolutely not. (Sometimes fiction draws us in a way that “true-life” does not.) Is it as good as "Jeremiah Johnson" -- also a frontier movie based on true life -- yes.

Two interesting links about the history that underpins "The Revenant."

It's a great film, but it does fudge history for that bloody and brutal ending. Glass didn't actually kill Fitzgerald. He tracked him down at a fort in Nebraska but Fitzgerald had joined the army by then and Glass didn't try to kill him, possibly because it would be hard to get away with killing a soldier at a fort. He got his rifle back though. That wouldn't have been quite as dramatic an ending for a movie.

Thanks for your excellent review, Sarah. I appreciate the historical background about the Ulster-Scots. My one maternal great-great grandfather hailed from Newry and established family roots in west-central Pennsylvania. My paternal great-grandparents came from Kilkenny and Louisburgh and settled in the same locale of Pennsylvania. One of my paternal great-uncles did go west, however, to settle in Colorado. The movie sounds like a new western classic to include on my watch list.

Don't go to this movie if you expect an informative or historically accurate summation of the issues underpinning the Irish/Scottish invasion of America or much about what they did when they got there, apart from exercising their 'right' to take what they wanted from the natives. There's lots of nice scenery, graphic violence and pain and a sub-plot that makes no sense but helps make Leo look good - maybe he had input to one of the numerous re-writes it took to get a shootable script. I found it long, tedious and ultimately uninvolving in spite of the $135 million it cost and the attention the special effects team paid to 'realistic' wounds and blood-letting. I regret spending a cent in supporting this shallow, overblown 'entertainment'.

Des Wade . I regret seeing it as well for much the same reasons as you