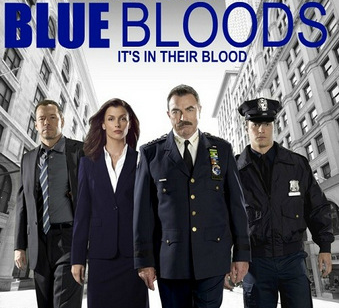 There is a place where fiction overlaps reality and creates a place where half-truths and should-have-beens and never-really-were’s create something that is less than factual and more than fictional -- "Blue Bloods" occupies one such place.

The multi-season television drama plows old ground -- cops, New York (the city looms like the character it is, no one ever bothers to tell the stories of upstate, some ground too rocky and cold to plow), an Irish family. Tropes and stereotypes all. Ingredients as predictable as my grandmother’s St. Patrick’s Day dinners. (For the record: Iceberg salad -- she did try to get “the boys” to eat green vegetables -- followed by boiled cabbage, corned beef with the same basic flavor and consistency as rubber bands, boiled potatoes, mounds of butter, peas that had been boiled for almost as long as the potatoes, all followed by Italian cheesecake. Unless, for some reason there was traffic that resulted in a dreadful ricotta shortage, snow, or the incident with the dog, and then we would have Neapolitan ice cream from Pathmark, while my grandmother prattled on about the cheesecake that should have been, her friend who-retired-down-to-Boca-and-never-even-wears-socks-anymore. And my grandfather sipped Canadian Club, all the while the television blaring with post-parade coverage in the other room watched only by the dogs.)

"Blue Bloods" is, at heart, so predictable that I am amazed it didn’t make it to the screen 20 years ago. (In fact, if you watch "Law & Order," some of the characters will look weirdly familiar -- some of the character actors have graduated from continuing bit roles in one New York law enforcement drama to continuing bit roles in another New York law enforcement drama.) At the show's heart -- three generations -- four if you count the kids, but they aren’t on "the Job," yet -- of a devout Catholic Irish-American family who are pure NYPD.

All the men have been, or are, in uniform. Including the son who dies before the series’ start and makes a close-knit family even closer. The only daughter, Erin, played by Bridget Moynahan, is a prosecutor who pursues convictions with the same dedication her brothers pursue criminals. All while trying to keep her brothers, particularly her hard-bitten walk-the-line brother Danny, played by a seething Donnie Wahlberg, out of trouble. In fact "the Job" -- always, always, always, capitalized -- seems to be the only Job anyone in the family has ever considered. Even the pretty-boy youngest son, Jamie, played by Will Estes, ends up in uniform after a far-fetched Ivy League education.

Jamie’s stint in the Ivy League isn’t the only story-line that pushes the far edges of believability. Frank Reagan, played by Tom Selleck in what may be his best role ever, is the P.C. (police commissioner) His long-retired father, Henry, played by Len Cariou, is theoretically a retired P.C. who still enjoys gossiping with his fellow retired warhorses and meddling in his son’s and grandsons’ careers. Family dynasties aren’t that uncommon on the Job. Brothers join brothers on the Force, sons follow fathers into uniform. If someone had a hook, especially in the old days, you used it. Back in the day, they always said the mounted division was so prestigious you had to inherit your mount to get a placement. And be Irish, of course. (Those were the days when the NYPD mounted division was still known as the Irish Cavalry.)

That dining room where I ate Neapolitan ice-cream as a child? There was a photograph on the wall with two generations of Nagle men, shoulder to shoulder, in uniform. At home, the service revolvers always sat, loaded, on the top shelf of my grandmother’s china cabinet. A metal box of ammunition next to the napkins. To this day the smell of gun-oil and detergent makes me a little sentimental.

But these days that sort of world doesn’t really exist anymore. The Irish are no longer the dominant force in the civil service. And nepotism bothers people these days. Having a hook isn’t something people understand anymore in much the same way that they don’t understand that during Prohibition every single uniform in New York would nod the beer trucks on while they made their deliveries. (Federal law? Ehhh . . . New York was a wet city.) Before my time, long before my time. But I heard the stories. And I heard the punchlines to stories that are a bit darker than anything on "Blue Bloods" and that is perhaps why I have developed a bit of a lingering affection for the show.

Although I am glad I missed the first season . . . which started off weakly, and in the unforgivably overwrought world of conspiracy theories. Co-operating with the FBI? Ehh . . . No one who grew up in the tribal world of the Reagans would cross that line. Ever. Now well past its all important 100th episode, "Blue Bloods" has joined "Law & Order" in the perpetually available list of reruns. Don’t bother watching them in order. The writers flirted with a continuing story line for awhile, but this is a character-driven series about the individual stories that shape us, the stories that are often hinted at rather than told. Each episode is best as a stand-alone chapter in the life of a family and the life of a city.

There are bloopers in "Blue Bloods." A lot of them. Some come straight out of wardrobe and deserve a chuckle. A precinct scene with a few uniforms in the back pulled out of the vintage closet. The Reagans gathering each week for their Sunday dinner in a near mansion on Staten Island. Two generations of police commissioners sitting at the same table? Both Irish? These days, not likely. Politically unfeasible. A P.C. with too much integrity to use a hook to get his son a promotion? Unlikely. These days the NYPD has decent pay grades, but back in the day no honest cop, even with rank, would have a house like the Reagan family house. But the stories and characters have a certain truth and a familiar appeal, a bit like the smell of gun oil and the taste of ice cream.

Comment by Susan O'Dea Boland on March 5, 2016 at 6:50am
Sarah
Thanks so much for posting this. I watch this show every week, and never bothered to put into words why as you do here. When the inevitable family dinner scene comes, I think back to my own family dinners when I was a child...and it was just like that, but an Irish American judge and lawyers instead of Irish American cops. I must say this, though ...the conversations over those dinners have served me well over the years.
Thanks so much for this thought provoking piece.
Susan

My root in this country are so shallow (being right off the boat as they say) I guess the Reagans are my substitute clan...

I also watch this show and admire the fact that 'Hollywood' allows such a proclamation of Catholicism! Not that it stops the Reagan's from acting un-Catholic (but that is reality these days)... but those family dinner scenes I find quite refreshing :)