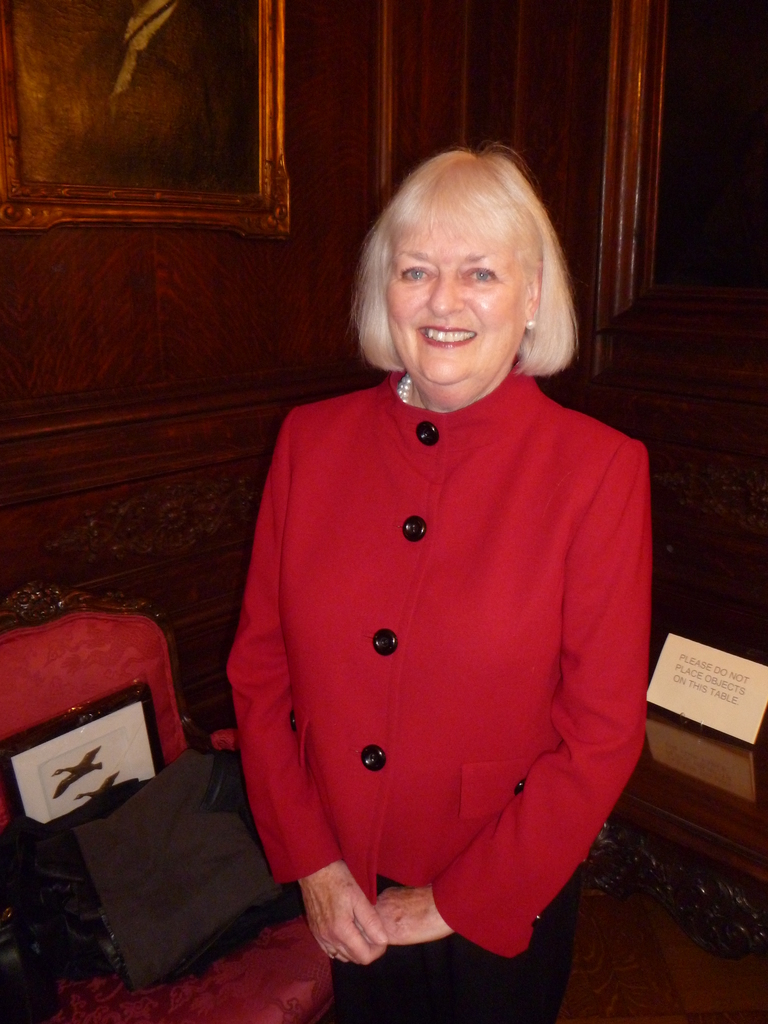 A casual observer may have thought the crystal chandelier in the parlor room of the American Irish Historical Society building on 5th Avenue gave off the brilliance in the room on April 17, 2014, but in truth the brilliance of the evening emanated from Catherine Duggan who spoke that evening about the Brehon Laws.  Ms. Duggan had been invited by the New York City Brehon Law Society to speak about her book The Lost Laws of Ireland: How the Brehon Laws Shaped Early Irish Society.    Clearly, Ms. Duggan was the perfect speaker to speak on the perfect topic for a Brehon law group to the perfect audience for her topic and in the perfect American Irish Historical Society place.

Sean Downes, the Society’s president, introduced Ms. Duggan as an attorney who practices law in Oakland, California and as an Irish-American with a passion for a part of Irish history which had long intrigued her.  Her passion and her dogged desire to know aligned with her scholarly resolve to produce her book.

Ms. Duggan underscored fairness as the thread that runs so true through all of the Brehon laws.  These laws were the laws used to govern Ireland for one thousand years.  She attributed their longevity to their being based upon the values of the society and their being endorsed and enforced by the members of the society.  The Brehon laws were Celtic laws, not the Roman law which dominated most of Western Europe.  The Irish inherited the Brehon laws in the oral tradition which was transcribed by monks in the years 650-750 AD, the laws, in their written version, absorbing from the monks a Christian influence.  The transparency and predictability of the Brehon laws gave these ancient laws a modern caste which the attorneys at Ms. Duggan’s talk very much appreciated.

Ms. Duggan gave her audience an overview of major details from the Brehon laws.  She mentioned that contracts had to be fair to both sides and that they were far fairer than contracts in Roman law.  She pointed out that, in the earliest times, Irish women like most European women had few legal rights and yet the Brehon laws provided that women could divorce, inherit under certain circumstances, and manage their own property after marriage.  The extent and nature of these legal rights placed Ireland in a singular position in the Europe of the time, and compare favorably with modern legal approaches.

Ms. Duggan’s fascinating talk introduced her listeners to the Brehon law’s consideration of a defendant’s mental state in a criminal case, a consideration we often attribute to law in the era post- Freud.  Most favorably received was the Brehon law’s assumption of social mobility.  A person was ranked in society by honor: “A man is better than his birth.”

Ms. Duggan was enthusiastically applauded after her talk and challenged by incisive questions which confirmed that Ms. Duggan’s audience was knowledgeable and attentive.  Ms. Duggan’s book rested that night on the night stands of many members of the audience.  The Brehon laws are now a part of the legal education of many New York lawyers.

For a fictional use of Behon Law, I recommend Cora Harrison's medieval mystery series. The one that comes to mind is "My Lady Judge."

When St. Patrick's charioteer was murdered, St Patrick demanded the death of the murderer.  This case was referred to the chief Brehon of Ireland who had recently converted to Christianity and who agreed with St Patrick with his decreed that the murderer should die.  The Irish declined to follow St Patrick and the murder remained punishable by fine paid to the relatives of the slain person.

From The Story of an Irish Sept, The Orgin and History of the MacNamaras, by N.C. MacNamara, first published in 1896 and republished by Martin Breen (p 18-19). This passage is footnote attributed to Student's History of England by S. R. Gardiner (p32).