James Joyce's 'A Painful Case' Comes to a Happy Conclusion 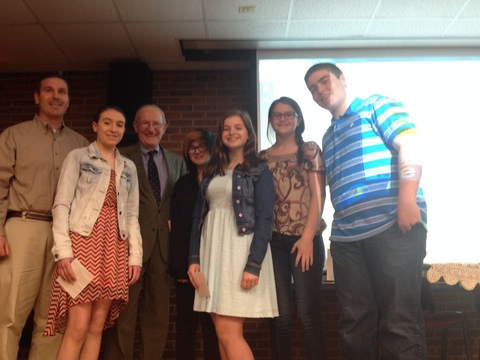 The Irish Cultural Society’s 2014 writing contest centered on James Joyce’s “A Painful Case” from Dubliners resulted in a happy Society which received 425 entries and a happy group of 36 high school students from Nassau County who won prizes for their entries.  The contest asked the students to write a dialogue between the two principal characters from “A Painful Case" at the point in the story when they meet for the last time.  Joyce describes the meeting in Phoenix Park but does not include any dialogue.  The students wrote marvelously imaginative conversations between the characters, becoming, in a sense, James Joyce’s editors.

Over 90 people attended the Society’s Awards Ceremony at the Garden City Library on May 7, 2014.  Host Anne Fitzgerald applauded the teachers who had motivated their students to produce creative scenes of the tense last meeting between Mr. Duffy and Mrs. Sinico.  She introduced John Walsh who described the writing task to the audience which was filled with parents, grandparents and brothers and sisters.  Anne and Joe Ferrick, Society treasurer, presented the awards to the winners, cash prizes ranging from $200 as the top prize to $40 for Honorable Mention awards.

Pictured above are the happy winners of awards from Douglas MacArthur High School, a school in the Levittown District, along with their teacher Michael O’Shea and John Walsh of the Society.

The list of winners is posted on the Society’s web site Irish-society.org along with six of the top papers.