It's the stuff great films and spellbinding stage performances are made of.  In the case of "The Last Torch," though, the story is plucked right from the history books.  To be more specific, in this case, the story is taken from the personal journey of 16th century shipwrecked Spanish Armada Captain, Francisco de Cuellar.

Frances O'Neill's epic stage drama with soaring vocals will make its world premiere during the Melbourne Fringe Festival at the Beckett Theatre in Cooper's Malthouse from October 1-4.  This is a tale which reaches back into O'Neill's own family history; she is a descendant of the O'Rourkes, Lords of Bréifne.  The O'Rourkes owned vast rugged landscape through which Captain de Cuellar made his perilous journey to escape the certain violent death awaiting him if he had fallen into the hands of pursuing English forces.  The Captain's ship had been smashed upon the rocks of the northwest Irish coast in the midst of the Anglo-Spanish War, and the head of a Spanish Armada Captain would have been a highly sought-after prize.  De Cuellar could not have known what to expect as he stumbled through the Irish countryside, but what he found in the spirit and character of the O'Rourkes is what makes this an intriguing tale.

It's a story that has been waiting more than four centuries to be told.  If you're in the Melbourne area this October, you will have the chance to be the first to lay eyes and ears on this heroic tragedy.

Tickets may be purchased here.

Read more about the plot and watch the brief preview video below: 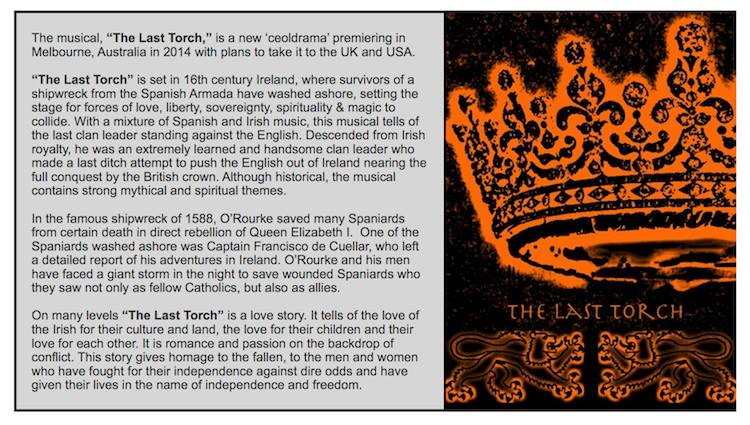 So exciting, Fran!  Looks like it will be wonderful.

Hoping this story comes home to Ireland soon, and then on to North America!