their fates soon sealed with the headhunters wield, and where red still stains the loam.

The shadows and echoes permeate the land, where O'Hanlon's ghost holds sway

in old Aughanduff behind the school, at the foot of the steep Pike's brae.

From the feared black bank the land was controlled, with no escape for innocent men,

where the brutish Keenan did his work, on the road, in the fields and the glen.

When MacMurphy ran with his band of men, and fooled both a king and his crown

From Silverbridge to the Beardies brae, and on down into Forkhill fair,

to Mullaghbawn round the crooked lake, and the Flagstaffs clean, fresh air.

From Newtown down the cursed black road, all the way to McDackers’ den

The poets ran for Gullions’ slopes when chased by Johnstons’ men.

From Dunreavey woods and Cashel lake, to Carnally and Ravensdale,

to Dorsey and its ramparts, along the road to old Creggan vale.

In the old churchyard beneath the trees, the prince and the poet both sleep,

the headhunter’s bones lie cold in the ground, his cursed mortal soul to keep.

But late at night they rise from the grave, with the sound of the clock’s loud chime,

once hunted in life and forever in death, they still ride on the cold winds of time.

In 1740 a rumor swept across the countryside of the troubled area in South Armagh known as the "Fews." The area, once held as the bastion of the ruling O'Neil dynasty, the Lords of the Fews, was under increasing pressure from the English crown who desired full control and from the rapidly increasing influx of English and Scottish settlers. The rumor, whispered in shebeens, farmsteads and cottages, soon spread like wildfire throughout the entire countryside. Word had come that the Catholic pretender to the English, Scottish and ultimately, the Irish thrones had assembled a large Jacobite army and was planning another rebellion against the English crown forces. Charles Edward Stewart (Bonnie Prince Charlie) was widely supported by many highland clans, both Catholic and Protestant and had a large following in Ireland, particularly in South Armagh. Charles hoped for a warm welcome from these supporters and for his plans to begin an insurgency throughout the British Isles. He raised his father's flag at Glenfinnan and gathered a force large enough to begin marching on the city of Edinburgh. If his rebellion was successful it would have far-reaching, positive repercussions for the downtrodden people that occupied South Armagh.

During the late 1600s and early 1700s, the area in south Armagh called the ‘Fews’ acted as a refuge and hideout for anyone deemed to be ‘enemies of the state.’ Catholic clergy were despised and hunted down relentlessly as the Penal Laws began to take effect. During those dark, frightful days two types of large, flat rocks were utilized. One type, usually taken from the rubble of a demolished church, was used as a makeshift altar as a mass rock where Catholics gathered in secret to pray and the other type was used for the barbaric act of beheading an individual.

In 1701 a regiment of English foot-soldiers had their headquarters at the Black Bank Barracks which was sited 4 miles north of the town of Newtownhamilton, approximately halfway between the towns of Dundalk and Armagh on the main thoroughfare. After a violent year, culminating with a series of killings which included the English Captain Groves and ten of his men, the new barracks was planned and built by Sir William Robinson in around 1695. It's primary purpose was to guard and make safe the 20 miles of what was then referred to as the 'Black road.' In 1710 an individual new to the area named John Johnston, was sworn in as Constable of the Fews and by the time he finished his years of tenure, South Armagh, and in particular, the outlaw poet MacMurphy and his band of rapparees, would forever remember and curse his name. Johnston, known locally as 'The Scourge of the Fews', was born in Scotland in 1684, the son of John Johnston and Sarah Graham. He had a deep hatred of Catholics especially those who supported the Jacobite cause, which he believed was treasonous and from the outset he pursued them with a vengeance. He was carefully chosen for the task at hand because of his ruthless streak and the fact that he spoke Gaelic fluently and therefore could properly interrogate the locals. 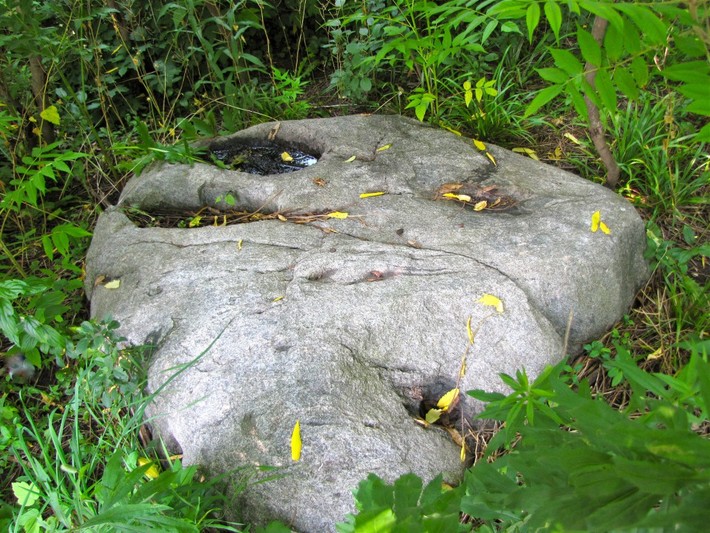 Johnston wasted no time and began his campaign by ordering his Sergeant Wilde and six men, out into the countryside with instructions to destroy the houses, burn the possessions and whip the locals who supported the 'popish pretender.' In Dundalk he had two men beheaded, put their heads on pikes and displayed them on the gates of the jail as a warning to the populace. His fee for that barbarous act was 20 pounds, a huge sum of money at the time and head cutting became a lucrative business for Johnston who pursued it with relish. Johnston was hostile to the Catholics and their religion but he had no love for Englishmen either. When Lord John Kerr's Regiment of Dragoons set up their garrison at the Black Bank Barracks in 1724, Johnston wrote to Dublin Castle: "Thank the Lord at last I have Scottish soldiers instead of those damned English swine, to guard the Fews." Johnston, though a member of the established Protestant Church, was partial to the Presbyterians because of their Scots origins and he encouraged the local landlords to take presbyterian settlers from Down and Antrim onto their estates around Creggan in 1734-5. He evicted the Catholic tenants to make room for the newcomers which resulted in a bitter, bloody feud between the native Irish and the planters, and not long after a new presbyterian meeting house was built, it was burned down.

Johnston soon turned his attention to MacMurphy and his followers and his relentless pursuit of them became an obsession. He targeted Peadar O'Doirnin's school at Kilcurry, razed it to the ground, burned every book and drove O'Doirnin into the hills where he joined up with MacMurphy's men. Johnston described O'Doirnin as "a person ill-disposed to the King, a favourite of the Pretender, who stirs up the people to rebel by his treasonable compositions," a reference to O'Doirnin's poetry. This wanton act of destruction propelled MacMurphy and O'Doirnin into action and in 1744, they organized a meeting on the top of Slieve Gullion and invited all the Catholic clergy, the prominent and more wealthy Catholics, and particularly the poets. It appears that soon after the meeting ended the fuse was lit and an air of open rebellion ensued. When news of the meeting reached Johnston he became incensed and re-doubled his efforts to bring MacMurphy and his 'rapparees' to justice, dead or alive. Bounties were set on their heads and of anyone who ran with them and anyone offering aid and shelter. 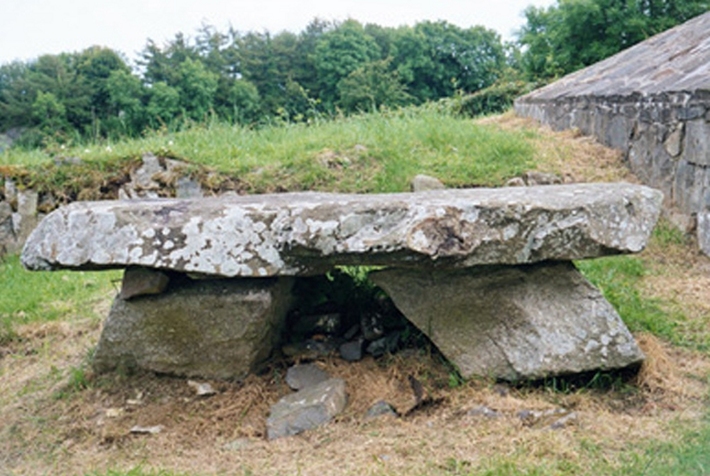 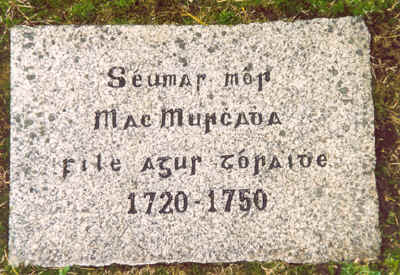 Johnston, Constable of the Fews from 1710 onwards, had his headquarters at the ‘Black Bank Barracks’ at Roxborough, not far from the border of the townland of Aughanduff, and within easy view of it. Just beyond the boundary of the townland, in an old peat bog in an area called Umerican, lies Pulkowen or Pikegowen, a well-known rock outcrop that sits behind old Aughanduff School on Pike's Brae. In Gaelic ‘Iomaire Cam’ means, ‘the crooked ridge’ and has the unique distinction of being the only townland in Ireland with that name.

The outcrop is believed to have been used as a "heading stone" by the Johnston's and their agents in the 1700s and is considered by some to be haunted. Collecting records of the county in the 1930s, local historian T.G.F. Patterson recorded the following with respect to that stone:

"In the old days when the Johnston’s were at Roxborough, this was one of their beheading-stones. And the bloodstains are upon it till this very day, and it's few people would pass it at night because of the ghosts that still linger there. Five pounds a head they had for all that went till Dublin. And the head of many a decent man went up instead of a Tory, and Keenan was worse than the Johnstons.”

Several deeds in the Dublin Registry record the townland being passed between various Ascendancy figures. The earliest of these remaining is that between Abraham and Florina Ball of Darver Castle, County Louth and John Vaughan of Dublin of 11 May 1716. A number of these deeds survive and detail changes in interests in the district between then and its being purchased by its last landlords, the MacGeoughs, in 1803. In 1771, the area's last symbolic ties with O’Hanlon overlordship were severed when Aughanduff, in addition to eleven other townlands, were split from the Parish of Loughgilly (location of Castle O’Hanlon) and united into the newly formed parish of Forkhill. Cormac Keenan was employed as ‘headsman’ for Johnston of the Fews and hunted Priests, Raparees and anyone else suspected of being a supporter of the Jacobite cause. This fervor for the bounty set on each head collected led to both guilty and innocent being butchered. It’s told that he chopped off the head of many a man that was innocent, solely for the money. Keenan was despised more than his employer Johnston which attests to his utter cruelty as Johnston of The Fews was detested and feared by all. Keenan lived in the townland of Tullyvallen but like all men he was only a mortal and had to die like others. It is said that as he lay on his deathbed a drop of blood began to drip from the ceiling down on to his bed.  Every time the position of the bed was changed the blood followed and continued to drip until he died.’ The people of Tullyvallen can still identify the execution rock used by Cormac Keenan.