These compelling essays take a fresh and intuitive look at the broader effects of the disastrous collapse of the food supply in Ireland and the effect this had on Ireland and, in particular, the implications this had for the people, language and culture of Ireland.

Based on newly published research, or on newly informed interpretations of existing research, these four essays have been penned by four influential scholars, all historians in their own right. They have brought to bear new thinking to challenge and inform our understanding of this terrible period in Irish history. Pointedly, they have been written for a broad, general audience rather than just for a narrow academic one.

Speaking about the Famine narrative recently, the President of Ireland, Michael D. Higgins, said: “There is not a single narrative of the Great Irish Famine. It is necessary to revisit, revise and include much that has been forgotten or perhaps deliberately avoided in a great silence amongst the survivors at home and abroad. We must be open to amending what we have taken as the iconic event, the master narrative, and add in some missing bits, drawing on the new scholarship.”

The four Famine Folios authors and their folio / essay titles are;

Michael Foley - Death in Every Paragraph: Journalism and the Great Irish Famine 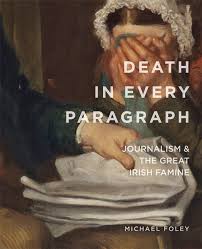 Gearóid Ó Tuathaigh - i mBéal an Bháis: The Great Famine and the Language Shift in Nineteenth-Century Ireland The importance and relevance of these essays becomes clearer in these two paragraphs taken from a news release by Cork University Press, the publisher of these essays:

"Ireland's Great Hunger Museum at Quinnipiac University, which is the brain-child of the University's long-time President, Dr. John L. Lahey, publishes Famine Folios, a unique resource for students, scholars and researchers, as well as general readers, covering many aspects of the Famine in Ireland from 1845-1852 -- the worst demographic catastrophe of nineteenth-century Europe. The essays are interdisciplinary in nature, and make available new research in Famine studies by internationally established scholars in history, art history, cultural theory, philosophy, media history, political economy, literature and music.

"The catastrophe of the Great Irish Famine of 1845-51 is a major watershed in Irish history, with a decisive impact on many aspects of Irish demographic, economic, social and political history. It played a crucial role in shaping the memory and identity of the Irish diaspora, notably in North America and Britain. It is also credited with effecting enduring changes in Irish cultural life.''

These four newly published Famine Folios follow on four earlier essays in the series penned by Luke Gibbons - "Limits of the Visible: Representing The Great Hunger"; Niamh O’Sullivan - "The Tombs of a Departed Race: Illustrations of Ireland's Great Hunger": Christine Kinealy - "Apparitions of Death and Disease: The Great Hunger in Ireland" and Catherine Marshall - "Monuments and Memorials of The Great Famine," all published earlier this year. Six further folios – by, among others, Richard Kearney, Vincent Woods and Fintan O’Toole – are still to come.

I believe that these essays are essential reading for anyone interested in the broader narrative surrounding “An Gorta Mór; the Great Famine of Ireland,” the seminal event of post-modern Irish history.

The books are published by Ireland’s Great Hunger Museum at Quinnipiac University, and are available from the university and from Cork University Press at €11.95 / $15 each. They would make for a lovely stocking-stuffer or Thanksgiving gift for anyone you know that likes to talk Irish history, and that probably includes everyone of us.

Brian Nolan is delighted to hear from anyone interested in Irish history and especially those interested in touring Ireland, where he is available as a personal guide or tour planner. Brian also gives regular tours of his hometown Galway.

Good to hear. It needs to cease being called a Famine - The truth is out there now and the written history about what actually happened needs to be changed or added to as Michael D. Higgins has put forth.

I agree Fran Reddy. It is about time that historians stated to call it what it was " Geniocide " as per the 1948 Human Right's Convention by Francis A. Boyle, Law Professor of the University of Illinois at Urbana-Champaign,"

My first novel just came out last month, and it is set in Ireland in 1846. I did a lot of research for it, and I hope I did the history justice. I would be honored if you would give it a look. Legacy of Hunger, http://www.amazon.com/Legacy-Hunger-Druids-Brooch-Series-ebook/dp/B...