For many decades, the existence of the Great Famine in Belfast was either ignored or denied.  To some extent, this was due to political reasons – a Unionist belief that their Protestant ancestors in the north east of the country were both different and superior to the Catholic majority in the rest of the country. Poverty and famine, therefore, were not part of their history.

To some degree, this myth was validated by a number of Irish scholars who either avoided undertaking research in archives in the north of the country, or reiterated the fallacy that northern Protestants in the nineteenth century did not suffer from the same levels of poverty or hunger as Catholics. This approach was summed up by an eminent historian who had written: "Ulster fared better than the average experience of the island … The Protestant people of that province suffered less severely from famine."  It is only in the last few years that this orthodoxy has been challenged and new research has proved that the poor in Protestant areas, such as Shankill and Ballymacarrett in Belfast, suffered from high levels of hunger, disease and mortality after 1845.

The population of Belfast in the mid-nineteenth century was predominantly Presbyterian. Spatially, the town (it did not become a city until later in the century) was divided, with the many of the poor living in either Protestant or Catholic enclaves.  By the 1840s, Belfast was in the easily stages of industrialization, with the factory production of linen expanding, as rural, domestic production contracted.  Despite the presence of a number of factories, including those serving the linen and the nascent ship-building industries, there existed a large Protestant "under-class" many of whom were poorly paid, economically vulnerable and largely invisible. Although part of a wage economy, their primary diet consisted of potatoes.

The impact of the first failure of the potato crop in 1845 had an immediate impact on the town.  In early November, a meeting was convened in Belfast, which was described in a local newspaper as being, "very large and respectable." During the course of the meeting, the high price of potatoes, which had made them out-of-reach to the local poor, was discussed.  Interestingly, the meeting also appealed to the British government to pass legislation to close the ports, that is, to forbid food from being exported from Ireland during the crisis. The people of Belfast were not the only ones to make this request, but it fell on deaf ears in London, both the Tory and Whig governments being committed to free trade.

The second and more serious failure of the potato crop in 1846 coincided with both a poor corn (wheat, oats, barley) harvest and an economic recession throughout Europe, which was particularly serious in the United Kingdom.  The consequences for Belfast were severe and immediate.  Large-scale unemployment combined with spiraling food prices left many of the poor, from all religions, without the means to obtain food.  By the beginning of 1847, newspapers were reporting that the local institutions set up to provide relief were unable to cope with the demands being placed on them.  In the Protestant community of Ballymacarrett, private soups kitchens had been established which were feeding an estimated 3,000 people a day and the number was growing.  Across the town, in the Catholic district of Smithfield, a private soup kitchen had also been opened.

Despite these efforts, destitution, disease and death stalked the streets of Belfast throughout 1847 and 1848. The local newspapers were reporting daily instances of people being found dead on the streets, while the major cemeteries, including the Catholic Friar’s Bush and the Protestant Shankill graveyards, were complaining of major over-crowding.  Again, the authorities responsible could not cope with the demands being placed on them. A visitor to Shankill recorded, "I turned away in disgust when I observed the manner in which skulls and bones were thrown up."   More unequivocally, Dr. Drew, the leading Anglican clergyman in Belfast, declared that the town’s graveyards were, "shameful to any Christian community."

Belfast, similar to other major towns and cities in Ireland, was further disadvantaged by the influx of poor from the surrounding rural districts into the town. They inevitably put pressure on local relief provision.  They also contributed to the spread of disease, coming into a town in which over-crowding was already rife.  By April 1846, both the General Hospital and the Fever hospital in Belfast were "crowded to over-flowing."  Such conditions exacerbated, rather than alleviated, the spread of disease. 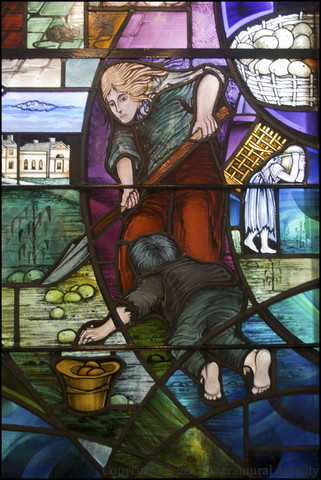 Although the potato crop of 1848 was almost as bad as 1846, a good corn harvest and the inset of industrial recovery meant that parts of the east of Ireland were beginning a slow recovery from the worst impact of the Famine.  Clearly, though, the recovery was not instantaneous. In 1849, for example, the Belfast workhouse was still renting four auxiliary buildings to cope with the demand for relief.  However, a myth was slowing taking shape that the Great Hunger was a Catholic tragedy, and that the northeast of the country had been exempt from suffering. As religious differences polarized in subsequent decades, this narrative became the accepted orthodoxy.

Like Dublin and Cork, Belfast recorded a growth of population between 1841 and 1851, not due to an absence of emigration and mortality, but simply because the poor in the rural districts had sought refuge in larger urban areas.  Moreover, in the late nineteenth century as Belfast developed industrially and became a world leader in shipbuilding, the population of the town continued to increase rapidly. Sadly though, sectarian divisions continued and the Great Hunger was increasingly remembered as being a Catholic tragedy that had not affected the poor of Belfast.  In post-Partition Ireland, this narrative fitted neatly with a Unionist view of Protestant affluence and superiority.

Within Belfast, memorials to the Famine have overwhelmingly been situated in nationalist/Catholic communities and have mostly taken the form of murals, a number of which have already been painted over.  A more permanent memorial, however, exists in the form of a beautiful stained glass window (pictured at left), situated in Belfast City Hall.   The decision to install it in 1996-1997 proved to be controversial and was vehemently opposed by the majority Unionist majority parties.  It was, however, supported by the small Progressive Unionist Party.  This hidden treasure is well worth a visit when in Belfast.

Professor Christine Kinealy is Director of Ireland’s Great Hunger Institute at Quinnipiac University. She and Gerard MacAtasney are authors of "The Hidden Famine. Hunger, Poverty and Sectarianism in Belfast, 184..." (Pluto Press, 2000).  In June 2015, the Institute will host a conference, "Women and the Great Hunger"

I was struck by the tragic beauty of this window on my last visit to Belfast.  Thanks for telling us more about it!

Tony Blair's apology was a weak statement while he ignored the hard facts of all the foods and livestock exported from Ireland by the English while the Irish population starved to death.

Good post. Another factor was that huge numbers of Catholics are believed to have been induced to become Protestants in return for soup - giving rise to the term 'soup Protestants'. Some folks may have lived as Catholics and died as Protestants.

At the start of the Industrialisation of Belfast, and all during the famine years, many Catholics flooded into the town in search of work. The town, having been built by Protestants for Protestants, had little to offer Catholics in terms of work, places of worship and education etc. In order to get on and get one's children schooled, becoming a Protestant was the only option. These circumstances, together with the preaching and proselytising by radical preachers like 'Roaring' Hugh Hanna, also induced a great many Catholics to change their religion.

This persuades me how meaningless it all is to label people.  If there is a God, why would he care which church one is in when praying to him?  A well-written and informative social history of Belfast, and one which I thoroughly enjoyed, is Kevin Johnston's 'In The Shadow of Giants'.

By the way, my Belfast Protestant grandparents are buried in Belfast City Cemetery alongside two small infants of the family, Isabella Florence Kelly and Hugh Kelly, both of whom died from marasmus - a starvation disease.

If you'll forgive me for blowing my own trumpet here, Mary, my own novel 'A Wistful Eye - The Tragedy of a Titanic Shipwright' by DJ Kelly (available in paperback from Amazon or to order from all good books shops) tells the story of my Titanic shipwright great grandfather and his murdered wife, and highlights the working conditions at Harland & Wolff and the living conditions in Belfast's working class districts during the first quarter of the 20th century.

Was your grandmother a Belfast Belle then, Mary?

Just watched your YouTube video, Mary. Yours sounds like a great read too. My grandmother passed away around the same time yours did. Her recollections of Mayo and America made a big impression on me.

DJ Kelly - That whole period was just so appalling  ; Have you signed the petition to stop the BBC4 Channel from making a comedy film out of The  Famine.

I must buy your book . No my Grandmother as born in Wexford

I have indeed signed it, Mary. 'Can't imagine what the BBC are thinking of. What next, a musical based on the Holocaust? I visited Wexford for the first time in 2013. Beautiful place.

Yes I had wondered if the Holocaust had have been suggest as a satirical  programme - how the world would react to that . That one of our own [Dublin born -living in Dublin] script writers could even have considered a commission as gross / terrible as this ; what was he thinking !!!

I just hope that BBC4 have the good grace to admit that they were wrong and drop it .