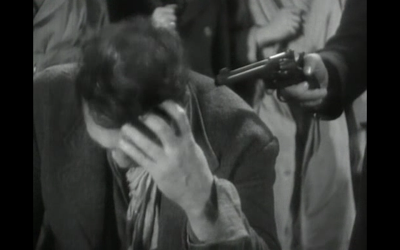 What followed next was a scene that has occurred numerous times when Irish rebels were faced with the question of what to do with an informer. Irish history and literature are replete with references to this scourge of failed rebellions. Liam O' Flaherty's character Gypo Nolan betrayed his former comrade in The Informer. An eerily similar situation to that of Sergeant Michael Hickey was described by Frank O'Connor in his acclaimed short story,” Guests of the Nation," More recently, the matter was dealt with, in the award-winning film "The Wind That Shakes the Barley."

The ill-fated character Gypo Nolan, left, from the 1935 John Ford film 'The Informer'

Read Part 3: The Ambush, 'We Let Them All Go, Except the Policeman'

Volunteer O’Mara stated that after the capture of the sergeant:

Our party consisted of ten or twelve men, halted at Kilgobnet, where the officers held a council of war to

A court martial ensued and “because of his activities in assisting the British to hunt down I.R.A. men he was sentenced
to be shot...” Specifically, Mansfield noted that Hickey “had, apparently, been acting as a spotter for the British raiding party the previous night.” (52) An account written in 1924 noted simply: "Sergeant Hickey was taken away by others up the boreen ... and was never afterwards seen alive". (53) Lennon’s memoir noted “a sharp turn in the by road.” (54) Even more specific was the Deise Brigade engagement report, which pinpointed the shooting of an R.I.C. man:

An ordnance survey map reveals such a “full stop” intersection at Carrowncashlane or Castlequarter. This area is immediately east of Kilgobnet, adjacent to the castle (CAS).

Save for what was written by the column O/C, there are, to the best of my research, no accounts of what actually transpired at the court martial or the firing-squad execution. The larger question of the moral dilemma involved in the ultimate fate of a captured enemy was dealt with in the Lennon play, completed circa 1962. (56)

Without directly naming the participants in the later memoir, he noted that the "partisan officer" (Lennon) anxiously awaited, outside the priest's (Fr. Power) house, the arrival of his flying-column men. When they arrived with the "constabulary sergeant" (Hickey) a “glance of recognition” was exchanged between the two and the officer, perhaps hopefully, stated that "it would be hard for us to release him?" This was a quite understandable response, in that Lennon had known the sergeant since childhood days. Moreover, it had only been days earlier, at the Cappagh train station that Lennon had narrowly avoided capture -- an escape made possible by another childhood R.I.C. acquaintance (Constable Neery), who chose to hurriedly look the other way as the rebel leader exited the first-class compartment of a train containing British military. (57)

A "subordinate officer" replied to the possibility of releasing the prisoner in the following words: 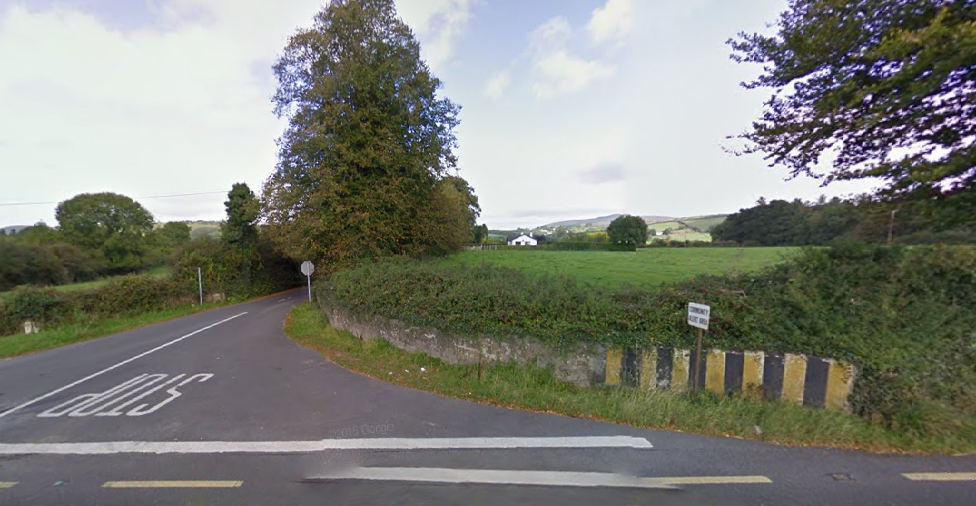 (Above: The road into Kilgobnet, where the Volunteer retreated following the ambush.)

In light of Pat Keating's oft-expressed concern regarding possible reprisals, it may very well have been Pat, or even Jack O’Mara, rather than column vice O/C Mick Mansfield, who so forcefully stated the need to execute the just-turned 36-year-old sergeant. Nonetheless, life was not to be taken lightly as had been evidenced some two weeks earlier, at the Durrow train ambush, when Mansfield had persuasively argued for the release of British sympathiser Charlie Nugent Humble, a civilian. But Hickey was not a civilian or a member of the British military. He was viewed as an Irish traitor by the I.R.A. and as a likely informer who could bring down arrest upon the column men and reprisals on their families and others who were sympathetic to them.

Above, looking toward Ballycoe from the main road (now N-72)

The experience after the Piltown ambush, when freed Constable Prendiville failed to abide by his pledge to leave the R.I.C., made it unlikely that such an opportunity would be afforded Hickey. Earlier shootings of R.I.C. men had demonstrated the willingness of the I.R.A. to move beyond securing promises.

That Hickey was aware of his fate if captured was later suggested in Lennon's play, in which a "Constable Sergeant Dunne" responded to a British officer:

If they take you, they will treat you like an officer and gentleman, but if they capture me they will shoot me like a dog -- like the police spy I am! (59)

His appearance was described:

The police sergeant is a powerfully built man but he seems to have shrunk into his bottle green uniform. He looks by no means ill-natured but his face now has a sallow, yellow tinge and his lips are white. He has a look of the deepest sadness, if not despair. (60)

Called upon by Lennon, Father Power opened his door "with a frightened look" and came “out into the forbidding morning wearing a stole and carrying a prayer book." Instructed to give the sergeant a "full glass of whiskey," he re-entered the house and returned with the spirits. (61)

Lennon then, “not unkindly,” said:

Drink this. The police sergeant takes the glass unsteadily and gets the liquid down in a number of gulps. Then the priest takes him gently by the arm and leads him to his doorstep where they both sit down. The priest places his hand affectionately on the sergeant’s arm and hears his confession. When they have finished, the others wait uneasily for the moments are pregnant. The officer makes a sign and the priest takes the prisoner’s arm to assist him up.

A "glance of understanding and deep affection passes between them.” The sergeant “squared his shoulders” as a bandage is tied over his eyes.  The officer steps back, drops his arm and calls “fire.” The morning silence of the glen is shattered. The dead man sways on his feet an instant, slowly inclines and falls rigidly on his left side, his head amongst the ferns. (64)

Drawing his Luger, Lennon approached the prostrate man, looked down "at the erst-while enemy who is now an enemy no more" and fired into the man's temple.

The priest (Fr. Power) claps his hands before his face and runs back towards his house, his shoulders shaking with sobs. (65)

At sometime around 6 A.M.  (19 March) the column O/C made “a sign to his men and they go quickly off,” while “the police sergeant lies peacefully amongst the withered ferns.” (66)

Read Part Five: “Brave Pat Went Out To Bring Him Back”

55.  Sean and Sile Murphy, The Comeraghs, Gunfire and Civil War

The post mortem revealed 2 bullets in Hickey's  torso  in addition to the  coup de grace administered by my father. Hickey was engaged to a local lass who subsequently  married another former R.I.C. man.  The Burgery Ambush occurred on the night of Hickey's 36th birthday