On the morning of the 19th, George Plunkett, the ranking officer that night, visiting from GHQ, no doubt aware of the withdrawal from Durrow and other engagements due to want of ammunition, recommended a return to the ambush site to secure supplies possibly left from the night action.

Above, the field Plunkett's men had to cross going back toward the Burgery in the morning.

As it was now getting light, “all of the officers were very much against this proposal.” It was argued that the British would be out in strength and that it was simply asking for trouble to approach the Burgery ambush position again. Nonetheless, “Plunkett was determined to go ahead with the idea”. (67)

He set off from Kilgobnet with a party of men which, based on the individual witness statements, included the brigade O/C, the column O/C, Pat Keating, Mick Mansfield, Nipper McCarthy, Sean Fitzgerald, Jim Mansfield, Mick Shalloe, Kelly Donovan, and Jack O'Mara. 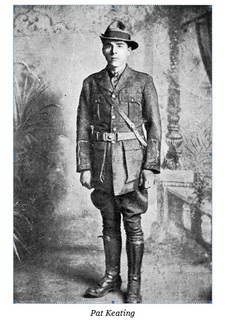 As the men crossed an open field, about 8 a.m., toward the Burgery road, a small group, including Whelan and O’Mara, were “placed in position behind a ditch along by this field.” Another group of men, with Plunkett in charge, advanced.

It soon became obvious that the enemy had seen our men advancing, because when our boys were about midway in the field, heavy rifle fire was opened on them by troops lining the ditch on the Burgery road. (68)

Fitzgerald was shot and Keating, per Plunkett, ”only concerned for his good friend” (69), went to his assistance. As stated in the poem, which begins "down from the Comeragh hills he came”:

Reportedly, per one later account, Keating “dashed back under cover, but returned a second time to get Fitzgerald. He was shot again.” While the witness statements were silent with respect to the matter, such heroism would certainly have been in character for the rebel poet in light of Fitzgerald having returned to Comeragh to join the column upon hearing the rumour of Pat’s death. (71)

Having run out of ammunition, Plunkett secured some from the prostrate Keating and “just as he got a round into the breech and the bolt home,” he saw movement “at the side of the gate-post.” Aiming carefully, “perhaps a bit high in the rush – and fired”. A Black and Tan named Redman “dropped.” (72)

Firing continued for 10 minutes or so, when our lads began to retreat as their position was most dangerous. They eventually got back to where we were stationed.

Plunkett then called for Volunteers to bring back Pat Keating, but Jim Mansfield objected and said it was suicide to attempt to rescue Keating. We pulled out then, but Plunkett and another man, whose name I cannot recall, stayed behind to see what could be done for Keating. (73) The column O/C [Lennon] later “confess(ed) that I did not conduct myself with any great show of bravery.” As to Plunkett, he “behaved with amazing coolness and courage.” He “took over” and, under heavy fire, “crawled over to where Pat Keating lay and carried him on his back to the cover of a fence.” His conduct was reminiscent of his heroism at the Dublin G.P.O. during Easter Week, in 1916. Plunkett, at this point, “had no option but to carry out a ... retreat, ... returning to Kilgobnet.” The retreating men “held their fire all this time so as not to betray our position.” (74)

(Left: A member of the Waterford Volunteers with a Thompson submachine gun.)

The injured Pat, while fully conscious, was carried away by Plunkett and another man of the column. Arriving at the home of an elderly man named Maurice Morrissey, Cumann na mBan member “Birdie” Hanley of Gliddane was contacted and came immediately to the house.

The body of Sean Fitzgerald lay where he had been shot. His body to be taken, in an ass and cart by the British military, to the town square where it was exhibited before being taken to the barracks. The body of Redman was removed between 9-10 a.m. of the same day, the 19th of March.

In retrospect, many years later, Lennon maintained that it was not a mistake to go back “as we badly needed what munitions might have been left behind by the military when they fled." The error was his, he felt, for not having reconnoitered prior to returning. (75)

Retreating "sadly across the grey fields" and "unable to face the fact that Pat Keating was dead," Lennon fell behind the main body of column men. He "was weary, unspeakably unhappy and quite dispirited." He was approached by Plunkett, who slipped his arms into his as they and the column moved off to the hilly country around Kilbrien, just north of Bohadoon. (76)

left us to return to G.H.Q. with his report. As he was fixing his bicycle clips he said coldly that he was recommending that I take responsibility for all activities in the county. As we were still a bit stiff with each other, we did not offer to shake hands. He rode away and soon disappeared around a bend in the road. (77)

Regarding the discovery of the slain sergeant, it was written by Keohan in 1924 that “for two days British military forces scoured the countryside to find him, and it was Mr. Beresford on whose land the body lay that (sic) discovered it lying in the glen” at Castle-quarter. (78)

(Below: The gate where Redman was fatally wounded by Plunkett.) ...the body of Sergeant Hickey R.I.C. has been found. On Saturday evening (the 19th) acting on information received, a lorry of military proceeded to a district called Castlequarter, some two miles from the scene of the ambush and there in a bog they found the dead body of the missing sergeant. On his breast was a card bearing the word “Executed”. His body was riddled with bullets, no less than 14 bullet wounds being counted, some through the back and others through the chest. (79)

The assertion of bullets fired “through [Hickey's] back” was subsequently retracted. In dispute are the date his body was located and the inscription on the card, which was noted by the column O/C as the more likely “police spy.”

Confusion may also exist in the minds of some as to the location of the execution and where the body was found. Keohan’s 1924 book and newspaper accounts from 1921 mention Castlequarter, while I.R.A. eyewitnesses mention a Kilgobnet field. This is readily explained in that Castlequarter is a townland located astride the Dungarvan-Kilgobnet border and is shown on contemporary maps as Carrowncashlane or the “quarter (catharun) of the castle (caislean).” The Castlequarter / Carrowncashlane area includes the area immediately east of Kilgobnet, between Ballyknock Upper and Ballyknock Lower. In this area is the “point in a field at the full stop after CAS," the CAS in the I.R.A. engagement report referring, in all probability, to the adjacent castle. Apparent incontrovertible corroboration is that 231 acres of Carrowncashlane land were, per the listing of County Waterford landowners, in the possession of the Beresfords. (80)

Read Part 6: The Burials, 'To the Hills and Valleys He Loved So Well'