(Left: R.I.C constables and Black and Tans in a Crossley Tender)

Jim Prendergast recalled the attack on the second vehicle:

We were armed with rifles and I had, in addition, one Mills grenade. About 11:30 on the night 18th March 1921, the first British lorry came along ... Lennon, Kirby and Paddy Joe Power opened up on it with rifles and I threw the grenade, which failed to explode. The military drove on for about three hundred yards in the direction of Dungarvan and then stopped. The soldiers then got out and came back (on) the road towards us. We ... opened rifle fire on them. (38)

The men on the seemingly more likely return route, via the Cappoquin (Ballycoe) road, were in position for about an hour when they

heard a bomb explosion and rifle fire coming from the direction of the Burgery. We knew then that Lennon’s party was in contact with the British. We struck across country towards the Burgery. (39)

In the car, in addition to Hickey, was at least one soldier, Lieutenant Griffiths, and, in command of the force, Captain Thomas, O/C of the Buffs Regiment, stationed in Dungarvan. Hearing the shots directed at the lorry by Lennon and his comrades, the motor car pulled up at the Burgery and Thomas instructed the lieutenant to proceed to Dungarvan for reinforcements while his group returned to assist the men in the ambushed military lorry, near Mr. Fives' public house. 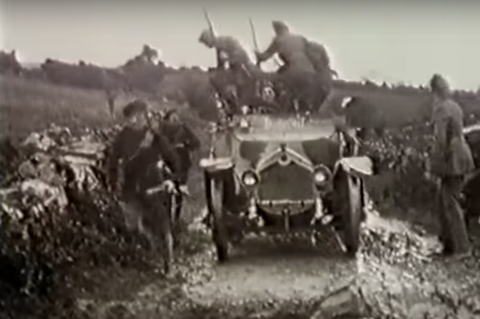 (Right: Black and Tans practicing the unloading of a Crossley Tender under fire.)

The Mansfield party from Ballycoe “came under heavy fire from the enemy” as they crossed the fields “to get out on to the road at the Burgery.” Before reaching the Dungarvan-Waterford Road, they “met Lennon and some of his lads.” Others in this reconstituted group included Plunkett, Shalloe, Prendergast, O’Mara, Fitzgerald and Keating. Hearing the noise of men walking on the road, the Irish ordered them to “halt.” A man with an English accent replied that he was Captain Thomas. (40)

Ignoring the request to surrender, the enemy sought to retreat to the car in the Dungarvan direction. The Volunteers gave chase with “Captain Thomas ... captured and taken prisoner by Plunkett and Lennon.” (41)

Thomas was searched and any documents on him taken. I was strongly in favour of shooting this fellow whom I knew to be a bitter opponent of ours, but Plunkett wouldn’t hear of it. He, Plunkett, extracted a promise from Captain Thomas that, if released, no reprisals would be carried out by the troops under his command. Thomas, too glad to escape the fate he deserved, gave the understanding. (42)

Also captured were Hickey and at least one private from the Buffs regiment. Ambush participant O’Mara believed there were two captured privates of the Buffs, while Prendergast believed there to have been five. All witness accounts are in agreement, however, that Thomas did not escape. In the words of Brigade O/C Pax Whelan: “We let them all go, except the policeman." O’Mara’s witness statement asserts that the captured enemy were brought “to a nearby cottage” where “they were ordered to remain ... until daylight, while Sergeant Hickey was taken away by us.” (43)

With the captured Hickey in tow, the men moved off in the direction of Dungarvan along the Burgery road. Finding a box of grenades on the front seat of the abandoned motorcar, Pat Keating used one to destroy the vehicle.

Meanwhile, Mansfield “and 5 or 6 of the boys,” when they got out on the Burgery road, had “moved after Lennon, Plunkett, O’Meara (sic)” and the others. They only had “gone a short distance down the road” when they “came under fire from British military who had got off the road and were in behind a hedge.” Eventually, the enemy ceased firing “and made their escape in the darkness,” taking with them the prisoner, John Murphy, who was taken to the barracks and, ultimately, Spike Island, County Cork. (44)

“Scattered all over the place” were the unarmed Abbeyside, Dungarvan Company, who had been involved in the demolition work. Rounded up by Mansfield, they were ordered “to disperse to their homes”. (45)

In the darkness “intermittent firing was going on” and it was difficult “to pick out friends from foe as the British Tommies had left their lorries on being attacked and were running helter-skelter through the fields.” (46)

Shooting was going on all over the district. The British were running here and there like cornered rats, shouting and yelling in terror, while our lads “flaked” into them for all they were worth. (47)

In the words of the column O/C:

Impromptu night engagements are likely to have unforeseen results and this one proved to be no exception. In the general melee that followed most of our lads panicked and scattered. The main body of the military lost contact with their officers and retreated in the opposite direction. The night action has been indecisive on all sides. Both the partisans and the enemy soldiers ... got mixed up in the night's darkness and have scattered in all directions. (48)

The men returned to Ballycoe with “a few rifles, some ammunition, a quantity of Mills bombs and a couple of revolvers ... captured from the British."  There, Plunkett directed Nipper McCarthy, Kelly Donovan and Fox Greany to return and burn the Crossley Tender, which had been abandoned by the retreating British. (49)

The lorry destroyed, the men, including Plunkett, Lennon, Keating, O’Mara and others reassembled to the northwest, at the agreed rendezvous at Father Power’s in Kilgobnet. Arriving there “about 2 or 3 a.m.” were the men under Mick Mansfield. The remainder of the column, they later learned, “had moved further to the west into the hilly country in the neighbourhood of Bohadoon.” (50)

Read, Part 4: 'The Erst-While Enemy Who Is Now an Enemy No More'

True but many of the  behaviours, reprisals etc attributed to the Tans were in fact by the Auxies who operated  under the  command  of Brigadier General  Crozier  who  subsequently resigned in protest  re the tactics used. All too frequently one sees photos of Auxies,  w/ their distinctive caps and puttees, mislabeled as Tans. Sadly, as Padraig Og O Ruairic  PhD has noted ,some 25% of the Tans are native Irishmen

Sadly indeed, that our own men could operate in such a manner. What we have to bear in mind however, is that these men 'black and tan' /Auxies were trained under a British Military Department . And more importantly; the Irish were the whipping boys for all British cruelty , meted out over centuries................... So was it learnt behavior, inherent in a daily diet of cruelty meted out to them in the past , or was it their training  that they received when they went sent to war.???

Comment by Joan Dolan on November 8, 2015 at 1:06pm
My father was a little boy of 10-12yrs when Black & Tans shot at him as he crossed a field in Craggaknock, Co Clare. They missed but the family became more wary because they hide guns behind a big breakfront in the main room of their home.
Was in Ireland last year and found the family home. The man who now owns it invited us in. He pointed out the original elements of the house - fireplace lintel from beach south of Spanish Point hooks in rafters for meat curing and the breakfront. I had forgotten the stories about the breakfront and the 1916 stories reminded me.