The Slain Become Pawns — Part 6: Trauma at the Burgery The authorities took Hickey’s remains to the barracks of the Royal Irish Constabulary, in Dungarvan, where the body of Sean Fitzgerald lay. He was duly conveyed, on Tuesday the 22nd, to the new section of the cemetery at St. Mary's Roman Catholic Church, Dungarvan. No civilians, except for Hickey’s brother from Limerick, accompanied the cortege of soldiers and R.I.C. men. Among the latter was his father, who also served in the R.I.C. An order that all shops be closed during the funeral was observed.

Gravediggers initially refused to perform their task. It was only at the instigation of "one of the Catholic Curates" that the grave was dug. The body was interred at St. Mary's because of the generosity and concern of Hickey's fiancée. To this day, his remains lie without a monument in that family plot, nor is his presence noted on the church office's schematic drawing of the burial sites. Knowledge of the exact locale of his grave remains known but to a few. According to a local member of the Waterford Museum in Dungarvan, memories of such troubled times "still linger on in little pockets in Ireland in families . . ." (81)

Read Part 5: 'Brave Pat Went Out To Bring Him Back'

Also not noted on the schematic -- anecdotal and newspaper accounts to the contrary --are the whereabouts of parish members George Crolly Lennon and Ellen Shanahan Lennon, the parents of the column O/C. The parish priest maintains "no records of burials were kept." (82)

Reportedly, Hickey's fiancée never "ever forgave in connection with (his) death." Ironically, her eventual husband, a former R.I.C. constable, became, in later years, a "great friend” of Mick Mansfield. (83)

Having been "removed... with great caution" by the military from in front of the bullet scarred gate, the body of Black and Tan Redman was subsequently returned to Kent, England, for burial. (84)

British army personnel carry the body of a British soldier killed in Ireland back to Britain during the War of Independence.

Although the family of slain Volunteer Sean Fitzgerald made application for his remains, they were not given up until after the Hickey funeral. Later, when Fitzgerald's coffin was removed from St. Mary’s, soldiers with bayonets were posted to keep the crowds back. On the way to Kilrossanty on Wednesday:

The remains were carried on the shoulders of young men from the town, who bore it all the way to the church. They were followed by members of Cumann na mBan (pictured on the march on another occasion),who carried several wreaths of natural flowers. No military or police took part in the funeral. On reaching the church there was an immense gathering of persons. The regulation that only forty persons would be allowed to follow the remains of Fitzgerald was not rigidly enforced. (85) 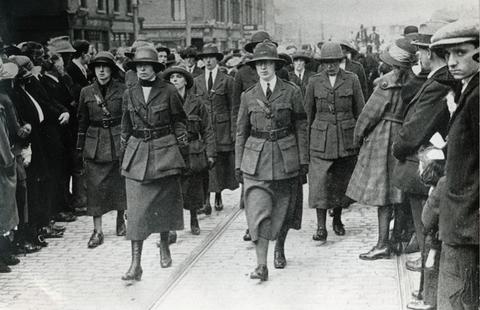 In light of the “wanted dead or alive” status of Pat Keating, the path taken by the mortally wounded Volunteer took a rather indirect route to his ultimate repository in, what is today, the Republican plot in Kilrossanty. Shortly after he had been conveyed to the Morrissey home, Keating had asked if he could be taken to the Whytes at Monarud Townland. Assisted by Mike Heafy, “Birdie” Hanley put Pat into a horse and cart,  "covering him with hay. If they were stopped, the story was they were going to feed cattle. Pat directed them the whole way, even describing the house as being newly plastered on the road side."(86)

Together with Dr. Hackett of Dungarvan, “the Whytes were most kind to him and did everything they could to make him comfortable.” Always most solicitous of others, Pat spoke "about his father and mother and of how heartbroken they would be at the news of his death. He spoke of the bravery of the men of the column and of the great battle that morning and finally to tell Mary Cullinan that he was thinking of her. ...

"Pat knew that he was dying, he asked the Whytes not to let the Black and Tans get his body. ... If Pat’s body was found in the house, severe repercussions would have followed for the Whyte family." (87)

The capture of a wanted man in any house meant imprisonment or worse for all the male members of the household. It meant the destruction of home and property, the unbridled licence of undisciplined gangsterdom. (88)

“Owing to the extent of his wounds and loss of blood, nothing could be done for him,” and Last Rites were administered by Father Power. Death came at five o’clock that evening. Upon his death, per his wishes, the body was moved to a field across the road.

(Pictured, the Republican Plot at Kilrossanty, where Pat Keating's body would eventually be laid to rest.

For the Keating family: To find the body in the corner of a field was a heartbreaking experience. . . . Then there was the panic of not knowing what to do with the body before the Tans arrived and took it away as they surely would knowing of the reward for his capture dead or alive. (89)

The body was laid on a cart for the journey to Kilrossanty school and, for “safety reasons,” it was decided to bury the body that night. His blood-stained uniform was removed and the body was placed in a coffin by Dr. Walsh and nurse Katie Cullinan ("Mother Kent") of Kilmacthomas. On Saturday night the 19th of March, the doctor took the remains in his car to Newtown cemetery, where a grave had been dug in the Cullinan plot. However, by Monday, news of the death and burial had reached Kilmacthomas and it was

decided to have the body removed from Newtown and re-interred in a ploughed field on John Power’s farm in Coumahon. This was a quiet place and the grave would not be noticeable in a freshly ploughed field. . . . The body was taken out of the coffin and Katie Cullinan put on a habit, which had been specially made by the sisters in the Convent of Mercy, Kilmacthomas. The body was then taken to Coumahon and buried that same night. (90)

In the words of the poem:

81.  Munster Express, “Another Day of Tension in Dungarvan” (Saturday,

Very poignant , Cumann na Mbann as per their usual stoicism ; sharing in all that Irish Freedom stood for .