In the early evening they would gather in the grove, beneath the sheltering embrace of the sacred white oak tree. The Master had carefully dowsed the area, and had chosen it for the serene beauty and peaceful aura. The salmon-filled, crystal clear waters of the river wound a course through the center as it made the long journey to its birthplace, the sea. On the west bank, high atop the sacred hill, stood the ‘Stone of Fal, the place where the Kings were crowned, the royal fort encircling the area with its’ thick, safe walls. In the distance, above the east bank, the holy mound of ‘Bru Na Boine’ stood in erect majesty, proclaiming its presence in reserved, silent testimony to their forebears. And so it was, they met there every year at the edge of twilight on the last day in October, to thank their ancestors, the providers, for their bounty. They referred to this day as Samhain, the end of summer and the eve of the New Year. 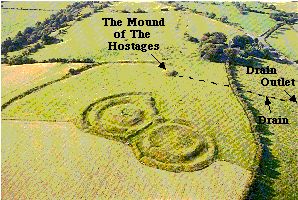 The cool breeze blowing through the dying leaves, caused the long shadows to flit and dance, as if eager to join with them in their joyous festivities. As they waited for him, they reflected on the year that had just passed. It had been fruitful, the crop yields being more abundant than usual. The plantings had germinated earlier than expected, and the oats and barley seemed to have been pushed upward from mother earth by an enthusiastic, unseen hand. The children, ruddy cheeked, were vigorous and never happier, their laughter echoing among the trees.

The Master had said that they needed to grow faster now, and had cast many spells over their heads. There were those among them who swore that they could see and hear the growth, and would look at each other knowingly. The livestock were healthy, and many young had been born in the spring, ensuring plentiful meat and hides for the coming season. It was a good time to be alive and feel a part of it all and now on this night, they would make their way up to the Mound of the Hostages and the celebrations would begin…

Samhain (sow-an) is a Gaelic festival marking the end of the harvest season and the beginning of winter or the "darker half" of the year. Traditionally it is celebrated from sunset on 31 October until sunset on 1 November, which places it about halfway between the autumn equinox and the winter solstice. It is one of the four important Gaelic seasonal festivals, along with Imbolc, Beltane and Lughnasadh.

Samhain is believed to have Celtic pagan origins, and there is evidence it has been an important date since ancient times. The Mound of the Hostages, a Neolithic passage tomb at the Hill of Tara, is aligned with the Samhain sunrise. It is mentioned in some of the earliest Irish literature, and many important events in Irish mythology happen or begin on Samhain. It was the time when cattle were brought back down from the summer pastures and when livestock were slaughtered for the winter. As at Beltane (bal-tana), special bonfires were lit. These were deemed to have protective and cleansing powers and there were many rituals involving flames. Like Beltane, Samhain was seen as a time when the veil between this world and the Otherworld could more easily be crossed. This meant the Aos Sí, the 'spirits' or 'fairies', could more easily come into our world.

At Samhain, it was believed that the Aos Sí needed to be cajoled to ensure that the people and their livestock survived the winter. Offerings of food and drink were left outside for them. The souls of the dead were also thought to revisit their homes seeking hospitality. Feasts were held, where the souls of dead ancestors were summoned to attend and places were set at the table for them. Mumming and guising were part of the festival, and involved people going door to door in costume (or in disguise), often reciting verses in exchange for food.

It is widely believed that many Halloween traditions originated from Celtic harvest festivals which may have pagan roots, particularly the Gaelic festival Samhain, and that this festival was Christianized as Halloween.

From the stone of Fal on Tara high, 'cross the river that flows deep and slow,

the ancients all gather at this holy place to catch the bright morning's warm glow.

In robes of pure white, they walk the ground and wait for the rising sun.

In the heart of the mound, old souls can be found; heaven bound, they then

become one. The Master appears, an unearthly sight, and raises his arms to the sky.

The people bow down, and kneel on the ground, and chant with a joyful cry.

The rays creep across the hills and the glen, and strike the box over the door.

They follow along to the chamber, and then, the love there enshrined, proudly soars.

It has always been done in this very way, and for eons will last evermore.

Their spirits will rise and fly every day, and watch over our true heart's core.

DICK WARNER: Getting to the root of our oak trees

Nice article about the trees Belinda.

As always, the best from JAB.... I researched paganism when I wrote about, The Wake,/ Leprechauns, and the wells in Ireland...What I found was  a similar characteristic in Catholicism, and Samhine [Pagan times] going back further than St Patrick... Many sources would suggest that Catholic tradition, have their roots in paganism. just like the water and the deep underground well, have there roots in Paganism.... Water is the source of Catholic baptism, and all other holy rituals..... I guess we are what we are.... ..

And a good day to all, I believe that the intention of the early Catholic Church was to utilize early dates of celebrations that were pre-Christian to ease their transition from pagan to Christian. Some of the practices were also adopted for the same reason and that they correlated to what the Church was teaching and were not seen as a threat to those teachings. With time we have changed as people, more thin skinned and too concerned about what shows and not much with substance of ideas. Happy Samhain to all !  Slaitne

Mary, the true religion is of the earth and we as inhabitants of it. All invaders try to put their stamp on things. We Irish were fortunate enough to hold on to the roots and not become completely swamped.

Thanks for your thoughts Richard.

That is absolutely true JAB

Thank you as always Mary.