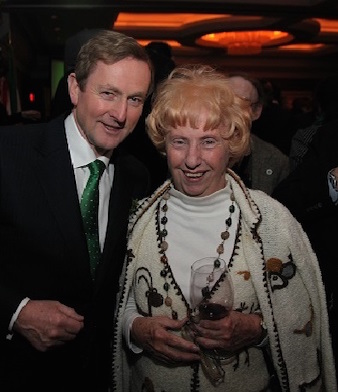 Allow me to introduce myself to The Wild Geese social network.

I am an expert on International and Irish Cuisine.  I am the pioneer of the new Irish cuisine movement dating back to 1960. My work as been acknowledged worldwide and I have been a TV guest on RTE many times and on CBS, NBC, ABC, and Fox in the USA. "Noreen's Irish Soda bread"  is featured in Greg Patent's' "Baking Odyssey" book published in 2007.  This recipe and a write up was featured in the international Hello magazine in 2008 over two pages.  It can also be found on our website.  My books were published by Mercier Press in Ireland between 1977 and 1990 when I moved to live in Florida.  At the request of an American publisher, I am currently writing another book on how the new Irish cuisine movement began and evolved through the last fifty four years. Go to the website and read all about the food scene in Ireland, past and present.

I am the appointed Honorary Culinary Ambassador for Ireland since 1996, when Mr. Matt McNulty, Director General of Bord Fáilte (the Irish Tourism Board) designated this title to me.  I do a lot of work across the USA on behalf of Ireland promoting Irish food.  Yes, Darina Allen of Ballymaloe Cookery School was a student of mine in the days when I ran culinary tours across Ireland during the 1960s, 1970s and 1980s. She started the cookery school in 1983 with her husband.  Her brother Rory was not involved as co-owner or co-starter in those far off days but is listed as such today in place of her husband. Yes, I do know Margaret Johnson and was introduced to her in Florida by Tourism Ireland when she was on tour for St. Patrick's Day some years ago, doing an evening demonstration at Publix supermarket.  I also know just about everyone in Ireland connected to the world of food and colleagues such as Kevin Dundon, a lovely man who runs Dunbrody and is on the Bord Failte Board of Directors. Here is a brief story on how it all began:

From Famine to Feast
Ireland Today – A Gourmet's Paradise

The teenager sat at the table across from her parents and their good friend, who was the best man at their wedding many years previously. Another younger gentleman sat next to the teenager. The conversation was about a ‘Culinary Tour’ of Ireland over the next few days, leaving Dublin that afternoon, after the lunch at the Russell Hotel. The teenager listened intently to her father telling his great friend about the route he had planned, starting in Co. Wicklow. The older man offered some advice about the trip, and the consensus of opinion between the two gentlemen indicated that choices on where to go were very limited. Finally, the teenager interjected.

“Well, I think that Ireland is virgin territory to become a gourmet’s paradise.” She spoke with the authority and knowledge of youth!

Her father’s friend smiled indulgently at the young woman facing him, and with a gesture of gentle laughter and mild skepticism in his voice, he replied.

“Then, why don’t you make it a gourmet’s paradise?”

The young lady was not deterred by the amused tone she heard in his reply. It was not an idle comment, which she had made. Her background from early childhood had involved culinary adventures around the world, thanks to her parents, who were connoisseurs of good food and wine. The ‘Culinary Arts’, a phrase she used whenever she spoke of her interest in good food, played a major part in her life. And, her passport already listed her Profession as Gourmet. She knew what she wanted to do, and had already begun a lifelong culinary odyssey.

The year was 1960. I was the teenager at that momentous luncheon in Dublin. The older gentleman seated across from me at the table was Dr. T.J. ‘Tim’ O’Driscoll, Director General of Bord Failte, the Irish Tourist Board (1956-1971).

You can contact me via email.  I live in Florida and return to Ireland annually for a visit.

Many thanks to you for blazing the trail... I have had some of my best meals in some interesting locales throughout Ireland