Brigit: The Goddess Who Became a Woman, and a Saint In Part 3 of WG's 3-part series "When the Goddess Ruled," Ronnie Drew-Kopp explains why Brigit remains a uniquely Irish figurehead, with a legacy of both Goddess and Christian saint.

Part 1: The Mists of Time
Part 2: Her Name is Sheela
Part 3: Brigit: The Goddess who became a woman, who became a saint,...

She is eternal: The Exalted One.  Goddess, saint, pagan, Christian, Brighid, Brig, Brigantia, Bride, Anam Cara.  We know her as Brigit.  In all of her incarnations, she is a woman of power for Ireland and for the world.

The Goddess Brigit came out of a time of pure light when the sun was worshipped as feminine.  She came from a time before solar worship came to be associated with male gods, before the Feminine was relegated to the dark nether regions.  Brigit was the daughter of the Dagda (the Good God) and related to the great Goddess Dana, the mother of all the gods.  She came with the Tuatha de Danaan, the people of the gods of Dana as a woman of poetry, healing, law, smith’s work, and fire.  Her name was Breo-saighit, a fiery arrow.  When her son was killed in an unfair war of divine politics, she shrieked and cried, thus introducing keening.  She was, at once, a triple Goddess and the amalgam of all the ancient Celtic Goddesses.  After all, the name Brigit is actually a title meaning “Exalted One.”

Brigit’s feast day was Imbolc, celebrated on or close to February 1st, marking the end of the darkness and the coming of the light and Spring, the mating of livestock, the planting of crops, human fertility, and the re-emergence of new and abundant life.  It is no accident that the word Imbolc means “milking.”  Brigit and the land were one and the same and she was worshipped in the landscape, oak groves and holy wells across Ireland.  Her priestesses tended her holy and eternal flame in exclusively female sanctuaries such as Cill Dara (Kildare).  In the early days of Christianity in Ireland, the Goddess Brigit became the miracle-working Brigit who shares many of her attributes and talents with her ancient sister, the Goddess.  Whatever the Goddess could do, St. Brigit could do better.

It is hard to know St. Brigit in any concrete way because she did not leave any writing behind, although we do have her sacred fire, her many wells, and six colorful biographies outlining her life, personality, and spectacular miracles.  Nonetheless, it is fairly certain that she was born around the year 450 C.E. and died at Kildare in 525 C.E.  Initially, her body was interred in a magnificent shrine in her Cathedral Church in Kildare, but was later said to have been transferred to Downpatrick and re-interred with the remains of Patrick and Columba.  With them, she ranks as one of the trinity of revered saints of Ireland.  Although she is claimed by the Church as a Christian saint, she is the bridge between the older matrifocal (or female/feminine Goddess-centered) nature religion and the new religion.  One legend records she was born in the doorway, literally on the threshold, of a house belonging to a Druid, demonstrating that she was born on the threshold of two religious traditions and on a boundary or a thin place between the worlds. 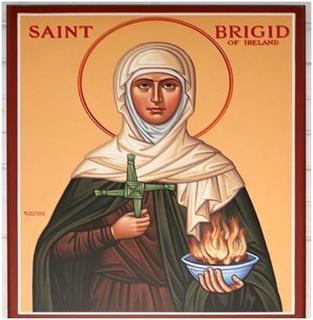 (Right, a modern icon of St. Brigit of Kildare with her cross and sacred fire.)

Brigit’s miracles often illustrate her unbounded generosity and hospitality and are associated with food, drink, animals, and healing. As a very young child, the neighbors observed Brigit’s house was on fire.  Running to her aid, they discover her sleeping in her bed with everything as it should be.  In obedience to God, she gives away milk and butter to the poor and to passersby.  Fearful of her mother’s anger, she prays to God, who miraculously replaces the butter.  In a related story, Brigit is cooking pork in a cauldron for guests but gives it away to a hungry dog.  However, when dinner time arrives, she removes the pork from the pot and finds it whole.  She constantly heals the blind, dumb, lepers and the possessed, and turns water into milk or ale.  On encountering an obese man, her prayers cause him to go on a permanent diet.  One charming story relates Brigit getting soaked in a downpour.  Mistaking a sun beam for a wood beam, she hangs her wet clothing on a mere sun beam where the clothes remain suspended.  Still a young woman, her parents wanted her to marry but she refused wanting to offer herself to God as a chaste virgin.

Brigit makes her way to Bishop Mel in order to take the veil and become a nun; however, Bishop Mel is overcome with the grace of God and miraculously consecrates Brigit a bishop!  Bishop Mel went on to insist that Brigit’s successors would retain all the honor due a bishop.  It is clear that Brigit’s foundation of monks, nuns and other assorted clergy and lay people at Kildare incorporated the sacred fire of the Goddess Brigit where it was tended until extinguished in 1220 C.E. by the Bishop of Dublin.  She was uniquely powerful during her lifetime, Kildare exercising primacy over all the nuns of Ireland, and Ireland being divided between Patrick and Brigit.  She even transcended time and space.

Perhaps the most amazing myth about Brigit is that she was the midwife at Jesus’ birth, providing one of many explanations for St. Brigit’s famous lopsided cross.  It is said that she picked up straw from the manger and wove her cross from that.  She is also called Jesus’ forster-mother and, interestingly, his mother.  Perhaps this comes from the fact that one of Brigit’s titles was “Mary of the Gaels.”  She was also famous for promoting the Anam Cara or soul friend.

The story is told that one day Brigit was alone with a young monk who was also her foster son, and she observed that he had no head for his soul friend had died, and anyone without a soul friend is like a body without a head.  She understood the importance of spiritual relationships while building countless churches and establishing religious communities across the face of Ireland.  She wielded the authority of a woman-bishop and disregarded or defied the laws regarding women and boundaries.  She would simply get into her chariot and go where she pleased, interceding on behalf of all who asked and performing miracles along the way.  The land of Ireland was her sacred space and remains so today in the traditions of Imbolc or St. Brigit’s Day.

Although many of her traditions are forgotten in contemporary post-modern and increasingly secular culture, even modern people continue to seek her out at her holy wells which still dot the Irish landscape.  Although the patriarchal Church tried to suppress the Divine Feminine, Saint Brigit still survives in the very land itself and, while the Church tried to make her subordinate to Patrick and extinguish her sacred fire, she would not be driven out or tamed.  On February 1st, 1807, the Bishop of Kildare and Leighlin (Anglican), restored the Sisterhood of St. Brigid of Kildare, where the nuns continue to tend a sacred flame, pray, run a center for Celtic Spirituality and work for peace, justice, and reconciliation.

More than anything, she still has the power to empower women and gives us, yet today, the gift of Anam Cara, the soul friend.  She is an embodiment of the continuity of the creative Divine Feminine and Holy Wisdom patriarchy has never managed to completely silence or eliminate: the Holy Woman, the Exalted One.  She is eternal. WG

About the Author:  Ronnie T. Stout-Kopp is an Episcopal priest in the Diocese of Newark, New Jersey, and an adjunct professor at Drew University, teaching humanism in the doctoral Medical Humanities Department.

Copyright © 2012 by Ronnie T. Stout-Kopp and GAR Media LLC. This article may not be resold, reprinted, or redistributed without prior permission from the author. Direct questions about permissions to permissions@garmedia.com.

I have long been one of her devotees. I make a pilgrimage to her shrines and wells every time I am home. I host a feast on or close to February 1 each year.  Well written and easily read articles such as this one help keep her fire burning. Go raibh mil maith agat for the posting here