"Jack Tar" was a common English term originally used to refer to seamen of the Merchant or Royal Navy, particularly during the period of the British Empire. By World War I the term was used as a nickname for those in the U.S. Navy. Both members of the public and seafarers themselves made use of the name in identifying those who went to sea. It was not used as an offensive term and sailors were happy to use the term to label themselves. 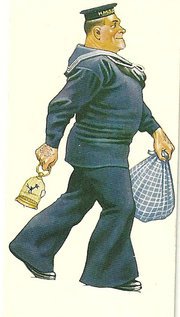 There are several plausible etymologies for the reference to "tar."

Seamen were known to "tar" their clothes before departing on voyages, in order to make them waterproof, before the invention of waterproof fabrics. Later, they frequently wore coats and hats made from a waterproof fabric called tarpaulin. This may have been shortened to "tar" at some point.

It was common amongst seamen to fat their long hair into a ponytail and smear it with high-grade tar to prevent it getting caught in the ship's equipment. In the age of wooden sailing vessels, a ship's rigging was rope made of hemp, which would rot quickly in such a damp environment. To avoid this, the ropes and cables of the standing rig were soaked in tar, which had to be replenished by tarring.

Read more about occupations gone by the wayside:

Thanks for this research, Dee. I'm intrigued by the poster, and its reference to those would-be protectors "against the attempts of all Republicans and Levellers ..." along with other, ahem, colorful references. Is there a date of publication of this poster? The reference to Levellers brings to mind the Parliamentarians in the English Civil War. The term Republicans is then particularly intriguing as I'm not familiar with its use until much later.

I would imagine the poster is referring to the French Republicans - those who 'would murder our gracious king, as they have done their own'. Of course the English had already committed regicide before the French thought of it, so the poster is a little hypocritical.

Rope ends were always heavily soaked in tar to stop them fraying. When those ropes snapped and were sent for recycling, the ends, which with the tar and salt water would then be as hard as policemen's wooden truncheons, would be cut off. These rope ends would be sent to work houses and prisons for the inmates to spend all day unpicking and working into soft, silky strands. The inmates' fingers would bleed and blister from this hard work but they had to unpick around four and a half pounds of oakum or tow, as it was known, a day.

The oakum would be sent to the shipyards and used, along with more hot pitch, to caulk(ie waterproof the seams in)  the wooden ships. This gave rise to the old expression 'money for old rope'.  My Belfast great grandfather worked an Harland & Wolff and had experience of both caulking ships and picking oakum.