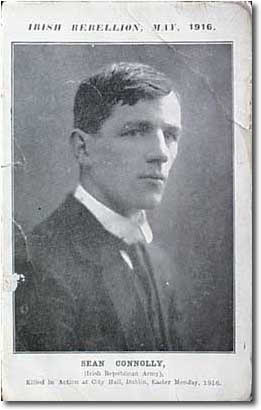 Sean Connolly was born in Sandymount, Dublin in 1883.  His family had been driven off their land during the Land League era.  Connolly and all his siblings were steeped in nationalism and all that Fenianism stood for.  When his father, a sailor, left his seafaring job, he was employed on the docks in Dublin.  The family moved to the inner city when Sean was only a few months old.  He was educated at the Convent School on North William Street before moving to St. Joseph’s Christian Brothers.  He was an enthusiastic student, and he excelled in the Irish Language and Irish History.

He worked as a clerk for Eason’s in Middle Abbey Street, but his true passion was the theatre.  He became an elocutionist in the oral and written word of the Irish language.  It has been noted that Sean Connolly epitomised all the various strands of a revolutionary, excelling in all the cultural aspects of Irish history.  He was an actor, an accomplished singer, and a footballer and hurler.  He played both sports with the same dedication he had given to all his projects.  Connolly was a member of the Gaelic League and the Irish Citizen Army as well as having  a lifelong commitment to the workers movement and all things that involved nationalistic pride in Ireland.  He gave all his money from acting and writing to the cause of Irish freedom.

He was offered a five-year contract in the USA shortly before the Easter Rising but turned it down.  He said: "My country may need me before the five years are up."  His determination, enthusiasm, and intelligence saw him rise to become a Captain in The Irish Citizen Army within a very short space of time.

In the weeks prior to the Easter Rising of 1916, he was playing the lead role at Liberty Hall in Dublin.  The play, which was appropriately named "Under Which Flag," was written and produced by James Connolly (no relation).  The play was about an Irishman torn between serving in the Irish and British armies.  The play ended with Sean Connolly raising the green flag and uttering the immortal lines, "Under this flag only will I serve; under this flag, if need be, only will I die."

On that fateful Easter Monday morning, the 24th of April 1916, Sean Connolly led out the 2nd company of The Irish Citizen Army -- ten men and ten women.  Included in his ranks were his three brothers, George, Eamonn, and Matthew as well as his sister, Kathleen.  Another brother, Joseph, fought under Michael Mallin who was based at St. Stephen's Green.  Under Connolly’s leadership, the Irish Citizen Army entered Dublin Castle.  A detachment occupied Kingsbridge Station (now Heuston Station) as the British soldiers were expected back from Fairyhouse Races.  The 2nd Company of the Irish Citizen troops remit was to impede the British troops for as long as possible to allow the General Post Office troops to gain the momentum. It was Connolly who led the group that entered Dublin Castle.  Different opinions in historical records suggest it was he who fired the first shot killing a British soldier.  Other opinions suggest that it was one of his men who fired that shot.  Regardless, the first casualty of the Easter Rising of 1916 was a Royal Irish Constabulary soldier.  Connolly deeply regretted this death and was heard to say so by his men. Because he worked at City Hall, Connolly had a key to the doors thereof.  He ordered his men to take up a position at City Hall. While attempting to hoist the very same green flag on top of the City Hall dome that he had used in the appropriately named play "Under Which flag," he was shot dead.

It has been said that the bullet “sent into eternity one of the noblest and most idealistic of the leaders of the Rising."  After the Rising when all the rebels had been caught or executed - it was on the 16th May his remains were disinterred at King George’s Gardens, Dublin Castle.  He was then buried in Glasnevin Cemetery on the 19th of May.  The only mourners at the interment were his wife, a few women, and his son, Kevin, who was only three and one half years old at the time.  His father, his brothers, and all his relations were in prison or in hiding at the time.

Who was the first man shot that day?
The player Connolly,
Close to the City Hall he died
Carriage and voice had he.
He lacked those years that go with skill,
But later might have been
A famous, a brilliant figure,
Before the painted scene!