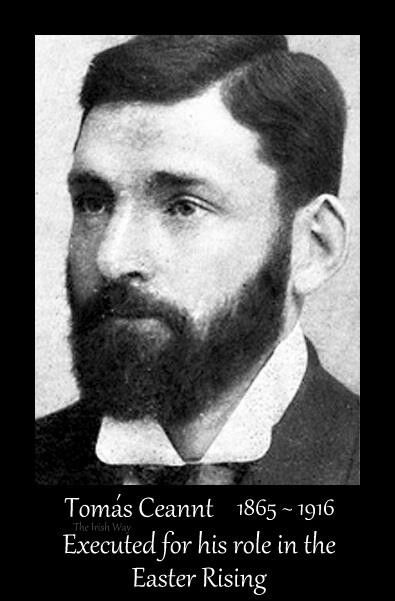 Thomas Kent was born in Bawnard House Castleyons Co Cork 1865-1916 . He is one the very least know of the 1916 Easter RisngVolunteer’s  who shares the dubious honour of being one of two men executed for their part in the 1916 Easter Rising -although he did not take part in the Easter Rising. He and his family were very much a part of the Irish Volunteers and the Gáelic League   The other  man who was a volunteer was  Roger Casement.

Thomas Kent’s whole family were well known and had a long tradition for fighting any injustices suffered by small farmers – particularly during the Land War. It was not unusual for any member of the Kent Family to be gaoled as they a reputation for being Fenians [proud prominent nationalist family] and so they were constantly being monitored and any misdemeanour by them was as an act Fenianism and therefore Gaol was the answer to all of this.

The whole Kent Family were supporters of the Irish Republican Military Brotherhood and all were steeped in the traditions of Irish culture and language. Thomas was also a member of The Irish Volunteer’s and the Gáelic League .

When Thomas was 19 years of age he emigrated to Boston where he found work as a Church furniture maker. He was forced to return home when his health declined. On his return it was not long before he was arrested and spent time in Gaol for agitation.  The Kent brothers were known agitators. So it was no surprise that they held an anti- recruitment platform for British Army recruitment at the same time as John Redmond [the recruiting British Army Sergeant] in Dungourney. The whole Kent family and the Volunteers / the GAA marched through Redmond’s meeting holding their Hurley’s on their shoulders in an imitation of rifles. That evening recruitment was high as the volunteer’s formed the Irish Volunteers company in Dongourney . Unsurprisingly, the brothers were arrested a few weeks later, but they were acquitted due to lack of evidence. That did not stop the Police. A few weeks later they raided the Kent’s home and found weapons and armoury. Thomas was found guilty and gaoled for two months.

So once again it is no surprise to learn that the Kent family had planned to travel to Dublin to be a part of the Rising. However, it is a matter of historical record that due to certain high ranking volunteers unwilling to partake in the original planned Rising, mobilisation orders were cancelled and Volunteers were told to stand down. However, as it has now become known in history, Patrick Pearse and some of his colleagues were determined to continue with their plans and went ahead with the Easter Rising despite all the controversy.

These new orders to continue the planned Easter Rising did not reach the Kent family in time. They had cancelled all plans to travel to Dublin for the original planned Rising and were totally unaware of history unfolding in Dublin.

They were still waiting for the orders to be mobilized when, unknown to the Kent family, the British Army had ordered all known Volunteers, Irish Republican Brotherhood, Sinn Féin members and all known sympathizers  to be arrested throughout Ireland .

Naturally, the Kent family, Thomas; Richard, David and William and their mother Mrs Kent, were on the Police radar and they were raided at dawn on the 02.May 1916. The Police called for the whole family to come of their home. In response Thomas called out that ‘they were soldiers of the Irish Republic and would not surrender.' A fierce battle between the Kent family, the Police and some of the British Army who had been called to assist followed. After three hours the Kent’s family ammunition ran out. They fought until the end, surrendering when they had no other choice. Richard Kent who had suffered with Mental Health Problems tried to escape because he did not want to go back to prison. He was mown down in a fusillade of RIC rifle fire and died two days later .One of the Royal Irish Constables [RIC] was also shot and died and David Kent lost two finger in the gun battle.

Thomas and William were  court martialed in Cork on the charges of armed rebellion. William was acquitted.David was brought to Dublin where he too was court martialed and received the death sentence. However, for reasons unknown his sentence was commuted and he then served a five year penal servitude.

Apart from the singular case of Roger Casement, Thomas Kent was the only other person outside of Dublin to be executed for his role in the Easter Rising. Even though he was not there, his intention was that he should have been, and in addition to that he was charged with the Royal Irish Constables murder.

He was shot by firing squad on the 9th May 1916. He is buried in the grounds of Cork Prison [formally the Military Detention Barracks] at the rear of Collins Barracks [formally Victoria Barracks]

There are numerous memorials to Thomas and all the Kent family in Cork .