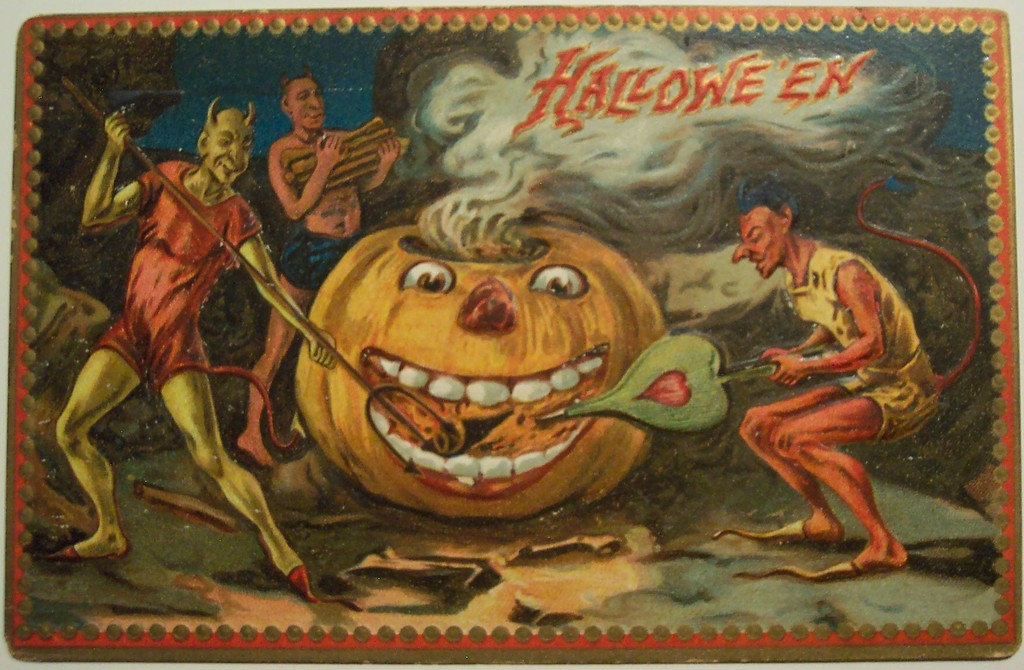 May I respectfully add my take on the feast of Halloween?  Like their economy which was based on planting, growing and harvesting, the Celtic calendar was centered around the Sun and agriculture and determined by a lunar calendar.  The four major feasts were Imbolc on February 1 which introduced the season of planting; Bealtine (BAL-tinna) on May 1 which honored the god of cattle and crops and was associated with growth; Lughnasad (LOO-na-sid) on August 1 which signaled the harvest; and the most important feast of the year: Samhain (SAH-win), celebrated on November 1, when the full moon rose midway between the Autumnal Equinox and Winter Solstice.  It was the Celtic New Year, but it was celebrated for an entirely different reason than we celebrate our New Year today.

Samhain observed the death of one pastoral year and the beginning of another.  To the Celts, winter was coming, crops were dying, days were growing shorter, and the specter of death hung heavy in the air.  It was a time when some of the elderly members of the clan, unable to survive the winter, would be taken from them by Cailleach, the goddess of death.  The Celts marked the 3-day full moon period with activity and ritual before facing the unknown as the strength  of the sun began to wane and fall under the growing power of the gods of darkness, winter, and the underworld.  Cattle were slaughtered and salted to feed the people through the coming winter.  Crops were gathered in and stored lest the shape-shifting Pooka, a nocturnal hobgoblin that delights in tormenting mortals, destroy the fruits of the field and bring on a season of famine. Consumed with fear that they might be carted away to the land of the dead, the Irish lit huge bonfires to ward off evil forces and to encourage the return of the sun.  The real reason for the celebration however, was the fact that Oiche Samhain (EE-ha SOW-na), or the eve of Samhain had passed for another 12 months, for Oiche Samhain was a dangerous night indeed.  It was on that night that the veil between the natural and supernatural worlds was lowered, and residents of the underworld, both good and evil, were free to roam the earth.  It was the holiday of the dead and the sidh (shee) – the supernatural residents of the fairy kingdom, both fun-loving and fearful.  It was a time sacred to the moon, and called for sacrifices to Crom Cruagh, Lord of the Mound, a golden idol surrounded by 12 stones on the plain of Moy Slecht in Cavan.

Any who wandered out that night were in danger of being accosted by spirits, so most remained indoors.  However, if one had to go out, he or she was advised to wear the skin of a sacrificed animal to disguise themselves from the spirits.  If an animal skin was not available, then the traveler would be wise to carry a candle in a hollowed-out turnip so that they would be mistaken for a sheerie or Will-o-the-Wisp and be left alone.  In reality, the sheerie was the normal decomposition of buried organic matter causes methane gas to rise from the bog and burst into spontaneous flame in the presence of air, inspiring many stories of male spirits (Jack) seeking to lure one into a swampy area and harm.

Those who remained indoors listened to seanachies (SHAN-a-kees) or storytellers relate how the Gaels had defeated Ireland’s early settlers, the magical Tuatha De Danann, and won control of the land.  However, the undaunted De Danann plagued their conquerors with trickery, depriving them of milk and grain, until a compromise was finally reached and the land was divided between them.  The Gaels won the right to live above ground and the magical De Danann agreed to live underground, beneath the hills and mountains, becoming the Fairy Folk of Irish legend.

On Samhain, the veil between the two worlds is lowered and the fairies and spirits are free to roam at will.  The mounds marking the entries to dwelling places of the Sidh glowed with eerie light.  Many a mortal was lured away to investigate, but in spite of the temptation the curious are cautioned, if you must venture out, be wary.  You might hear music; the most beautiful music ever to come from fiddle or flute, but do not investigate, for the spirits will entice you away to the dance and keep you entertained until the dawn breaks; then you will be trapped behind the veil!  Tales are told of those lost to the Fairy kingdom who were not seen again until the following year when the veil was lowered once more and they were seen on the other side.  Some have been enticed back to tell their stories, but they were very few and usually came to a violent end shortly after their return.  This was Feile Na Marbh (FAY-luh na MAR-ve) – the Feast of the Dead.  Children born that night are blessed with ‘double sight’ and are able to see and play with the fairies.  Long-dead ancestors also roam the land seeking the warmth of a hearth fire and communion with the living.  Those who wish to welcome them place candles in their window to light the way for their lost souls. With so many things to fear, the obvious question is why would anyone venture out at all and the answer lies in the very same lowering of the veil.  It’s a night when supernatural things are possible; when hidden things are visible; and if one knows how to read the signs, a night when the future can be read for omens are clearest on Oiche Samhain.  If, for example, a maiden were to wash her dress in a stream on that night and hang it on a bush to dry, the image of her future husband will gradually appear beside it.  It’s also a time when you can catch a glimpse of recently-departed loved ones and perhaps secure some information from them – like where did they hide the money!

Another custom associated with Oiche Samhain was the leaving of food and drink on a doorstep to appease the wandering spirits so that they would trespass no further into a dwelling.  If the offering was gone in the morning, it was a good sign that the spirits had accepted it, for no mortal man would dare steal a gift left for the dead.  It was also a fortunate time for the hungry and homeless who wandered the roads and were willing to take that chance.  Needless to say, there was great rejoicing when dawn broke and the threat of Oiche Samhain had passed for another 12 months.  The fear and the celebration associated with Samhain made it one of the hardest of the old Druidic feasts for the young Irish Church to dispel in the early centuries of Christianity, so it was decided to sanctify its meaning. In 432 A.D., Saint Patrick brought Christianity to Ireland, but the old ways persisted.  Rome attempted to take the easy way out and absorbed the tradition into its own calendar.  For centuries, the Church had honored its martyrs and saints on May 13, so in 844 A.D. Pope Gregory IV transferred the saints’ feast to November 1, renaming it All Hallows Day.  Yet, 500 years later, Celtic descendants were still commemorating their 3-day New Year Feast of the Dead.  In the 14th century, Rome decreed November 2 would be known as All Souls Day and masses would be said for the departed who had not yet been admitted to heaven.  In an effort to finally eradicate the ancient festival, October 31 was titled All Hallows Eve and installed on the Church calendar as a vigil of preparation for the 2-day religious observance.

Henceforth, November 1 would be All Hallows Day – a day to honor the souls that had achieved heaven, followed by All Souls Day, a time to pray for the deceased who were still awaiting redemption.  To the Irish however, All Hallows evening retained the connotation of a time dedicated to the spirits and many of the ancient customs lived on.  In time, the Christian meaning became accepted, at least on the surface.  In many areas, the parish priest was given a polite nod of the head in acquiescence to the Church's definition, while a wink of the eye signified that the ancient traditions were still being observed – just in case.

Stories of witches, goblins, and little people persisted, and the cautions proscribed as protection against the spirits of the netherworld remained as All Hallows Evening became Hallows e’en or Halloween – the only Celtic feast still observed on the modern calendar.  Costumes are still much in evidence only they are the dime store variety instead of animal skins; pumpkins have replaced turnips as the Jack o Lantern; and the token food or candy given to visiting ghosts and goblins, who shout Trick or Treat, is a reminder of the food and drink freely given as a ransom against harm.  I'd say the spirit of the occasion (no pun intended) is still intact.  In recent years, a heightened awareness of the origins of Halloween has led to Celtic New Year celebrations in some areas, but there are still many who are not aware of the rich cultural heritage of our ancestors, who based their pastoral activities on a sophisticated celestial calendar fostered by a knowledge of astronomy unsurpassed in their time.

As for the traditions associated with Halloween, well, think about it.  What happens after the demons in the dime-store costumes are tucked safely in bed with their treasure of candy bars and pennies secure in plastic pumpkins?  What happens late at night when the streets are silent; what are those strange sounds carried on the wind each year; and what of the eerie occurrences reported each Halloween.  Of all the Celtic feasts, why is it that only Oiche Samhain has survived.  Is it because there is some substance to it after all.  I can't say for certain, but I know I'm staying at home.  And if you must go out, please, whatever you do, be careful . . . and, by the way, Happy New Year!

In a way, Samhain is my Christmas... and the best of the hours are those in the quiet of the night... when the ancients share their stories and are free to roam about

Great stuff, Mike.  In the Hallow'een of my Irish childhood this was a fun time.  My Mother always made a Barmbrack cake filled with tiny surprises baked inside. That was a great treat.  We did not dress up but did play some silly tricks on neighbors, i.e. a string of thread attached to a door knocker and pulled by the string while we lay hidden inside a bush or tree close by.  Of course, the elders played along having once done the same trick in their youth. Other that simple foods and lots of dunking for apples Hallow'een was simple family fun.  Who else remembers these simple times?