Coming down Broadway in upper Manhattan, four people flagged me down. Three jumped in the back and one into the front, never a good plan from the perspective of the driver. The passenger in the front said: “Can you hurry up and get to Times Square?” and promised to take care of me when we arrived –- a sure sign of a bad tip. On the way down to Crime Square, as it was known by cabbies back then, I asked him what the hurry was. He told me that it was the birthday of one of the passengers in the back, and they had rented out the sign in Times Square to celebrate.

Times Square looked very differently in 1983 than it does today, now with every inch of the crossroads of the world covered by HD screens. There was only one large screen, and everyone who passed through Times Square automatically looked at it. The passenger had bought time on the screen and arranged to have “Happy Birthday” flashing for his friend. That gave me the idea: if the space on the sign can be hired to say happy birthday to friends, why not use it to send a message to Irish Republican prisoners?

I started approaching members of Irish Northern Aid, the support group in America that assisted family members of Irish Republican prisoners in Ireland. I went to Nor-Aid meetings, pitching my idea of renting out the sign in Times Square. The price was $2,000.00. Some people thought I was crazy, but more were intrigued by the idea. But even those who agreed were reluctant to use the money for a sign, instead of sending it to prisoners’ families.

Undaunted, I started going to the Irish bars in the Bronx and Queens, and asked people to chip in. When I got to the magic number, I put on my best and only suit and headed down to One Times Square, Suite 420, the office of Spectacolor Inc., in Times Square, which managed the sign. I met with owner and made my pitch, saying that I wanted to send Season’s Greetings to Irish people around the world, but leaving out the salient detail that those Irish people were Irish political prisoners in prison in America, Ireland and England. He said “no problem,” and all I had to do was get him the graphics.

Only one person in New York – the world, actually -- who could design this, and that was my good friend Brian Mor Ó Baoighill. Big Bernie, as he was known, was the cartoonist for the Irish People Newspaper. Bernie’s talent was a huge as his political convictions, heart, and sheer size. Born in Manhattan and raised in the South Bronx, but always keeping one foot in Donegal, Bernie was living in Throgs Neck at the time. So I headed up to the Neck, and explained to Big Bernie that we needed something exactly 27 seconds in length that would convey our message about Irish political prisoners. He was immediately in. This ad would run every 12 minutes from 8am until midnight, and 1.8 million people would see it. So, working all night, he came up with the concept and drawings and I took them down to Times Square. 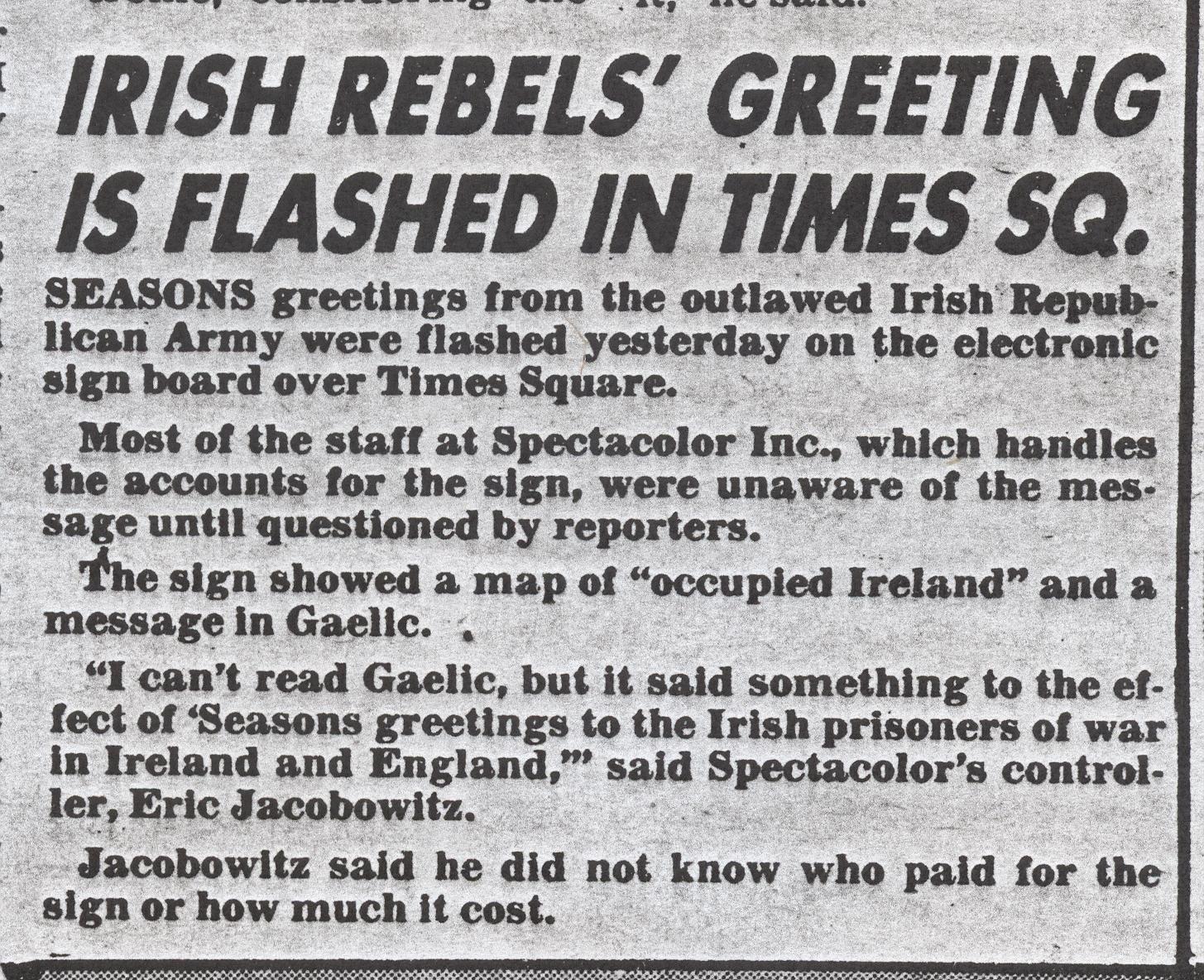 There I met with Spectacolor’s graphic artist, and he set it up. On Dec 16, 1983, Brian Mor Ó Baoighill and I landed in Times Square before 8am -- no easy feat -- to see if this was going to happen. We both believed that someone in management would flag the sign and pull the ad. By 10 minutes after 8 we were ready to give up, but suddenly saw the ad flash across the screen. We couldn’t believe it. This was the start to a very long day.

Sensing a story, all forms of media showed up. Martin Galvin, spokesman for Irish Northern Aid at the time, did an interview with the BBC. The headline of The New York Post the next day read “Irish Rebels Greeting is Flashed in Times Square,” the Daily News ran with “IRA Lights Times Square,” and The New York Times led with a more restrained “Northern Ireland Above Times Square.” The London Daily Telegraph reported that the American ambassador to London, Mr. Charles Price, reassured Prime Minister Margaret Thatcher that the electronic signboard in New York giving Christmas greetings to Irish “Prisoners of War” bore no relation to what the vast majority of Americans thought.

My personal best moment of the day was sitting with Big Bernie in the local Blarney Stone in Times Square, watching TV and seeing Bill Beutel of NY Channel 7 news fame giving the teaser: “IRA hijack sign in Times Square, more at 11.” We let out a yell, and after we told the Irish bartender why we were yelling, all beers were on the house.

Meanwhile, out in Times Square, someone who apparently did not like the sign had called in a bomb scare to One Times Square, and every one was on the street. One of the representatives of Spectacolor was being interviewed and was asked what the initials UTP meant. He said that it must mean “Up the Pope,” apparently being unfamiliar with the Republican cheer “Up the Provos.”

Needless to say, it was the last time an Irish political ad ran in Times Square. Irish Northern Aid wanted me to see if it could be done again, this time in support of Michael Flannery who had just been acquitted of gun running in Brooklyn, but I was out of the Times Square sign business. Now these 30 years later, driving through Times Square in my yellow cab, I can’t help but think of my friend Brian Mor Ó Baoighill, and the time we made world-wide news. It was an unforgettable and unrepeatable moment in time. JMcD

Here is a news report from that day, including the full 27-second Christmas greeting to Irish republican prisoners worldwide:

Fascinating story.  I was just a youngster when all this was going on, so it's interesting to read about these things.  Thanks for sharing it here, John.

What a crass waste of $2,000. Still it caused less harm than the Noraid cash that paid to blow to bits the little boy who was out shopping for a Mother's Day card for his soon to be bereaved mother. [The Mother's Day bombing incident in Warrington, Lancashire, in case you have forgotten. Warrington has a large Irish population, some of whom were badly hurt in that attack].

The best use of Noraid money in my opinion was the pipe bomb attack on Heathrow which launched missiles at incoming (from America at that time of the day) aircraft.  It caused no damage whatsoever but, oh my, how we airport staff smirked when we saw the New York passengers disembarking, 'all shook up' and needing the bathroom to change their underwear. I am guessing those shocked Irish Americans would have thought twice about putting money in the terrorists' collection boxes in the Bronx bars thereafter.

I had hoped US opinion on funding terrorism would have changed since terrorism reached American shores. You may be assured however that those of us who do not agree with British and American troops' presence in Iraq (chasing non-existent  weapons of mass destruction and now inexplicably seeking to replace a dictator with a fundamentalist Al Quaeda regime) would not put money in Al Quaeda collection boxes. Those of us who actually hold Irish passports (not certificates of Irishness), and who have seen at first hand the damage which ill considered political donations can do, would rather you had spent that $2,000 on drink and recycled it down the drain.

And in case nobody stateside has heard the news of the latest attrocity:   http://www.bbc.co.uk/news/uk-northern-ireland-25380873

2,000 of 1983's dollars would be equivalent to approximately 4,700 of today's dollars.  You might get about one minute on a billboard in Times Square for that these days, but as mentioned in the article ... it's a vastly different place.

God bless America, I am an Irish pyschotherapist who has just completed a scientific hypothesis that war and conflict are generated by forces from within the human mind. If any of the wild geese are interested is reading this short hypothesis my email address is: derryjonnie@yahoo.co.uk And I'll send you a copy, Dia guit, Jonnie

Mush as I love Ireland ; I am in agreement with DJ Kelly above... The people of Northern Ireland have at long last gained some momentum of peace , lets just pray that it lasts.