This event was the launch of a collection of short fiction by 30 Irish authors.  The book’s subtitle intrigued me: “Dark Fiction from the West of Ireland.”  The festival program elaborated: “...stories filled with menace and intrigue, with wit, wind and rain.”  I bought a copy that night, and immediately read the first story in the collection, while waiting for the program to begin.  That first, very brief piece was everything short fiction should be;  surprising, satisfying, and well ... short!  I cannot tell you anything else without ruining your experience.  When you read it, you’ll see why it was chosen as the appetizer for the collection, and why the editor of Noir by Noir West dedicated the book to its author, Gerry Galvin, recently deceased.  Later that evening I had the pleasure of hearing the same story read aloud by Galvin‘s daughter, Cristina, an author in her own right with a piece in this collection.  I am eager to read the rest of the book, especially as the table of contents has promised me another tale by Gerry Galvin as the finale.

The Over the Edge Showcase

This reading by emerging poets and fiction writers was my favourite event from last year’s festival.  I didn’t feel that the group who read this year was quite as strong.  The most enjoyable work was by chemical engineer Colm Scully, who won the Cuirt New Writing Prize in the poetry category this year.  You can read Scully’s work here ... although it won’t be the same without his blue-collar Cork accent.  Even if you aren’t usually a poetry-buff, you’ll be won-over by his humour, and his accessible style and themes.

The winner of the prize for fiction is also worth a read; Philip Connor’s dystopian tale, “Not for Me”  will leave you wanting to hear more from its young author.  I was less impressed by the American on the panel, an apologetic emigrant called Jennifer Matthews.  The poems she read present the United States as typified by bare-handed catfishermen and the Westboro Baptist Church, and project the laughable notion that the conservative viewpoint is the only one tolerated in her native land.  We could do with more artists who’ve lived in both places examining the spaces between the myriad American and European cultures.  My complaint is that Matthews would do well to echo the nuance of the actual situation in her poetry, rather than painting America as the land of the intolerant and intolerable while patronising the Irish as charmingly quirky.

Periphery, Karma and Violence with Craig Davidson and Colin Barrett 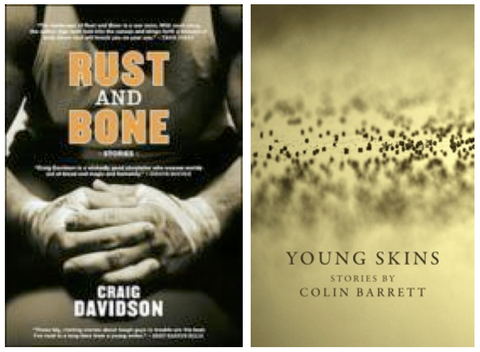 This event was a reading and discussion with two authors.  Canadian Craig Davidson read from his book "Rust and Bone," and up-and-comer Colin Barrett from County Mayo introduced readers to his first published collection: "Young Skins."  Both authors see the world as a place of brutality.  Davidson’s reading (an excerpt that included an amputation-by-Orca) enthralled me; but if you pick up his book, be prepared to enter a “savage world populated by fighting dogs, prize fighters, sex addicts, and gamblers.”  I’m not sure I want to live there, but there is an Oscar-nominated film version of "Rust and Bone," if you just want a two-hour visit.

Before attending the event, I had already read Barrett’s collection.  "Young Skins" is set mainly in a fictional County Mayo town with a small population and a disproportionate body-count.  There is a lot of addiction, and a lot of blood.  The most compelling story is called "Calm with Horses", a chapter in the life of a drug dealer’s hired thug.  Barrett manages to humanise this character, a role most often treated as an emotionless part of the scenery, by placing the “muscle” in the centre of the story, and making him the father of an autistic son.  Overall, the book is a depressing look at the lives of the young in contemporary post-boom Ireland.

After listening to Barrett talk about his work, I have a better understanding of the sadness it brought out in me.  The author noted that his work is “post-Christian,” meaning that the role of the church is not prominent in any of his characters’ lives.  There are no priests, which is a departure from generations of Irish literature, and all of the families in the book are in various stages of dysfunction.  Barrett explained that these characters inhabit a world where the old structures (church, family, etc.) are stripped away.  They are left to cobble together a family, a morality, and a life from whatever is left.  This is not working out well for Barrett’s “young skins.”  They try in vain to fill the void with drugs or fame.  They lust, but don’t love.  They want sex like an alcoholic wants his drink: cheap, abundant, mind-dulling, and meaningless.  They kill others or they kill themselves.  I don’t think Barrett is advocating a return to traditional values; like his characters, he seems simultaneously to be repulsed by structure, and craving it.  I fear that Barrett has tapped into the true condition of many young Irish souls.  Thankfully, I know that Irish youth is not a monolith, and that many young skins are writing a different story.

This collection of over 400 traditional Irish sean nós songs is the most comprehensive effort of its kind.  It also includes notes on the origins of the songs and their composers, as well as photos and information on the people keeping the tradition alive today.  At the event, we were treated to a trio of singers who exhibited Connacht, Ulster, and Munster dialects:

Micheál Ó Conghaile, the curator of this paper museum, says it best:

('These are the songs that, at times, kept the people alive. Songs that gave comfort, solace, courage, pleasure and hope when times were hard. They were songs to raise the spirit and the people held them to their hearts. These songs are as compelling today as they were in times gone by.')

This is just a taste of all that was on offer to those who dared to “go Cúirting” this year.  I haven’t even told you about my favourite event, Coffee and Cronuts with Sam Lipsyte.  After the effusive apology for the absence of cronuts, (apparently Galway is bereft of the fusion pastry) listening to Lipsyte read from his sardonic short stories made me an instant fan.  I’m not elaborating on this event for The Wild Geese because it doesn’t feature any Irish authors, but his book The Fun Parts has been added to a reading list that Cuirt continues to lengthen and enhance.  Come see for yourself next year - Cúirt 2015, Galway!