The Wild Atlantic Way will be Ireland’s first long-distance driving route, stretching from the Inishowen Peninsula in Donegal to Kinsale in west Cork.  With a launch date of March 2014, this route consists of existing roadways, but it will offer visitors an opportunity to truly discover the west coast.  The final route stretches out over 2,500 km (1,500 miles) and includes 156 strategically placed discovery points along the course (click on the map below to see the route in detail). 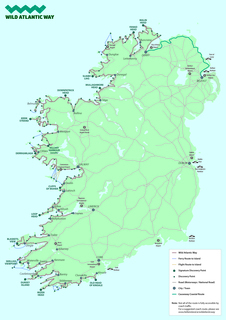 The Wild Atlantic Way will be the longest defined coastal drive in the world when it officially debuts in this March.  Between the charming towns and villages of Ireland's west coast are some of the most breathtaking landscapes on the planet.  From Slieve League (Sliabh Liag) in Donegal, you'll pass through the rugged beauty of Connemara, the Burren, and down through the "Kingdom" of Kerry.  Explore the peninsulas of the southwest -- Dingle, Iveragh (better known as "The Ring of Kerry"), and Beara.  This is not to mention some of the more off-the-beaten-path destinations in Sligo, Mayo, Clare, and Limerick.

Paddy Mathews, Manager of Destination Development with Fáilte Ireland, believes the project will be a great addition to what Ireland has to offer visitors -

“Developing a route like this is an important part of ensuring Ireland is able to provide visitors with an unforgettable experience. It will open up a huge number of towns and attractions to them and showcase the scenery and unique culture of the West Coast of Ireland providing easy access to a range of experiences along the route.

From a personal standpoint (and as one who lives directly on this newly designated route), I will be curious to see how it increases the traffic and tourism in the area (which was already robust ... especially during the "high season" of June, July, and August).  I am of the opinion that the best Ireland has to offer can be found in the west -- be it music, language opportunities, arts, cuisine, scenery, adventure activities, etc.  This newly designated travel route will undoubtedly make visitors more informed and their itineraries more efficient.

Here is a series of four videos showcasing The Wild Atlantic Way produced by Fáilte Ireland:

i've done that trek twice. i wandered off every road many times on sheep paths. fabulous. glad i made it before the crowds come.

in fact i've gone all the way around the coast.