I'm a musician by trade but have also worked a good bit in documentary film over the last few years. Hy Brasil, as well as being the title of my new album, is an island from Irish mythology. "That shadowy isle" appeared on maps until the 1860's until they realised that it wasn't there at all, as such, I use it to symbolise in a nebulous way the hopes and dreams of the Irish who immigrated to Latin-America. In that vein, for example, the only instrumental track of the album is called "Country of Clouds."

The first song I wrote about this theme of the Irish in Latin America was in 2000. I read a book by Michael Hogan called "the Irish Soldiers of Mexico" and was taken to write a song about those brave San Patricios. Its strange to think that from singing away to myself in an empty room in Glenbeigh, County Kerry, I would 10 years later be in Mexico (for the 200th anniversary of Independence) presenting a documentary on the subject for Irish Gaelic T.V. Songs travel and men travel with them! Another song of mine "Marine Mambí, Johnny Dynamite" was the inspiration for the film "A Captain Unafraid" which I produced and directed. That documentary told the story of Dynamite Johnny O' Brien, a New York sailor who was heavily involved in the 19th century Cuban War of Independence. Uncovering Dynamite John's story took me from Kerry to Cuba and New York to Calcutta. The film won best documentary at the Calcutta Cult Film Festival, closed the 18th Kerry Film Festival (in 2017) as well as being part of the official selection of the Dumbo (N.Y.) Miami Independent Film Festival in 2019. The image above was taken by Pat Hartnett, A Captain Unafraid cameraman. That's myself on the right dwarfed by the statue to José Martí in Revolution Square in Havana.

I get a lot of inspiration from old Irish songs, history, poetry and music. For instance, there is a song "Hy Brasil, The land of the Blest," that I've recorded for this new album. The song was written in the early 1800's by Limerick man, Gerald Griffin, the main thoroughfare in that city is called after him. The Land of The Blest is not at-all well known now but was popular in my father's time when they learned the words in school. I find inspiration in overlooked stories, Ireland being a small island and mostly former British colony we are often misunderstood, I think delving into these outlying areas of Irish history (such as the story of the Irish in Latin America) help to redress the balance.

If anyone is curious as to what it is that attracted me to the story of the Irish in Latin America, I would say, funnily enough it was probably those original "Wild Geese" "a fuair gradam sa Fhrainc 's sa Spáin." After the fall of the old Gaelic order in the early 1600's one of the main destinations for Irish political refugees was Spain, which was full tilt in its conquest of the Americas at the time. So you find Irish names cropping up in seminal moments all over Latin America. The last King of New Spain (Mexico) was Juan O'Donojú O'Ryan. Miguel Barrigán was another Mexican president in the 19th century. Alvaro OBregón (O' Brien) is a more recent president with an Irish second name. The tradition was so well known that Vicente Fox (president from 2000-2006) always said he was of Irish extraction though it was later found out his people came from Germany (Fuchs). Even the famous Zorro is said to be based on the Irishman William Lamport, hero to the downtrodden of New Spain, burnt at the stake by the Spanish Crown in 1659. 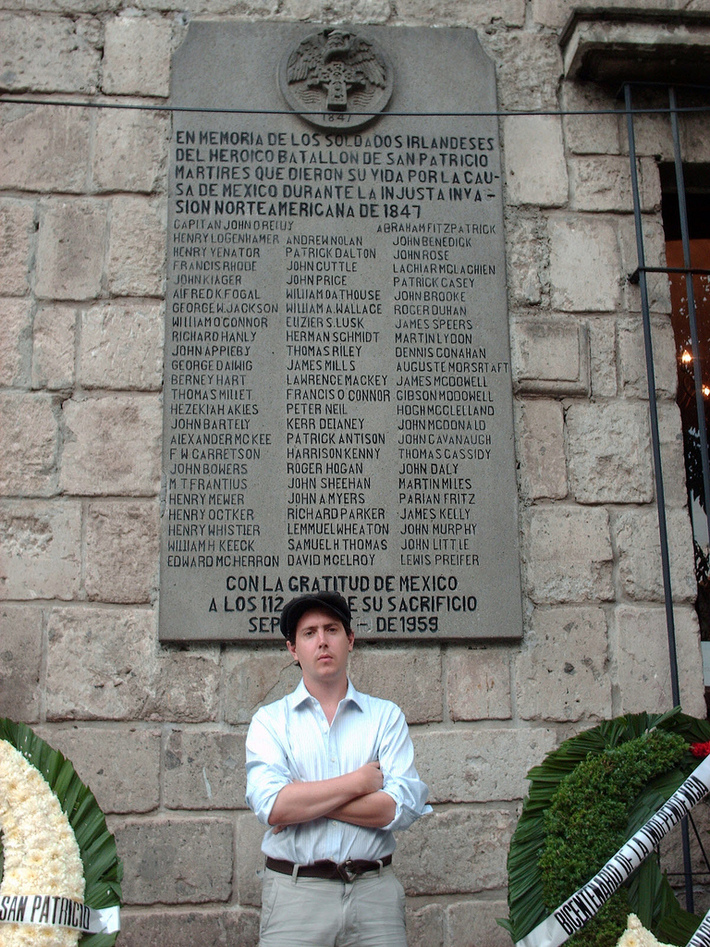 Latin America appeals to me as the Irish, though having the Saxon as their stereotypical enemy end up being lumped constantly in the anglo ranks when looked at from outside the small sphere of our island nation. The Latino world is an escape from all that, plus Ireland politically has a-lot more in common with the post colonial nations of south-America that the neo-colonial powers of the north.

I've been collecting these songs and stories bit by bit over almost 20 years. I've found many of them in books. Two (from the Pampa's of Argentina in 1870's) were collected by Edmundo Murray (founder of "the Society for Irish Latin American Studies") from an old Newspaper from the countryside outside of Buenos Aires.  One is an old Irish poem "I Sasana na Séad" by Eoghan Rua Ó Súilleabháin translated into Spanish with musical accompaniment. Of the 15 tracks, 8 of them I wrote myself. The sound, though it draws strongly from the Irish tradition, is more modern folk. I was always drawn to the more creative side of music, rather than rehashing traditions museum like. I grew up as much on American music as Irish music, only when I left Ireland for Spain in the early 2000's did I probably start to look fondly back on "the Home I left behind." I don't worry too much about being true to the pure drop tradition. Though I respect it highly, I feel its much more important to be true to the soul of the song than the exact sounds. In Ireland within the traditional Irish community you do sometimes get rehashing of old songs and the people aren't at all engaging with the original meaning. I feel the music (in a country of many broken things) is something unbroken to connect us back to our past and our people, you just have to listen to the words. Of course since we don't usually speak Irish in Ireland we are already syphoned from the source on that score. The words were always the most important thing in old Irish songs, I feel thats being lost in this new highly image conscious society too. If you take the first verse of this Argentinian version of "The Home I left Behind," if you don't engage with the words you don't engage with the soul of the man that first composed that song in the 1870's on the Pampa's plains.

The album will be released in October and is available to pre-order now on bandcamp.