In the last 5 years or so my Dad has done a ton of work on genealogy. He has done both his side and my Mom's side. It's been fascinating to learn all of the stories. My Dad's side is from 100% Irish lineage. My Mom's side contains Greek, German and other heritages. I hope this doesn't diminish my standing here :).

I live in Iowa and I've always felt drawn to this area. I've lived in other places but always been in the Midwest and never that far from the Mississippi River. I always thought the Midwest and these mid-size cities just happened to suit my personality and tastes. After learning about my ancestry I began to wonder if maybe it is something deeper than that.

A lot of my ancestors were also drawn to the Midwest, and the Mississippi River valley. My great-great-great grandfather was Patrick Finnegan. His father and two sisters died during the potato famine in Ireland. So his mother sent him and two of his brothers -- Owen and James -- to America. They ended up settling in St. Louis and renting a place to live. Once they were settled, their mother and three brothers -- Michael, Lawrence and Stephen -- came over via the port of New Orleans. The brothers worked on the docks in downtown St. Louis unloading boats. Patrick earned enough money to build a home in St. Louis. Many of my ancestors lived in this home for several decades. My Dad remembers visiting this home when he was a child. I can't help but feel a connection to the Finnegan brothers, since I also come from a large family (4 boys and 1 girl). I'm the oldest, like Owen Finnegan would have been. By coincidince (?) we named our first son Owen Michael, before I ever had heard of Owen or Michael Finnegan. These are our son's great-great-great-great uncles. 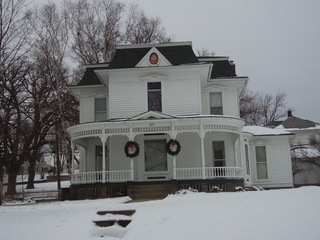 My Mom's ancestry also has ties to this area. I was blown away when I learned about Charles E. Langford. He is my great-great-great grandfather on my Mom's side. He once operated a large lumber mill in Clinton, Iowa, only 45 minutes away from my hometown of Davenport. Lumber from Minnesota would be floated down the Mississippi River and cut into usable building materials at several large lumber mills in Clinton. Clinton's lumber industry was so big at that time that it produced one of the highest number of millionaires per capita in the country. Here is a link to my Dad's blog post about Charles E. Langford. Alongside this post is a picture of his home, which is still in good condition today, across the river in Fulton, Illinois. In addition to happening to live in the same area, I also have a entrepreneurial streak I may have inherited from him. He tried to stake his claim in the new industry of lumber, and I have tried staking my claim in the new industry of 3D printing by starting a small business. He lived in the Clinton area for a number of years before moving to California to seek other opportunities.

There is one last tie to the Mississippi River Valley that is interesting. There is an ancestry link although not a direct genetic link like the two examples above. My Mom is the second cousin, three times removed, of Mary Ann Angell Young. Mary Ann was married to Brigham Young, one of the leaders of the Mormon Church. The Mormons had faced persecution and were forced to migrate again and again to new places. They lived in various places across the country as they migrated West. Nauvoo, Illinois, was one of those places they lived. They thought it would be a safe haven, again, right on the Mississippi River. They built a town and a church there but were once again forced to move on after just six years. Here is a link to my Dad's blog post about Mary Ann Angell Young.

In all, it has been very interesting to learn all of these things. I was very surprised to learn I may have so many same traits as my ancestors, living in the same areas they did, and even using some of their names.

Nice one, Mr. Foley. The part where you named your son Owen Michael gave me absolute chills. I got it! Now I'll report something similar: although my name is Claire ( after my mother's mother, who was named after County Clare, my mother believed) I was given the nickname Doona. I think my mother thought when I was small that the name Claire was too large to handle, or perhaps too formal. I asked her a few times where in the world she came up with my nick-name, and she always claimed some little nursery rhyme she made up, yet she wasn't quite sure. The first time I saw Doonagore Castle, along the side of the road in County Clare, I knew with a certainty that my mother had made some fey move of ancestral connection. Or at least, this is what I think! Thank you for your post! It was heart-warming.

Wow, that's a neat story, too! I'm glad you liked my post.

Hello Claire Fullerton ; as a child growing up in Ireland ; it was not unusual to hear adults and my Granny ; calling the littlest  of a family 'Dunnie' . It was their attempt to underline how small they were in comparison to their  siblings .

Now I am not sure how to spell  'dunnie' as I never came across it in books or any research I have done.

I suspect somewhere in your Mom's unconsciousness mind ; she was harping on about names that had no spelling in Ireland of any era ; never mind hers . Hope this helps with your nick -name

Oh, I love what you've written and thank you for it, and I've leaned something here. It comes as no surprise that there is an Irish connection to a name off-handedly bestowed upon me. It somehow makes me feel meaningfully placed in the world if that makes sense. And further, who else but my fellow Geese would be possibly qualified to comment on this? Thank you so very much!