Just over 200 years ago this past January came a climactic moment in military history with numerous surprising Irish connections.  The battle fought by Andrew Jackson that saved New Orleans also brought closure to a remarkable series of encounters in, of, and related to Ireland.

Andrew Jackson’s Scots-Irish parents lived in Boneybefore, Co Antrim, from which they left for the Carolina colonies in 1765.  The future general and president was born in the American colonies on March 15, 1767.

Some 12 years later, the American Colonists were fighting for independence from Britain and young Andrew Jackson joined his older brothers in the ranks of the local North Carolina militia.  The youngster would serve as a courier.  At the Battle of Stono Ferry on June 20, 1779, Andrew and his brother Robert were captured.  Their brother Hugh Jackson died from heat exhaustion in the battle.

In July, 1779, Lieutenant-General Sir Charles Cornwallis rejoined General Clinton, the overall British commander, in theSouthern colonies.  The two generals launched ‘the southern strategy’ which brought a large force south to successfully besiege Charleston early the next year, 1780.  The American commander, Major General Benjamin Lincoln, surrendered on May 12 along with some 5,000 American troops – a tragic record that would stand for almost one hundred years.

Clinton turned the South over to Cornwallis, along with a modest force of 3,000 British, Hessian, and provincial troops, and returned to New York.  Cornwallis expected to recruit more Southern Loyalists to expand his numbers.  In August 1780, Cornwallis routed General Horatio Gates’s larger but relatively untried army at the Battle of Camden.  With the rebellion in the South fading way, the British advanced into North Carolina.

But efforts to recruit Loyalists were dealt significant blows when a large gathering was defeated at Kings Mountain, only a day's march from the main army, and then another large detachment was decisively defeated at Cowpens.  Cornwallis then clashed with the rebuilt Continental army under General Nathanael Greene at Guilford Courthouse in North Carolina, winning a Pyrrhic victory with a bayonet charge against a numerically superior enemy.

However, the constant marching and fighting fatigued Cornwallis’ army and he was in growing need of resupply.  Having moved to Wilmington on the Carolina coast, Cornwallis received dispatches informing him that another British army under Generals William Phillips and Benedict Arnold had been sent to Virginia. Cornwallis decided to join forces with General Phillips, a personal friend, but Phillips died the week before the rendezvous.  Cornwallis took command of the entire force.

In March 1781, Washington sent the Marquis de Lafayette to Virginia with 3,200 men to challenge the 7,200 troops now under Cornwallis.  Lafayette restricted himself to skirmishing with the British while also gathering reinforcements.  Clinton, in New York, now ordered Cornwallis to choose a position on the Virginia Peninsula—referred to in contemporary letters as the "Williamsburg Neck"—and construct a fortified naval post to shelter ships of the line.

At about that same time, Elizabeth Jackson secured her sons’ release, but Robert Jackson died on April 27, 1781.  Knowing that Andrew would recover, his mother volunteered to nurse the British-held American prisoners of war, suffering from an outbreak of cholera on the two prison ships in Charleston.  However, she fell ill herself and died from the disease in November 1781.  Earlier, while captive, Jackson reportedly refused an order by Major Coffin (of the loyalist units) to clean his boots.  The angry American-born British officer lashed out with his sword, leaving young Andrew with scars on his head and left hand – and this along with his family losses set him firmly against Britain for the rest of his life. 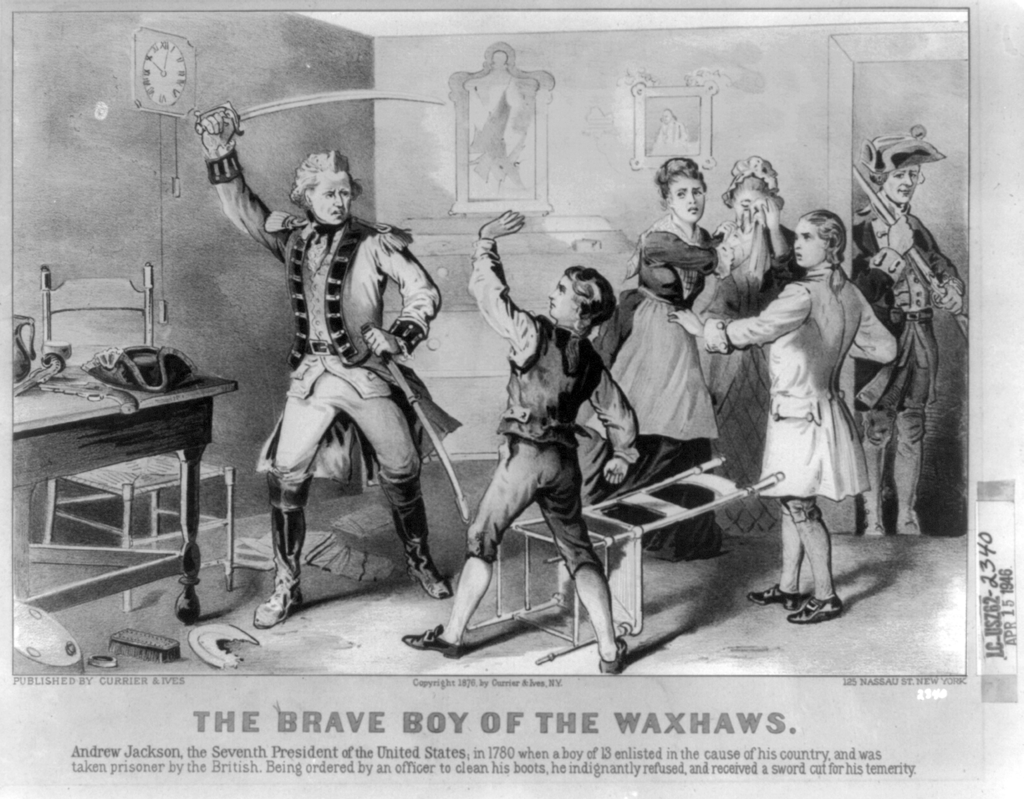