It was not uncommon for Queen Victoria’s soldiers to be Irishmen or to have Irish connections, but few of them had a career such as that of Field Marshal Frederick Sleigh Roberts, 1st Earl Roberts VC, KG, KP, GCB, OM, GCSI, GCIE, KStJ, VD, PC – that first pair of letters “VC” signify that he was also a recipient of the Victoria Cross (for Americans think Congressional Medal of Honor). The letters “KP” also indicate that he had been named a member of the Order of St Patrick.  He was loved by his troops and immortalized by Rudyard Kipling – and you’ve probably never heard of “Bobs.”

Although he was born in Cawnpore, India, both of Roberts’ parents had Irish roots.  His father, General Sir Abraham Roberts, was a native of County Waterford while his mother, though born in Edinburgh, was the daughter of Major Abraham Bunbury from Kilfeacle in County Tipperary.

Schooled at Eton and Sandhurst, Roberts would follow in his father’s footstep and join the East India Company army’s Bengal Artillery, later transferring to the Bengal Horse Artillery.   This placed him in the middle of Indian Mutiny of 1857, launching him on a career that would see him fighting Britain’s colonial enemies in India, Abyssinia (Ethiopia), Afghanistan, and South Africa.  He would earn the Victoria Cross for single-handedly attacking two mutineers and recovering from them a British standard they had captured. 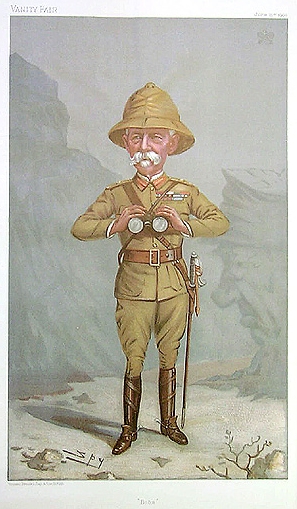 Transferring to the British Army as the armies of India were disbanded after the crushing of the rebellion in India,   Roberts would go on to serve in the Expedition to Abyssinia and the Second Anglo-Afghan War before leading British Forces to success in the Second Boer War. He also became the last Commander-in-Chief of the Forces before the post was abolished in 1904.

In South Africa, Roberts would be immortalized by two events – Rudyard Kipling’s poem and the general’s decision to introduce ‘concentration camps’ in his campaign to finally break the Boer Commandos and force them to surrender.  The plan was to deprive the Commandos of the support of the local population by concentrating that population, mostly women and children, in camps where the British would house and feed them and isolate them from the Boer fighters still in the field.  The Spanish had used the same idea in their struggle with Cuban rebels on that Caribbean Island.  Unfortunately for the reportedly more than 26,000 Afrikaans women and children who would die in the South African camps, Roberts and his successor in command General Kitchener failed to learn from the Spanish experience in Cuba about just how hard this plan was to successfully execute and he failed to recognize and correct that failure.

In 1913, Roberts was approached by organizers of the Ulster Volunteers about becoming their advisor, he declined as being too old.  However, Roberts recommended another old India Army hand, Lt-Gen Sir George Richardson.  Roberts would later find himself entangled in the Curragh incident when he strongly urged and warned the government and the Chief of the Imperial General Staff against using coercion to disarm the Ulster Volunteers and against splitting the British Army in the attempt.  Although no longer on active service and given no role in the war by the government, Roberts was in France visiting the Indian troops fighting the war there when he died of pneumonia at St Omer, France, on 14 November 1914.