When it comes to astronomy, Ireland is blessed with many brilliant, world changing individuals, whose driving ambition was to make a difference and improve the world. One particular woman from Lurgan in Co. Armagh, Ireland is certainly at the forefront of what was once a mostly male dominated science. Her discovery, despite being described as "one of the most significant scientific achievements of the 20th Century" was overshadowed by her male contempories and thus her discovery was denied a Nobel Prize in Physics. As a postgraduate student, this woman discovered the first ‘radio pulsars’ in 1967 emanating from deep space. The discovery was recognised by the award of the Nobel Prize in Physics to her thesis supervisor Antony Hewish and to the astronomer Martin Ryle. The woman was excluded, despite having been the first person to observe and precisely analyze the pulsars, a crystal-clear case of male chauvinism.

Jocelyn Bell was born on July 15, 1943, in Lurgan, County Armagh, Ireland to M. Allison and G. Philip Bell. Her father was an architect who had helped design the Armagh Planetarium, and during visits she was encouraged by the staff to pursue astronomy professionally. As a young girl Jocelyn also discovered her father's books on astronomy. She grew up in Lurgan town and attended the Preparatory Department of Lurgan College from 1948 to 1956, where she, like the other girls, was not permitted to study science until her parents protested against the school's policy. Previously, the girls' curriculum had included such subjects as home economics, cooking and cross-stitching rather than science. She failed the eleven-plus exam and her parents sent her to the Mount School, York, a Quaker girls' boarding school. There she was favorably impressed by her physics teacher, Mr. Tillott, and said of him “You do not have to learn lots and lots of facts; you just learn a few key things, then you can apply and build and develop from those. Mr. Tillot was a really good teacher and showed me, actually, how easy physics was. A publication announcing the discovery of pulsars had five authors including Jocelyn Bell. Hewish, her supervisor’s name was listed first, and Jocelyn Bell's second. Hewish was awarded the Nobel Prize, along with Martin Ryle, without the inclusion of Bell as a co-recipient. Many prominent astronomers criticized this omission, including Sir Fred Hoyle. In 1977, Bell herself played down this controversy, saying, "I believe it would demean Nobel Prizes if they were awarded to research students, except in very exceptional cases, and I do not believe this is one of them." The Royal Swedish Academy of Sciences, in their press release announcing the 1974 Nobel Prize in Physics, cited Ryle and Hewish for their pioneering work in radio-astrophysics, with particular mention of Ryle's work on aperture-synthesis technique, and Hewish's decisive role in the discovery of pulsars.

It was in July 1967, as she scanned the night sky with a powerful telescope, that she detected a bit of "scruff" on her chart-recorder papers that tracked across the sky with the stars. She established that the signal was pulsing with great regularity, at a rate of about one pulse every one and a third seconds. Temporarily dubbed "Little Green Man 1" (LGM-1) the source (now known as PSR B1919+21) was identified after several years as a rapidly rotating neutron star. This was later documented by the BBC Horizon series. She worked at the University of Southampton between 1968 and 1973, University College London from 1974 to 82 and the Royal Observatory, Edinburgh (1982–91). From 1973 to 1987 she was a tutor, consultant, examiner, and lecturer for the Open University. 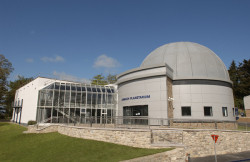 In 1986, she became the project manager for the James Clerk Maxwell Telescope in Mauna Kea, Hawaii and was Professor of Physics in the Open University from 1991 to 2001. She was also a visiting professor in Princeton University in the United States and Dean of Science in the University of Bath (2001–04), and President of the Royal Astronomical Society between 2002 and 2004. Bell is currently Visiting Professor of Astrophysics in the University of Oxford, and a Fellow of Mansfield College. She was President of the Institute of Physics between 2008 and 2010. In February 2018 she was appointed Chancellor of the University of Dundee. In 2018, Bell Burnell visited Parkes, NSW, to deliver the keynote John Bolton lecture at the CWAS AstroFest event.

That she did not receive recognition in the 1974 Nobel Prize in Physics has been a point of controversy ever since. She helped build the four-acre radio telescope over a period of two years and initially noticed the anomaly, sometimes reviewing as much as 96 feet of paper data per night. Bell later claimed that she had to be persistent in reporting the anomaly in the face of skepticism from Hewish, who was initially insistent that it was due to interference and man-made. She spoke of meetings held by Hewish and Ryle to which she was not invited. In 1977, she commented on the issue:

"Demarcation disputes between supervisor and student are always difficult, probably impossible to resolve. Secondly, it is the supervisor who has the final responsibility for the success or failure of the project. We hear of cases where a supervisor blames his student for a failure, but we know that it is largely the fault of the supervisor. It seems only fair to me that he should benefit from the successes, too. Thirdly, I believe it would demean Nobel Prizes if they were awarded to research students, except in very exceptional cases, and I do not believe this is one of them. Finally, I am not myself upset about it – after all, I am in good company, am I not!”